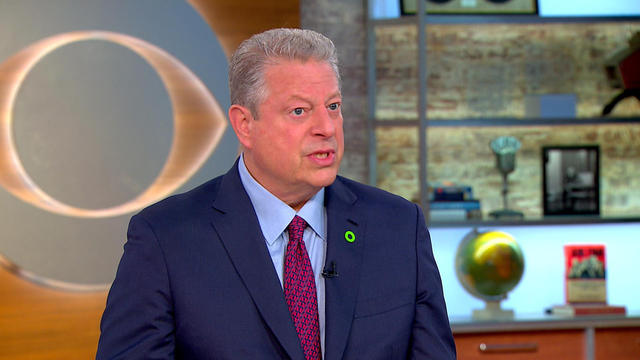 While President Trump has made clear to the world that his administration will not support the Paris climate agreement, former Vice President Al Gore says he still has hope as a surge of activism has sprung up in reaction to Mr. Trump's policies.

"Even though President Trump announced he was going to pull out of the Paris agreement, the very next day the world doubled down on their commitment," said Gore on "CBS This Morning" on Wednesday.

Gore applauded the work of state governors and local mayors who are committed to combatting the effects of climate change, saying, "It now looks as if the U.S. has an excellent chance to meet our commitments under the agreement, regardless of President Trump."

He said, however, even with the commitment of world leaders across the globe, "it's still not enough," but the support "lays a strong foundation on which to build stronger action."

"The world would benefit from U.S. leadership, but Tump is on other side of that," added Gore.

It's been over a decade since Gore's film, "An Inconvenient Truth" was released, highlighting the imminent impacts of climate change, and now, Gore says, extreme weather conditions linked to these changes have become "way more serious and common."

Gore's new film, "An Inconvenient Sequel: Truth to Power", which serves as a follow-up to the 2006 release, highlights the continuing efforts to combat the effects of climate change across the country.

The former vice president says America needs to first "get over this phony discussion of 'is this real.'"

"These persistent levels of denial unique in the U.S. have been intentionally created by the large carbon polluters taking the playbook from the tobacco companies, hiring pseudo-scientists and putting out false data and all of us, as human beings, are resistant to thinking about something that's hard to think about," said Gore of climate change deniers.

He added, "If they can put out some false doubt, a lot of people will go, 'Oh, OK, we don't have to worry about this now' — but we do, because it's here now."

Those "persistent" deniers Gore refers to are even found in Mr. Trump's own cabinet — a situation Gore called "horrible"

"The president has surrounded himself with a 'rogues gallery' of climate deniers coming out of close ties with the carbon polluters," said Gore.

But Gore says that the recent uptick in support from a majority of Americans to find new ways to prevent the effects of climate change offers hope for the future.

"Carbon polluters have taken control of some parts of our democracy. We need to take it back. And this upsurge of activism is really encouraging."