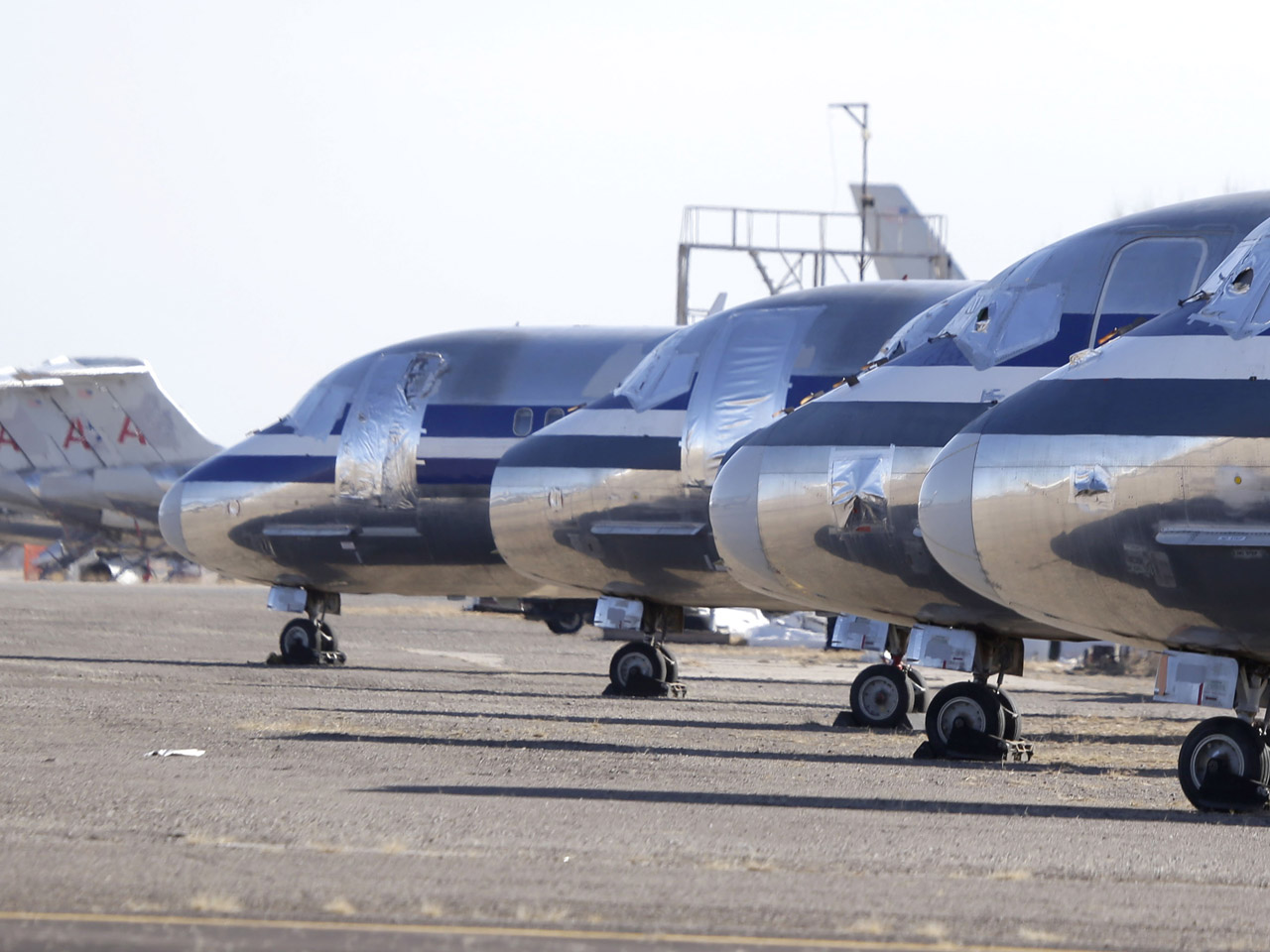 Outside the cockpit window sit nearly a hundred airplane carcasses, perfectly lined up. They are jets that nobody wants anymore. And -- after 26,057 takeoffs and landings -- this 24-year-old American Airlines plane is about to join them.

"This is my first time here, and it's a sad place," First Officer Robert Popp tells the control tower. Airlines used to store planes in the desert during slow travel months. Sometimes, unwanted jets would be sold to carriers in Russia or Africa. Today, a man on the other end of the radio responds, "they're chopping them up."

Airlines are on the largest jet-buying spree in the history of aviation, ordering more than 8,200 new planes with manufacturers Airbus SAS and The Boeing Co. in the past five years. There are now a combined 24 planes rolling off assembly lines each week, up from 11 a decade ago. And that rate is expected to keep climbing.

The new planes allow the airlines to save on fuel, now their biggest cost, while offering passengers more amenities -- some for a fee. Passengers can plug in to work or be entertained by a seat-back TV and fly some international routes nonstop for the first time. And the commercial divisions of Boeing and Airbus get a steady stream of cash for years, which is a key reason investors have doubled the companies' stock price in the past year.

The bulk of the planes are going to new or quickly-growing airlines that serve an expanding middle class in India and the rest of Asia. The International Air Transport Association expects the number of passengers worldwide to grow 31 percent to 3.9 billion in the next four years.

U.S. airlines are buying as well. After suffering through the Sept. 11 terrorist attacks, bankruptcies and recessions, they're now strong enough financially to buy new jets. Domestic carriers spent $11.6 billion last year on capital improvements -- including new planes -- up from $5.2 billion in 2010.

With the price of fuel nearly four times what it was 10 years ago, airlines need to replace aging gas-guzzlers -- like the American 757 that Capt. Wannberg parked in the desert in Roswell.

The plane showed its age. Many armrests originally came with ashtrays. The seatback pocket on 27D was hanging by its last thread. And the window shade at 1F wouldn't close. American would have had to spend $6 million to $10 million for heavy maintenance checks on the airframe, overhauls of the engines and other part replacements to keep the plane flying.

Instead, it went to Roswell. There, the dry air prevents the aluminum airframe from corroding. Spare parts will be harvested from the jet; eventually it will be chopped up for scrap metal.

It's a fate many U.S. planes are facing. On Monday, Delta Air Lines retired the last of its DC-9s, a 35-year-old jet that had been the workhorse of U.S. airlines for decades. Over the past five years U.S. airlines have retired nearly 1,300 other planes -- more than 20 a month -- to various desert facilities in the last five years, according to Flightglobal's Ascend Online Fleets, which sells and tracks information about aircraft.

American's old 757 will be replaced by one of 460 new single-aisle jets that the airline ordered in July 2011 -- the largest single airplane order in history. The first one entered service on Sept. 16, and American is currently taking delivery of an additional new plane every week -- models like the A321 from Airbus or the Boeing 737.

Southwest Airlines, JetBlue Airways, Spirit Airlines and just about every other U.S. carrier has a large order in place. Nearly 1,500 new planes will be delivered to U.S. airlines by Airbus and Boeing over the next decade. Several hundred smaller regional jets are also on order with other manufacturers.

"We are producing twice as many airplanes today as we were 10 years ago," says Mary Prettyman, Airbus' vice president of strategic marketing for the Americas. It will take Airbus eight years to fill all its current orders. "It's unprecedented."

The new planes cater to passengers' changing habits. Instead of reading a paperback book or magazine from the airport gift shop, travelers today are surfing the Internet or reading on their Kindle or iPads.

American designed the interior of its new planes with the concept that "your life should never be interrupted because you are flying," says Alice Liu, managing director for onboard products for the airline.

So this new generation of planes provide passengers with larger overhead bins, power outlets and USB ports, better lighting and a less-claustrophobic feel. There's also less noise and -- in many cases -- individual TVs.

"We want to give you a sense of as much space as possible," says Mike Henny, Delta's director of customer experience. "A darker space doesn't feel as spacious as a lighter one."

Some models can fly longer distances, opening up new nonstop routes. And the planes are more reliable, meaning fewer mechanical delays or cancellations.

Then there are the showoff features, meant to woo high-paying customers. First class passengers between New York and Los Angeles or San Francisco on American will benefit from an on-board cappuccino machine starting this week. JetBlue is adding four seats that will be walled off from the rest of the cabin with their own doors in its new premium cabin on the same routes starting with Los Angeles June 15.

The decision to buy new planes is being driven by high fuel prices, low interest rates and Wall Street financing mechanisms that allow airlines with junk bond ratings to borrow money at favorable terms. American was even able to borrow $2.7 billion for new planes while it was still in bankruptcy restructuring.

"It certainly is an opportunistic time. There's no doubt about that," says John D. Rainey, United Airlines' chief financial officer.

U.S. airlines burn through 16 billion gallons of jet fuel a year. A decade ago, they were paying 84 cents a gallon. Last year, paying more than $3 a gallon, U.S. airlines spent $50 billion on fuel.

To cut its fuel costs, United is replacing some of its domestic 757s with 100 new 737-900ERs. The planes burn 15 percent less fuel per passenger. There is also a significant maintenance savings. The 737's engines can run twice as long before needing a multimillion-dollar overhaul.

While each new plane -- which comes with a $96.1 million list price, though airlines always negotiate deep discounts -- United hopes to save nearly $2.5 million a year.