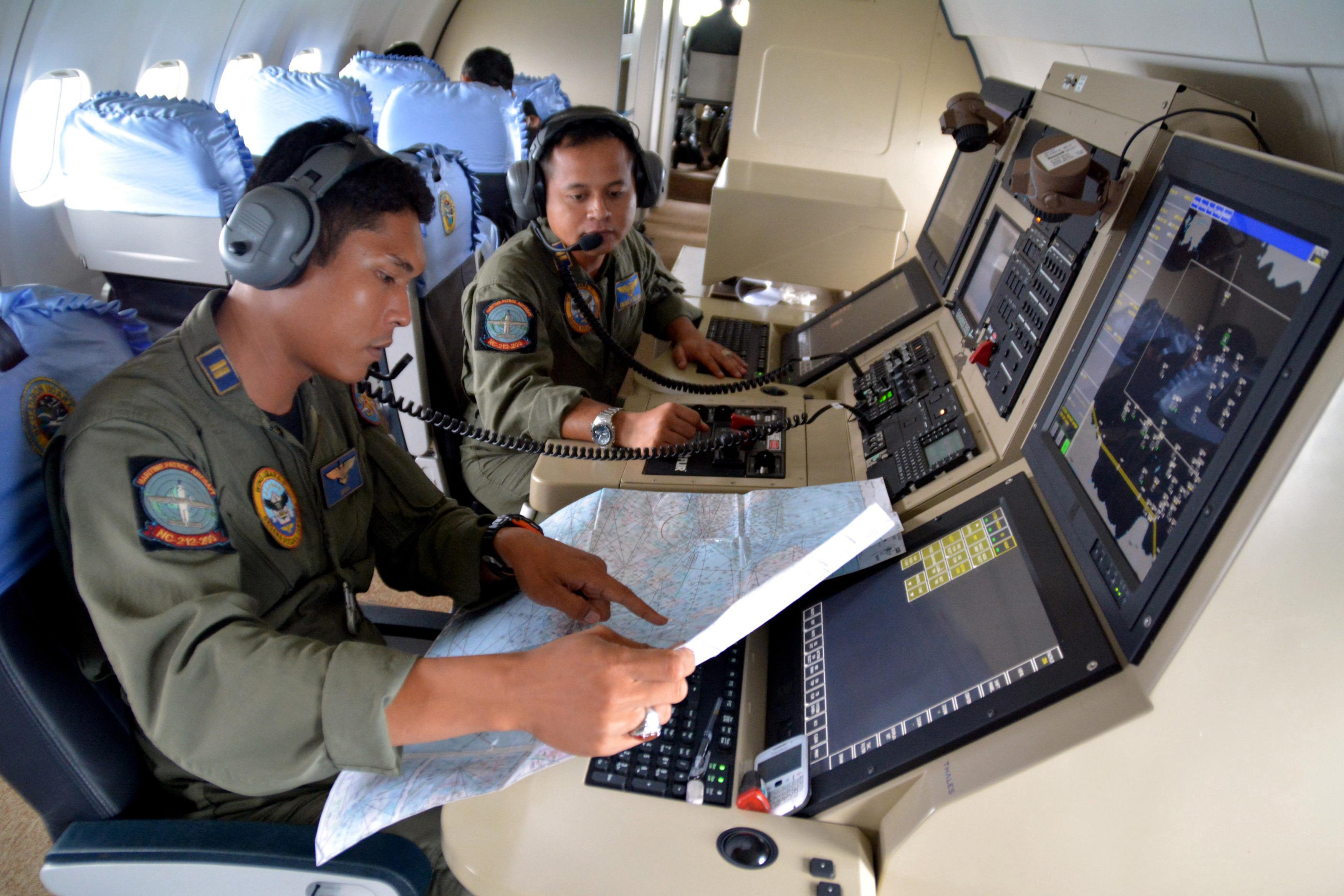 Rescue crews resumed searching on Monday local time in Indonesian waters for AirAsia Flight 8501 , which disappeared Sunday with 162 passengers and crew onboard.

The plane was flying from Surabaya, Indonesia's second-largest city, and was about halfway to its destination, Singapore, when it vanished from radar.

Q: What could have happened?

A: It is way too early to know for sure, but here are some options. The plane was in the safest part of flight - just 10 percent of fatal crashes from 2004 through 2013 occurred while a plane was at cruise elevation, according to a safety study published by Boeing in August.

Passing through bad weather such as severe thunderstorms could have been a factor. Airbus jets have sophisticated computers that automatically adjust to wind shears or other weather disruptions. However, weather - combined with pilot errors - has played a role in past air disasters that occurred at cruise elevation, including the 2009 Air France Flight 447 crash over the Atlantic Ocean.

Another possibility is some type of catastrophic metal fatigue caused by the cycle of pressurization and depressurization associated with each takeoff and landing cycle. This A320 had 23,000 flight hours and 13,600 takeoffs and landings. Many occurred in humid climate, which speeds corrosion. Still, metal fatigue is unlikely because this plane is only 6 years old.

Finally, there is the chance of terrorism or a mass murder by the pilot. There's no evidence of either action at this point, but neither can yet be ruled out.

Q: What did the pilots say to air traffic controllers?

A: The last communication between the pilot and air traffic control was at 6:13 a.m. Sunday (6:13 p.m. EST Saturday) when the pilot "asked to avoid clouds by turning left and going higher to 34,000 feet (10,360 meters)." Sometime between 6:17am and 6:24am, the flight lost contact with Indonesian air traffic control. There was no distress call, but pilots are trained to focus first on the emergency at hand and then communicate only when free.

CBS News aviation and safety expert Capt. Chesley "Sully" Sullenberger said in an interview on CBSN that "it's appropriate that these pilots requested deviation" and that not much should be read into the lack of a distress call.

"It's likely the pilots were busy with higher priority items," Sullenberger said, adding that he himself had 5,000 hours in that type of plane.

Q: Isn't this the third Malaysian jet to crash just this year?

A: Sort of. Malaysia Airlines Flight 370 disappeared with 239 people aboard soon after taking off from Kuala Lumpur for Beijing on March 8. Its whereabouts and what happened remain one of the biggest mysteries in commercial aviation. Another Malaysia Airlines flight, also a Boeing 777, was shot down over rebel-controlled eastern Ukraine while on a flight from Amsterdam to Kuala Lumpur on July 17. All 298 people on board were killed. AirAsia is also based in Malaysia, but Flight 8501 was operated by AirAsia Indonesia, a subsidiary that is 49 percent owned by the Malaysian parent company. So technically it is an Indonesian airline, but the AirAsia brand is closely tied to the people of Malaysia.

Q: Is there a connection between all these crashes?

A: No. It's just a very unfortunate year for Southeast Asia. But that doesn't stop conspiracy theories from sprouting. New ideas about what happened to Flight 370 - both logical and bizarre - keep appearing. The unsolved nature of that disappearance is only going to generate more attention for Flight 8501 and create a new batch of hypotheses.

Q: How far could the jet have flown?

A: Looking at the flight's paperwork, the plane had more than 18,000 pounds of jet fuel at takeoff, enough to fly about 3 1/2 hours, according to Phil Derner Jr., the founder of aviation enthusiast website NYCAviation.com and a flight dispatcher for a U.S. airline. He notes that's less fuel than most flights tend to carry from New York to Florida.

A: Indonesia, Singapore and Malaysia are conducting a search-and-rescue operation near Belitung island in the Java Sea, the plane's last known whereabouts. Assuming the jet didn't dramatically veer off course, they should find wreckage, which can provide vital clues about what happened.

Investigators will also try to recover the flight data and cockpit voice recorders, which often have the most detailed information about the plane's final moments. Those so-called black boxes - which are actually orange - have homing beacons that help searchers find them.

Sources told CBS News correspondent Jeff Pegues that the search likely won't drag out and the chances of finding black boxes are much better than other missing jet searches because the ocean is shallower and the area much more heavily trafficked.

A: The plane is a workhorse of modern aviation. Similar to the Boeing 737, the single-aisle, twin-engine jet is used to connect cities anywhere from one to five hours apart. There are 3,606 A320s in operation worldwide, according to Airbus. The company also manufactures nearly identical versions of the plane - the smaller A318 and A319 and the stretched A321. An additional 2,486 of those jets are also flying. The A320 family of jets has a very good safety record, with just 0.14 fatal accidents per million takeoffs, according to the Boeing safety study.

Q: What about AirAsia?

A: Low-cost AirAsia has a strong presence in most of Southeast Asia and recently expanded into India. Most of its flights are just a few hours long, connecting one city to another. It has tried to expand into long-distance flying through its sister airline AirAsia X. None of its subsidiaries has lost a plane before, and it has a generally good safety track record. However, it does fly in a part of the world where air travel has expanded faster than the number of qualified pilots, mechanics and air traffic controllers.

Air Asia group CEO Tony Fernandes flew to Surabaya and said at a press conference that that the focus should be on the search and the families.

"We have no idea at the moment what went wrong," said Fernandes, a Malaysian businessman who founded the regional low-cost carrier in 2001. "Let's not speculate at the moment."

Q: What about flying in Indonesia?

A: The country has had a bumpy safety record. In 2007, the crash rate and safety standards were so bad that the European Union prohibited all of Indonesia's airlines from flying into any of its member countries. Than ban was lifted Aug. 17, 2009; however, Indonesia's main airline - quickly growing Lion Air - is still banned by the EU.

Q: How vital is air travel to the region?

A: For many people, it's the only option. Indonesia is a sprawling archipelago nation of 250 million people. To get from one island to another, the easiest way is to fly. As the economy has taken off in the region, so have the number of people flying. The International Air Transport Association recently named Indonesia as one of the five fastest growing air travel markets in the world, predicting an additional 183 million passengers would take to the sky in the next two decades.

Furthermore, routes to, from and within the Asia-Pacific region are predicted by the industry trade group to see an extra 1.8 billion annual passengers by 2034, for an overall market size of 2.9 billion. Within two decades, the region is projected to account for 42 percent of global passenger traffic.

The increase in regional airline traffic reflects rapid economic growth. The International Monetary Fund expects the Southeast Asian economies of Indonesia, Malaysia, Philippines, Thailand and Vietnam to collectively expand 4.7 percent in 2014 and 5.4 percent next year - a growth rate behind only China, India and sub-Saharan Africa.

"It is the only region in the world with as many aircraft on order as in service," Brendan Sobie, analyst at the CAPA Centre for Aviation, a consultancy in Sydney, said by email. "So the growth seems set to continue."