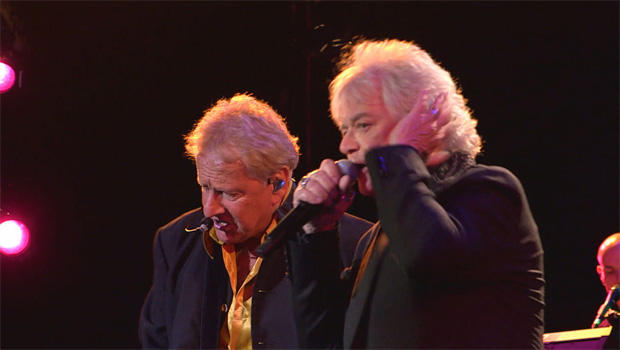 In the 1980s, Cupid had some serious competition. Like an arrow through the heart, Air Supply hit its target with love songs, nothing but love songs.

The formula worked for the Australian duo back then, and it still does today. Correspondent Nancy Giles caught up with the band at a sold-out show in Tarrytown, New York. She asked, "What does it mean for you after 45 years to know how much your music affects people?"

"Well, for me, it's still overwhelming when, I mean, we even get to do this. It just is!" said Russell Hitchcock. "To sing a song in concert and look at somebody and see their reaction, tears or joy or kissin' each other."

Singer Russell Hitchcock and Graham Russell (who plays the guitar) have been perfecting their pop ballad blend for decades. A big part of their success is a mutual appreciation. Legend has it that, in all these years, the two never had a falling out.

"I find that hard to believe," Giles said.

"Well, I mean, we just haven't," Graham replied. "Within the band, we have two separate roles. I'm not a lead singer and I've always known that; I just want to write songs. So, it's a perfect relationship. I've tried to get Russell to write songs but he says, 'No, I can't write songs.'"

"'Cause I can't write songs!" Hitchcock laughed. "Either you can, or you can't."

What Hitchcock can do is sing.

Even at 70 (Hitchcock is a year older than Graham), he still hits those high notes, the same notes that helped sell tens of millions of albums, with eight singles reaching the Billboard Top 10.

Giles asked, "Is it possible to write a song without the word 'love' in it?"

"I'm not saying it's a bad thing; it's a beautiful thing. I'm just curious."

"I do write a lotta songs without love in there, strangely enough," Graham said. "But sometimes it creeps back in."

The guys are constantly on the road. The days can blur, but there's one date they will never forget: the day they met.

"We met in a production of 'Jesus Christ Superstar' in Australia on May the 12th, 1975," said Hitchcock. "It was only a short time after, maybe a couple of weeks, that we started to work together on some of Graham's original songs. And we thought we sounded pretty good. That was the basis of our relationship, musically and personally."

Graham said, "His voice just knocked me out, and it just cut through everyone like a knife."

"Since you guys met doing 'Jesus Christ Superstar,' I guess it's okay to say that Jesus brought you together," said Giles.

From fate, to Air Supply's faithful followers who have a special place in the band's heart. "We call 'em Air Heads, our fans," Hitchcock laughed. "And they're very appreciative of that because they know it's not a demeaning thing."

Hitchcock was surprised by one fan in particular: "I got a tattoo in a very famous shop on the Sunset Strip many years ago, and came out of the shop, and there were four bikers blocking my path, you know? And I thought, 'I'm gonna die here today.' One of the guys said, 'Are you the guy with Air Supply?' I said, 'Yeah.' And he said, 'Would you mind signing this autograph? My wife and I are big fans of yours!'"

And for those who label Air Supply troubadours of mellow or soft rock, get ready for a surprise. "We're a rock and roll band," Hitchcock said. "I get fed up with people saying it's mushy."

"But there's nothing wrong with being romantic. But it's romantic rock?"

No matter the labels, what matters is Air Supply has been making people happy for 45 years … and judging by the crowd here, there's nothing wrong with that.

"Everybody's saying our music's really romantic," said Graham. "But it wasn't by design. I think it was just a reflection of who we were, and who we are."

"Well, it is like the soundtrack of so many people's lives – weddings, intimate moments. You've probably created a little population explosion, let's be honest," said Giles.

"It's been alleged," Hitchcock smiled.

"It's more than alleged!" laughed Graham.

You can stream the Air Supply album "The Lost in Love Experience" by clicking on the embed below (Free Spotify registration required to hear the tracks in full):