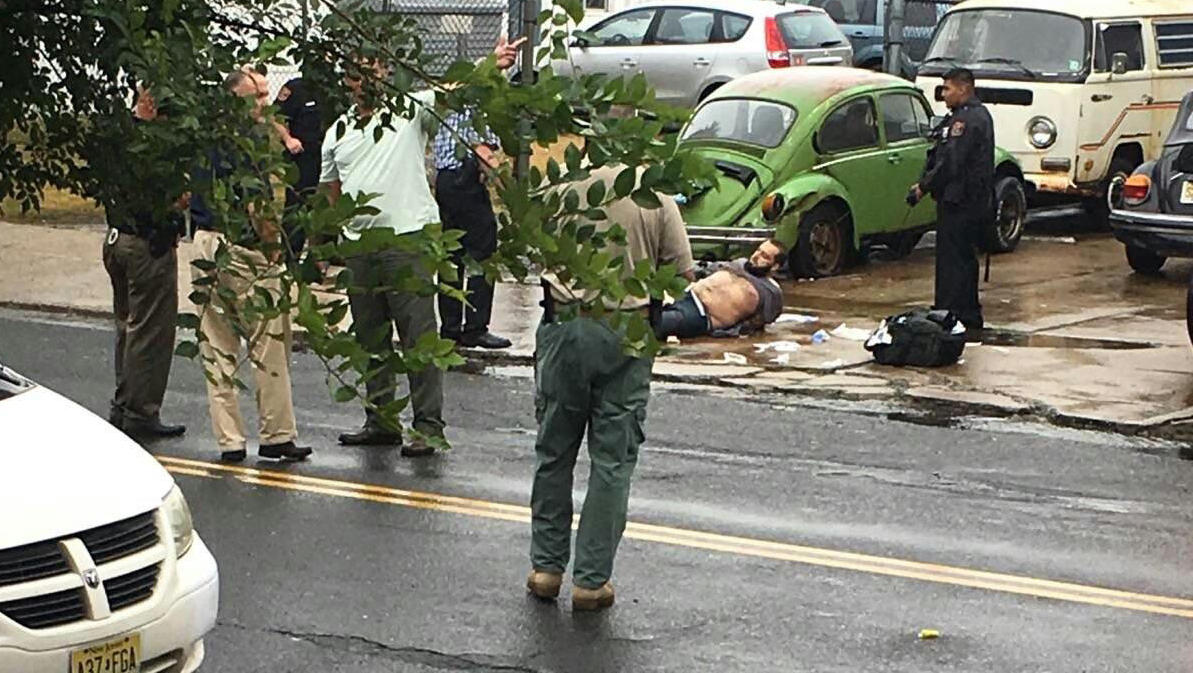 Rahami, 28, appeared conscious, his upper right arm bandaged and bloodied, as he was loaded into an ambulance in Linden. New York City Mayor Bill de Blasio said Monday investigators are not looking for any other individual in connection to the explosions.

The assistant director of the FBI’s field office in New York, William Sweeney Jr., said in a news briefing that “there is no indication that there’s a cell” in the area, despite earlier concerns.

Linden Mayor Derek Armstead said the Afgan immigrant was captured after the owner of a bar reported someone asleep in the doorway of his establishment.

CBS New York reports that when Linden police approached the man, the man raised his head and that’s when one of the officers recognized him as Rahami, Capt. James Sarnicki said.

“The suspect pulled out a gun and fired at the officer and striking him in the abdomen,” Sarnicki said, adding the officer was shot in his bulletproof vest.

Officials say two officers were eventually shot, although neither suffered serious injuries. Rahami was also shot multiple times by officers and was taken to a hospital.

A massive manhunt was launched and millions of New York City-area residents were alerted directly earlier Monday after police identified Rahami as a suspect in connection with the Chelsea bombing that injured 29 people.

Cellphone users across the tri-state area were alerted to the 28-year-old suspect’s name and description around 8 a.m. on Monday with a system normally reserved for flash flood warnings and Amber alerts.

The arrest came just hours after police issued a bulletin and photo of Rahami, a naturalized U.S. citizen from Afghanistan who lived with family in an apartment in Elizabeth, New Jersey, over a fried-chicken restaurant owned by his father.

Around the time Rahami was taken into custody, President Barack Obama was in New York on a previously scheduled visit for a meeting of the U.N. General Assembly, and said it was “extremely fortunate” nobody was killed in the bombings.

He called on Americans to show the world “we will never give in to fear.”

“We all have a role to play as citizens to make sure we don’t succumb to that fear. And there’s no better example of that than the people of New York and New Jersey,” the president said. “Folks around here, they don’t get scared.”

Officials say surveillance video places Rahami at the scene of both the bomb that exploded in Chelsea, as well as the one four blocks away that failed to explode and was taken away by police.

CBS News senior investigative producer Pat Milton reports that Rahami was identified at least in part because he left a fingerprint on one of the unexploded devices.

While officials in New York and New Jersey are still investigating Rahami’s motives, New York City Mayor Bill de Blasio said after his capture that “now we have every reason to believe this is an act of terror.”

De Blasio said despite Rahami’s arrest, there will still be a large police presence in New York, especially with the beginning of the United Nations General Assembly this week.

Rahami was also sought in connection with the bombing in Seaside Park, New Jersey, as well as the five explosive devices found in a backpack near a train station in Elizabeth, New Jersey, the suspect’s hometown.

The FBI bulletin (PDF) on Rahami stated he “is a 28-year-old United States citizen of Afghan descent born on January 23, 1988, in Afghanistan. His last known address was in Elizabeth, New Jersey.”

The bulletin warned that he “should be considered armed and dangerous.”

Rahami, a U.S. citizen born in Afghanistan, lived with his family on a busy street a few miles from the Newark airport. Early Monday, FBI agents swarmed the apartment.

U.S. officials tell CBS News that Rahami traveled to Afghanistan at least once recently, although the dates are unclear. Investigators are trying to determine whom he met with while there and follow whatever leads develop. It is not illegal to travel there.

A senior law enforcement official told CBS News senior investigative producer Pat Milton that Rahami traveled to Afghanistan at least three times, the last time believed to be in 2014. The official said It is unclear at this time the purpose for the trips, investigators are seeking to see if the travel was to visit family or for other reasons.

CBS News’ Andy Triay and Milton reported that two law enforcement sources said that Rahami also traveled to Pakistan during at least one of his trips to Afghanistan.

Elizabeth Mayor Christian Bollwage said Rahami’s father, Mohammad Rahami, and two brothers sued the city after it passed an ordinance requiring the First American Fried Chicken restaurant to close early because of complaints from neighbors that it was a late-night nuisance.

In the lawsuit, Mohammad Ruhami and two of his sons claimed that starting in July 2008, Elizabeth police and city officials improperly tried to restrict the their fast-food restaurant’s hours.

The lawsuit was terminated in 2012 after Mohammad Ruhami pleaded guilty to blocking police from enforcing the restriction. The city was fighting the claims.

Ahmad Khan Rahami was not part of the lawsuit.

The family claimed that baseless citations were issued against them, spawned by complaints filed by residents who disliked them and made anti-Muslim comments to them.

Ryan McCann, of Elizabeth, said that he often ate at the restaurant and recently began seeing the younger Rahami working there more.

However, no Tannerite residue was identified in the New Jersey bomb remnants, in which a black powder was detected, said an official who spoke to The Associated Press on condition of anonymity because the official was not authorized to comment on an ongoing investigation.

At least four flip phones were purchased for the bombs in N.J., sources told CBS News. One was bought over a year ago.

Officials haven’t revealed any details about the makeup of the pressure-cooker device, except to say it had wires and a cellphone attached to it. However, sources told CBS News the bombs were also made of balling bearings, and Christmas tree lights. Christmas lights were also used in the bombs made by the San Bernardino shooters. The Christmas tree lights were believed to serve as a fuse in the San Bernardino case, sources previously told CBS News.

In Elizabeth, New Jersey, the last known address for the Rahami, Mayor Bollwage said after five more pipe bombs were discovered near a train station around 8:30 p.m. Sunday evening that he didn’t believe his town had been deliberately targeted. Bollwage said it was possible that someone worried about the authorities was trying to get rid of the package.