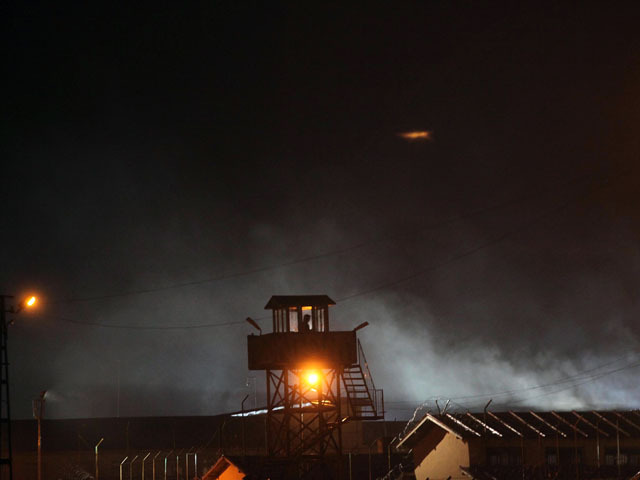 ERCIS, Turkey - Panicked by a strong aftershock, inmates rioted at a prison in eastern Turkey after authorities refused to let them out.

The private Dogan agency said the inmates set bedding on fire at the 1,000-capacity prison in the eastern city of Van on Tuesday evening, after an aftershock caused panic across Van province, which was hit by a killer quake on Sunday.

The U.S. Geological Survey measured the aftershock at a magnitude of 5.7.

The news agency earlier reported that security forces surrounded the prison, aiming to prevent new escapes, since some prisoners had already fled after Sunday's 7.2-magnitude collapsed one prison wall. It said firefighters were working to extinguish the fire inside the prison.

Turkish military vehicles shot water cannon at crowds gathered in the streets of Van to try to calm the situation.

Reuters reported the sounds of several shots to halt the rioting and that there was no more shots in the subsequent hours.

State-run TRT television, meanwhile, says the number of deaths in Sunday's quake has reached at least 459. It says over 1,350 more people have been injured.

Report of the riot comes in the wake of the rescue of 2-week-old baby girl, Azra Karaduman, who was recovered from the rubble of a Turkish apartment building. She was later deemed healthy after being transported to a hospital in Ankara.

And in another rescue, 10-year-old Serhat Gur emerged from the rubble of another building after being trapped for 54 hours. Turkish television reported Gur was taken to an ambulance on a stretcher.

However, more bodies were discovered by thousands of aid workers in Ercis, the worst-hit city, and other communities in eastern Turkey. About 2,000 buildings collapsed.

Also on Tuesday, a foreign ministry official says Turkey will accept foreign assistance to cope with the aftermath of the earthquake, including from Israel.

The official says Turkey decided to accept offers from assistance after emergency management authorities declared the country would need prefabricated homes and containers to house survivors. He spoke on condition of anonymity in line with ministry rules.

Israel offered assistance despite a rift between the two countries over last year's Israeli raid on a Gaza-bound flotilla that killed nine activists.

Aware of the widespread misery, President Abdullah Gul canceled a reception to mark the 88th anniversary of the founding of the republic on Saturday.

As earlier reported, there was still no power or running water. Emergency housing was only available to half of the thousands who needed it.