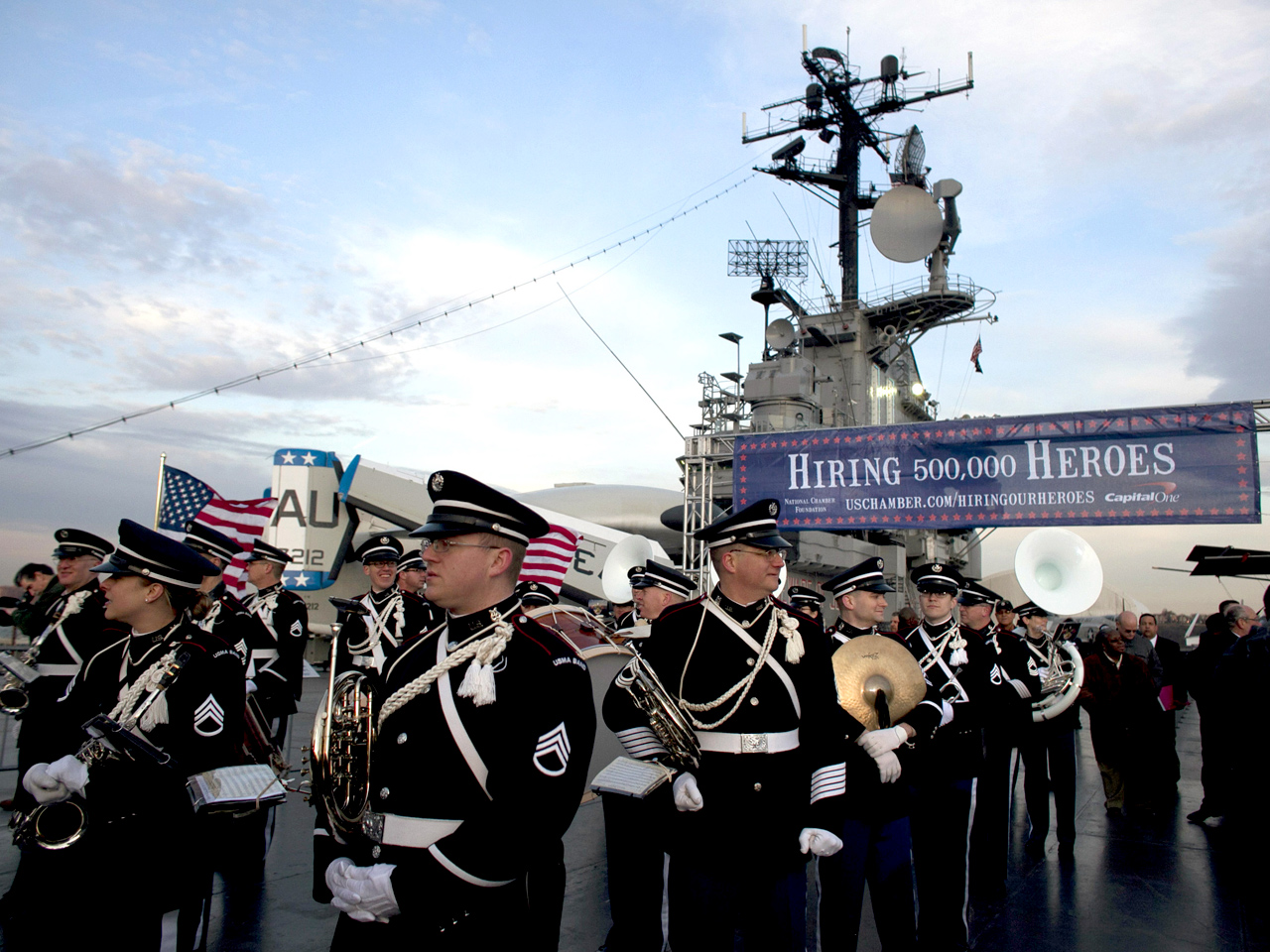 (CBS News) In 2006, following two tours in Iraq working motor transport, former Marine Mike Liguori went through the Department of Labor's Transition Assistance Program for military members and used the modern G.I. Bill to get a business administration degree at Menlo College in northern California, where he still lives.

However, even with the TAP program behind him and his new four-year degree under his arm, Liguori said he was still unprepared. He found no meaningful work. In December of 2010, like too many of his fellow young veterans, he seriously contemplated suicide, only stopping himself as his hand reached for the knife he had chosen for the job.

"I closed the drawer, and I stopped, and I went downstairs in my apartment and I cried. I just cried. It just changed my life forever," Liguori said.

The 28-year-old then began writing, he started helping fellow veterans that were even worse off than him, and, despite consistently being underemployed at best ever since, he decided to take the harsh transition from military to civilian life as a challenge and not an obstacle, operating on the idea that he will find meaningful work before too long.

"You have to start over again. We have a saying in the Marines: Adapt and overcome. That's kinda how life is," Liguori said.

Liguori is a little older than the veteran age group with the worst unemployment rate, but his problems typify their struggles: There is work to be had, but it is not enough; He is qualified for a wide variety of work, but he can't seem to connect with it; He has mental war wounds that could concern a civilian employer, but he also works harder than many people do at addressing them.

Despite the obvious difficulty young veterans have at finding post-service work, veterans overall have experienced a lower rate of unemployment year-to-year than non-veterans since World War II, a trend that continues even through modern harsh economic times and the wars in Iraq and Afghanistan, according to Bureau of Labor statistics.

Hidden within those numbers, however, is countless young veterans like Liguori, and they are often the focus of a loud rallying cry from politicians and veterans advocates to do more for veterans seeking jobs.

"People build careers on the idea that veterans are having trouble getting work," said Ted Daywalt, a Vietnam veteran and president of vetjobs.com, which bills itself as the largest site for veteran jobs. "I have a concern about people misreading the numbers."

Daywalt argues that the real problem is in the National Guard and military reserves, people who have been relied upon in the last five years at a rate like never before to serve for up to a year overseas and find work on their own while home. Naturally, employers are wary of hiring someone who could be forced to take a year-long leave, while they're forced to hold open the job in a tight economy. While it is illegal to fire or discriminate against someone based on their military commitments, there are ways around the restrictions. Harsh economic times have forced employers everywhere to downsize, and anecdotal evidence from within the veteran community indicates many use that as an excuse to excise Guardsmen and reservists from their ranks.

A breakdown of the statistics shows that there also is reason for concern about young veterans. The White House and others have estimated that as much as one million military members will enter the civilian workforce in the next 5 years as the wars in Iraq and Afghanistan wind down. Already, Gulf War II-era veterans currently have a slightly higher overall unemployment rate than everyone else: 8.9 percent.

Younger veterans aged 20 to 24 are also singled out as having particular problems finding jobs. In 2010, they had a 20.6 percent unemployment rate, compared to 12.3 percent for the general population. While the sample size of young veterans in most official surveys is so small that the percentages can swing several points in both directions month-to-month, it is clear younger veterans have a particularly hard time with employment.

Spc. Jesse Espaillat, 20, who is still on active duty with the New Jersey National Guard, said Guardsmen, reservists and veterans his age have an easy time finding $8 per hour jobs at places like McDonalds or Best Buy. However, those jobs barely cover basic expenses and are hard to hold down while serving their country and going back to school, which most his age do on the new G.I. Bill.

While veterans often enter the civilian workforce underprepared, there are a plethora of programs to help them make the transition -- so many, in fact, that it would take weeks of research and several pages just to find and list them all. The Department of Defense, the Department of Labor and the Veterans Administration all offer transition and employment programs to veterans of all age groups, like the TAP program that Mike Liguori went through. That said, of the dozen or so veterans and advocates interviewed for this article, every one of them derided what the government offers in transition assistance as being either inept or inadequate.

There are also numerous service, advocacy and community organizations like the VFW and the Iraq and Afghanistan Veterans of America (IAVA) offering veterans help finding work.

Eugenio Oliva, a 35-year-old former Marine who discharged in 2008, found work at the New York Stock Exchange through IAVA contacts despite having no previous experience in the financial sector. Oliva said many of the soldiers he served with are still trying find jobs as cops or construction workers.

Oliva said he was tipped off to an eight-week mentoring program open to 15 veterans at the NYSE by people at the IAVA, with whom he had been in contact for some time.

"They opened the door for us," Oliva said.

NYSE spokesman Richard Adamonis said NYSE Board Deputy Chairman Marsh Carter, himself a military veteran, had pushed to initiate the mentoring program because he personally experienced the difficulties and challenges of finding employment in the private sector.

Programs like the one at the NYSE are still too infrequent for most, though, in no small part because of how relatively few executives like Carter there are now versus years past.

"This is the first generation of business leaders who have largely not served in the military," said Tom Tarantino, chief policy officer at IAVA and an Army veteran.

Tarantino said that some cultural connection to military service makes a difference.

"People want to hire veterans (and) while they want to hire them, they don't have anything legitimate to quantify what their skills are," said Tarantino, who himself was unemployed for ten months when he first got out of the service, which included a tour in Iraq that ended in 2006. "We all kind of have this loose idea, but veterans have an unrealistic expectation of what we're going to find in the civilian world."

The disorienting return to the civilian workforce can be put off for a time by contracting overseas. The Pentagon has increasingly relied on private companies to do a lot of their work abroad as its own resources are stretched thin, and those companies often look to the experienced, recently returned veteran workforce to do those jobs. Of the nearly 137,000 private contractors working for the Pentagon in Iraq and Afghanistan in July, more than 40,000 were Americans, according to Department of Defense statistics.

Bill McNeely was an Army logistics officer in Iraq who developed numerous administrative and leadership skills while serving. He left the active Army in 2005 and served a while in the reserves. He spent four years as a defense contractor overseas doing everything from poppy eradication in Afghanistan to logistics coordination. Then in December of last year, with the drawdown in Iraq, McNeely decided he had been away from his wife and young son long enough, and that he had enough money in the bank to spend six months just looking for work. He hasn't found meaningful employment since.

"In last nine months, I had one short-term consulting project, and I tried selling cars for seven weeks," said McNeely, who estimates that he has applied to dozens of jobs without any success.

As McNeely's experience shows, veterans have a relatively easy time finding work abroad for great pay, and not all the contracting work available to veterans abroad is dangerous. However, more often than not, home is here, and here the jobs situation is hard for everyone.

"It's frustrating because I feel like I'm doing all the right things but I'm not getting any results," said McNeely, adding that his situation has forced him to move his family in with his in-laws in Fort Worth, Texas.

Veterans like McNeely know there is help out there, but struggle to connect to it.

"There's all these people who want to do the right thing, and it's all going in crazy directions," McNeely said.

Depending on whom you ask, the problem with veterans and joblessness is either large or confined to a few specific groups, but almost everyone involved in the issue agrees there is no magic bullet.

"The biggest thing I'm hearing from both sides is, a job is great. (However) bigger than that, I think, is getting at the problem that's rising before the employment, which is networking, resume building, cover letter writing, proofreading -- networking in a way that is similar to the way the veteran is treated in the military," said former Marine Roman Baca, who currently advises several recently returned veterans at a time for The Mission Continues, a service organization based in St. Louis.

Baca said that while people are in the military, networking, discipline, and generally doing things the right way are all woven into the culture. Building a similar structure outside of the military with equal contributions from the public, private and government sectors may be the best way to help.

"When they get out and they're trying to find a job, they're alone," Baca said. "They're thrust into this workplace alone. They don't have this person to say, 'You're not doing that right. You need to do this.' Finding a way to mirror that small unit leadership for veterans is essential."