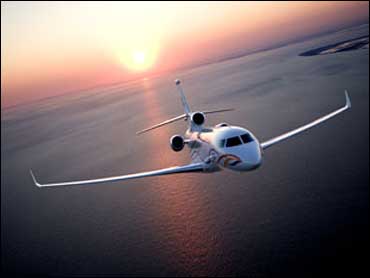 The financial crisis hasn't necessarily put an end to lavish corporate spending or stopped its leaders from living the good life.

Citigroup has received so much bailout money to date that the American taxpayer is now its major stockholder. So when it was reported Monday that the company is having a new, $50 million luxury corporate jet delivered, some people just couldn't believe it:

"I was outraged," said one citizen-stockholder. "$50 million, they have leather seats in this airplane, and I don't think they care. I think they're spoiled babies."

"Why can't they fly commercial?" asked another.

Citigroup's purchase follows a report that former Lehman Brothers CEO Richard Fuld deeded his $14 million oceanfront home in Florida to his wife for just $100 - the minimum amount needed for a property transfer.

CBS News correspondent Michelle Gielan reports that Citigroup - which has so far received $45 billion in bailout money - said the contract for the French-made Dassault Falcon 7X was signed in 2005. In a statement, Citigroup said that "refusing delivery now would result in millions of dollars in penalties."

Citigroup said it is in the process of selling off some of its older planes and that the new jet will save money because it's more fuel-efficient.

But some say, for the struggling bank to buy a luxury jet at this time is unthinkable.

"Citigroup is sending the wrong message to the public," securities attorney Jacob Zamansky told CBS' The Early Show. "They're going out and taking delivery of a $50 million plane while people are losing their jobs and their homes.

Steve Forbes, editor-in-chief of Forbes magazine, agreed, and told Early Show anchor Harry Smith that while such flagrant spending might appear sensible on the books, it could potentially kill the bailout package the same banks need from Congress and the American public in order to survive.

"On the corporate jet, yes, they may have taken some penalties [if they killed the deal], but you take a couple million versus the $40 billion or $50 billion to keep this thing alive - that's not much of a tradeoff," he said. "Put it on sale.

"Yes, maybe [it's] a little more inefficient, but you've got to keep this thing alive and have the trust of the public. This is not the way you entrust in an environment like this," said Forbes.

The bank claims that TARP money (the congressionally-authorized funds distributed to help shore up struggling financial firms) won't be used to buy the plane, but some say the extravagant purchase is arrogant and demonstrates a business-as-usual attitude.

"The world has changed in the last two years, and Wall Street and corporate America don't get it," said Zamansky. "They haven't changed their habits, and they need to."

Some aspects of life at the top of Citigroup have changed, though: Last week, the firm's three top executives passed up bonuses, which for them last year totaled $64 million (even though Chief Executive Vikram Pandit had only started at Citigroup in July 2007, and Chairman Win Bischoff in December 2007).

Last October, when former Lehman Brothers Chairman and CEO Richard Fuld faced the House Oversight and Government Reform Committee, its chairman Henry Waxman, D-Calif., asked, "Is that fair for the CEO of a company that is now bankrupt to have made that kind of money?"

It wasn't a rhetorical question: Waxman asserted that Fuld had earned, in salary and stocks, approximately $480 million over the past eight years, while the 158-year-old firm fell to pieces. Fuld disputed the figure, saying he'd only been paid $60 million plus $250 million in stocks.

"You have a $14 million oceanfront home in Florida," Waxman reminded him.

Fuld's accumulation of wealth while Lehman stockholders lost theirs made him a target for angry taxpayers.

CBS News correspondent Kelly Cobiella reports that last November - the same month Fuld was named in a $150 million lawsuit brought by San Mateo County for losing its investments - Fuld transferred his $14 million oceanfront home in Jupiter Island, Fla., to his wife Kathleen, for just $100 - the minimum amount needed for a property transfer.

The two had owned the home jointly since paying $13.7 million for it in 2004, according to property records.

The routine transaction - common for estate planning purposes - could be seen as anything but.

"The question that it's going to come down to is whether he's ultimately held liable to the folks in California, and I just believe that's going to be a stretch," said corporate attorney Gardner Davis.

Under normal circumstances, executives of a corporation can't be held
personally liable for a business decision. But San Mateo County Supervisor Mark Church is confident the judge in his case will find criminal negligence.

"Mr. Fuld can be held personally liable for his actions," he told CBS News. "He has falsely represented that his company was financially strong when it was not."

Now that pain is being felt by San Mateo County residents as services like after-school programs are cut, all the while Fuld continues to hold onto his $100 luxury home.

Miami bankruptcy attorney Timothy Kingcade said under Florida law the deed transfer may still not protect the mansion from being seized if there is a civil judgment against him within four years of the asset transfer.

"How may that play out? Maybe he has good lawyers and they can delay any judgment being entered against him," Kingcade said. "But it is suspicious. People don't transfer their assets out of their name for no good reason."

Kingcade also noted that under Florida law, jointly-owned property is protected from seizure by those seeking to collect a debt, meaning if there was judgment against Fuld, and the home was owned by Fuld and his wife, it could not be taken.