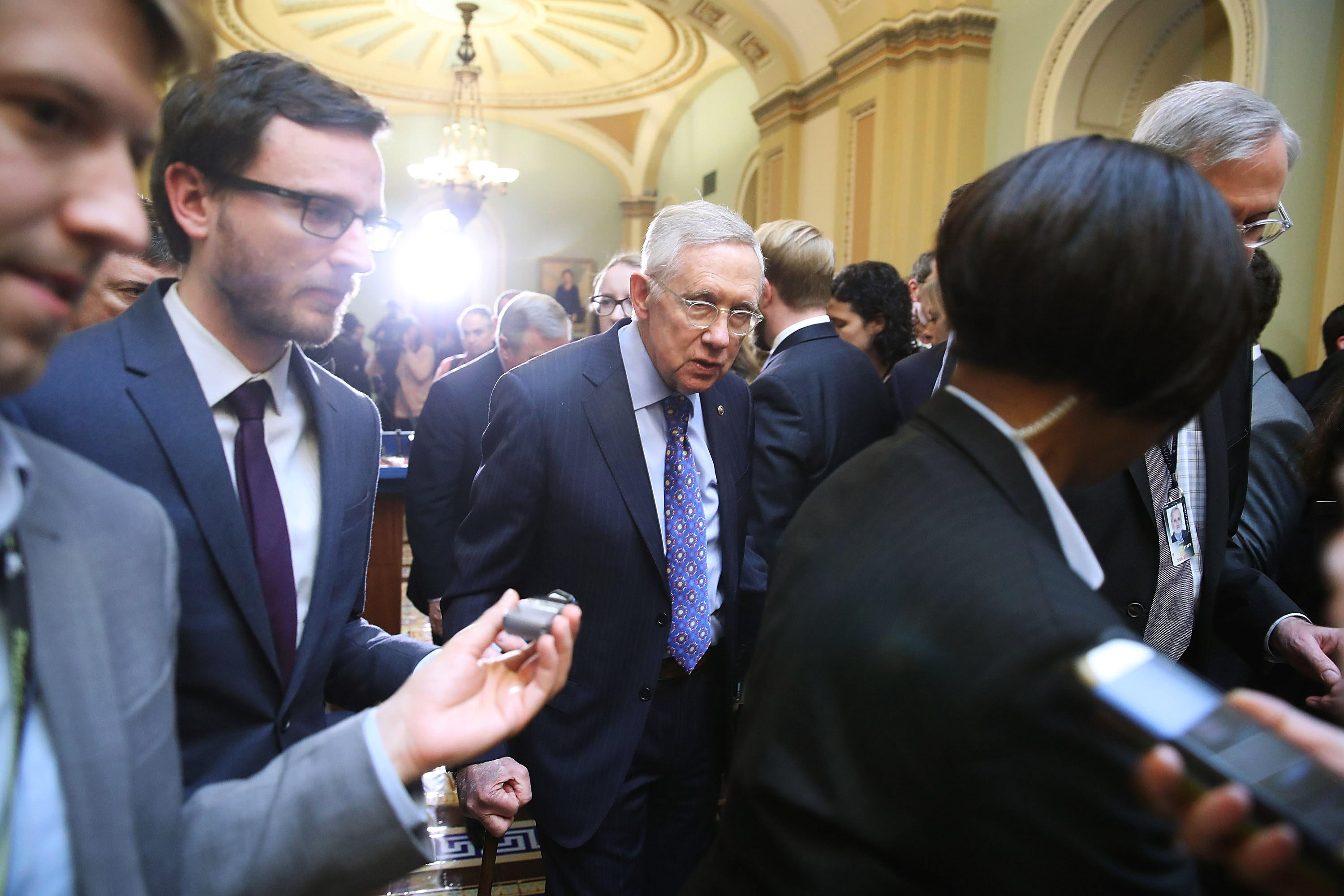 Senate Minority Leader Harry Reid of Nevada bid a final farewell Thursday to his colleagues, following a 34-year career in Congress, the first four in the House, and 30 years in the upper chamber, where his leadership saw -- among other legislative accomplishments -- the passage of sweeping healthcare reform.

Reid, who has been the Democratic leader for over a decade, is retiring at the age of 77, just as Republicans have taken control of the White House and continued their hold on the legislative branch.

In his lengthy address on the Senate floor, Reid gave a nod to his own childhood and the Affordable Care Act, a crowning achievement that’s been threatened by President-elect Donald Trump.

“I can remember my father having such a bad toothache, I watched him pull a tooth with a pair of scissors -- a pair of pliers,” Reid told senators. “I know how important health care would have been for him.”

“I think everyone can understand a little bit of why I have been such an avid supporter of Obamacare, health care,” he said.

Hillary Clinton was also their to pay homage to Reid -- she joked, “This is not exactly the speech I thought I would be giving at the Capitol. But after a few weeks of taking selfies in the woods, I thought I would come out.”

Clinton praised him, saying, “No matter how high he rose here in Washington, he never lost touch with the people and values he grew up with back in Searchlight.”

Despite hurling criticisms at the president-elect over the course of his campaign, Reid never mentioned Mr. Trump by name on the Senate floor.

In an interview with NPR Thursday, however, Reid attempted to be optimistic about the incoming administration, saying the president-elect was “not as bad as I thought he would be.”

“I‘m hopeful — I keep using that word, but that’s what it is — hopeful that he will lessen his rhetoric and work toward a safer, more productive America,” he said.

Reid, the son of a miner, also reflected on his hardscrabble upbringing in Searchlight, Nevada, which he noted on the Senate floor was a town that had 13 brothels and little else.

“I was kind of embarrassed about it. It was kind of a crummy place. I didn’t show people pictures of my home,” he said.

The former boxer often brought a little pugilism to his legislating style, but now, looking to the future of his party in the Senate, Reid counseled his colleagues to pull their punches a little in their use of the filibuster.

“Otherwise,” he cautioned, “it will be gone.”

Of Chuck Schumer, the Democratic New Yorker set to succeed him, Reid said: “He won’t be me, but he’ll do a good job.”

Senate Majority Leader Mitch McConnell, a Republican from Kentucky, spoke highly of his longtime colleague in his own tribute to Reid on the Senate floor.

“It’s clear that Harry and I have two very different world views, two different ways of doing things, and two different sets of legislative priorities,” McConnell said. “But through the years, we’ve come to understand some things about one another, and we’ve endeavored to keep our disagreements professional, rather than personal.”

Reid gave a hat tip to McConnell in his farewell address.

“We are advocates for a cause. I do the very best I can, he does the best he can,” he said. “I want everyone to know here - Mitch McConnell is my friend.”

Ultimately, Reid says he was grateful for the chance to have an impact the Senate and make some difference for his home state -- an opportunity he says came through his own hard work.

“The little boy from Searchlight has been able to be part of changing the state of Nevada,” he added.