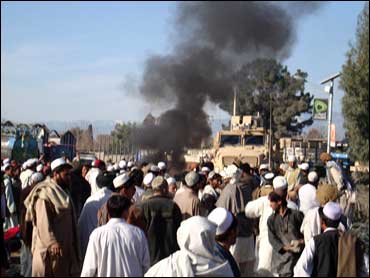 Sabari said the four killed were civilians, but the U.S. said they were militants.

Demonstrators in Khost city threw rocks at the convoy, shouted "Death to America" and burned tires in the road, sending up dark plumes of smoke. AP Television News footage showed several hundred men gathered in the street blocking the vehicles' path, but there were no clashes.

The U.S. military said both Afghan and coalition forces raided an Afghan home, and that militants fired at them. The forces killed what the U.S. said were four men linked to the militant network of warlord Siraj Haqqani. One militant was wounded and four were detained, the military said in a statement.

It said 14 women and 26 children were "protected" during the raid, but did not give further details.

The forces found weapons, explosives and materials to make bombs, the statement said.

Sabari countered that no Afghan forces took part in the raid, despite a recent agreement between U.S. forces and the Ministry of Defense saying Afghans would be included in such operations to prevent civilian casualties and help with cultural issues and language difficulties when entering Afghan homes.

Afghan President Hamid Karzai has complained loudly during the last several months about civilian deaths, and has pleaded with the U.S. and NATO to prevent such killings. He made no comment Saturday on the raid in Khost.

In the south, a suicide attack near the main gate of a police station in the Zarang district of Nimroz province killed a civilian and a policeman, said Gov. Ghulam Dastagir.

Taliban militants have stepped up attacks in recent years and now control wide areas of the south. The U.S. is sending 17,000 more forces to Afghanistan this year to bolster the record 38,000 already in the country.

Karzai Offers To Rule Months Beyond His Term

President Karzai said Saturday that he accepted the election commission's decision to hold a presidential vote on Aug. 20, three months after his term officially ends, and suggested he should remain in power until the election takes place.

According to the Afghan Constitution, Karzai's last day as president should be May 21 and a presidential election "shall be held within 30 to 60 days prior to the end of the presidential term."

But the election commission has said the vote will be held in August - three months later - because of security issues, spring snow cover in the high Afghan mountains, and a lack of money for the ballot distribution.

The president said he was consulting with legal authorities about a possible extension to his term because the vote had been pushed back and that he would soon announce the results of those conversations.

Opposition leaders have already said they would not agree to an extension of his term.

Karzai said the country needed to reach a "national consensus" on the matter.

He said the rule of law and legitimacy of the state were the most important factors.

"I've already promised that I want to be a legitimate president. If it is illegal for me to stay after May 21, I don't want to stay," he said.

Karzai noted that the United Nations and the United States had approached him about extending his term for 12 months to save money by holding presidential and legislative elections in the same year. But Karzai rejected that idea, saying he could not stay in office longer than five years. Legislative elections are slated for 2010.

The lower house of parliament, which is filled with lawmakers who want Karzai's job, passed a resolution earlier this year saying they would not recognize him as president after May 21, setting up a potential constitutional crisis.

Some lawmakers have suggested the speaker of the upper house should become a caretaker president, but Karzai said Saturday the constitution makes no provision for that.

He also noted that many other lawmakers wanted the presidential poll to be held in August because they did not have enough time to prepare for a spring election.