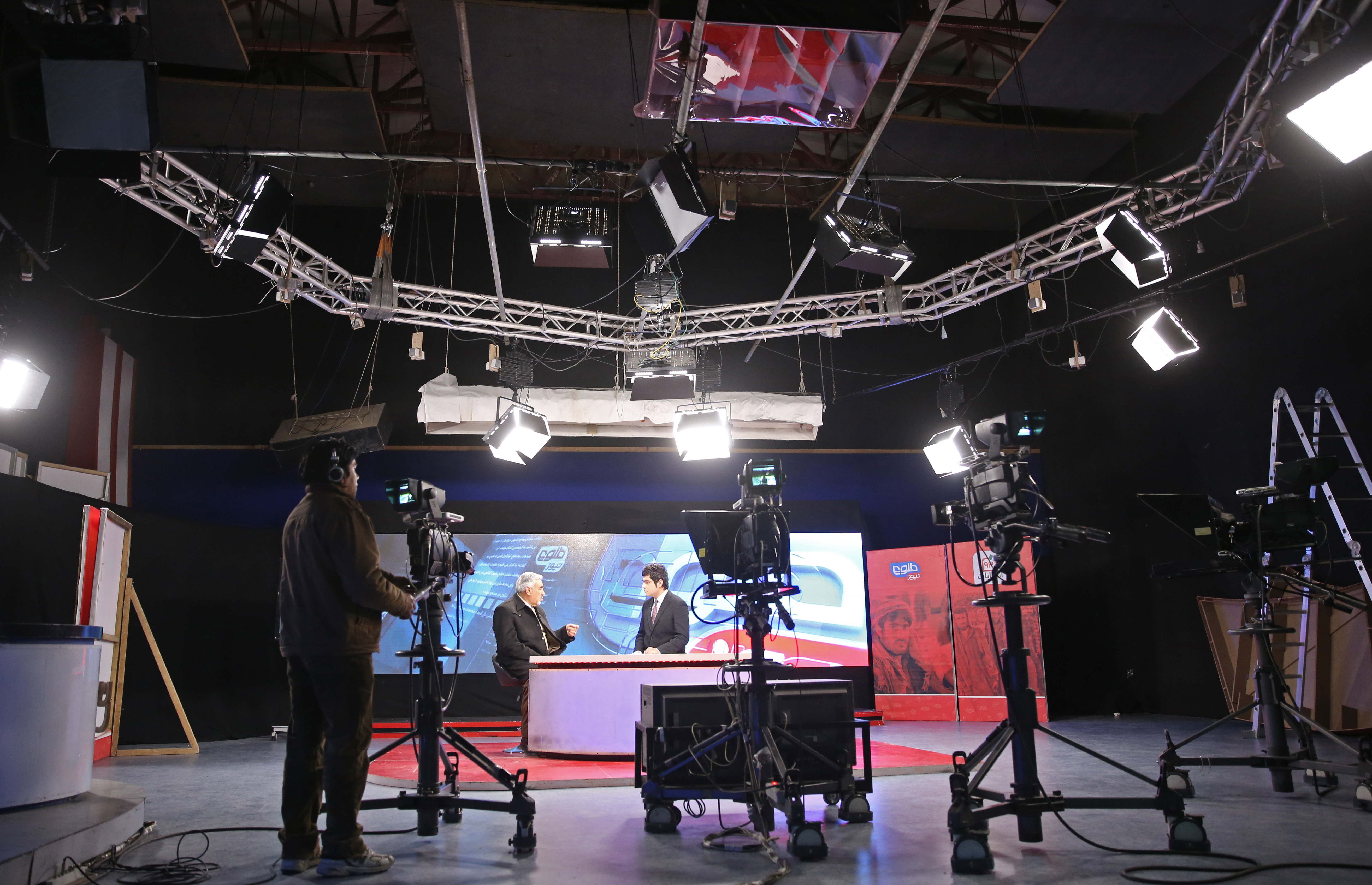 The 13 men and three women just keep on talking about soundboards, cameras and the taking of questions via Twitter until the station's generator kicks in and the overhead lights flicker back on.

"It's just technical difficulties," explains Mujahid Kakar, the Tolo anchor and moderator of the upcoming debate among six of the main contenders vying to succeed President Hamid Karzai in the April 5 election.

The moment is a reminder of the difficulties of reporting in an impoverished country torn by war. Yet, in many ways, Afghan media coverage of the crucial campaign that kicked off this week resembles what you'd see in any other modern democracy, with newspaper candidate profiles and political talk shows on numerous TV and radio stations.

And this week, for the first time, major contenders for the presidency will introduce themselves to the nation in a televised debate.

The proliferation of Afghan media in the past 12 years is one of the most visible bright spots of the fraught project to foster a stable democracy, even as the NATO military mission in Afghanistan nears its end with the country still riven by war with Taliban insurgents and mired in corruption and poverty.

Given that the Taliban banned television as sinful and allowed only one religious radio station before they were driven from power in 2001, the sheer number of media outlets - dozens of TV channels, more than 100 radio stations and hundreds of newspapers - is stunning. That they are mostly free to set their own agenda is even more so.

"It goes against some of that common wisdom that it's all doomed," says Nader Nadery, chairman of the Free and Fair Election Foundation, an Afghan pro-democracy group.

Where the Taliban banned sports, Afghans can now watch soccer matches on television. Where music aside from religious hymns was forbidden, there are "American Idol"-style singing competitions. Women were once erased from public life; now some host television shows.

What's less clear is what the future holds for all these media outlets after this year, when most foreign troops will go home and much of the billions in aid dollars is expected to be reduced.

For now, though, Afghan news outlets are enjoying a moment in the sun. Newspapers in Dari and Pashto, the country's main languages, are full of campaign coverage. Radio and TV stations from all over the spectrum - private for-profit ventures, aid-supported democracy boosters and stations supported by political parties or religious groups - compete to offer their views of the race.

Tolo TV, Afghanistan's most popular channel, is touting the debate as the first in the country to pit all the major presidential candidates against one another. State television hosted a debate between Karzai and two challengers during the last election, in 2009, but it excluded Karzai's main challenger Abdullah Abdullah, who is running again this year. Tolo TV held its own debate in 2009, but Karzai declined to attend.

"It's a historic debate for the country and for the people," says Kakar, 42, a former refugee who studied journalism in Pakistan and returned home after the U.S.-led military intervention. "This is a process of democracy. We prove to the people that these candidates, they have the responsibility toward the people."

It may be a first but probably won't be the last. With Karzai ineligible to serve another term and a wide field of candidates looking to distinguish themselves, debates are expected to be a fixture of the two-month campaign period.

With Afghanistan's low literacy levels, radio and television dominate the media landscape, with 63 percent of all Afghans listening to radio regularly and 48 percent watching television, according to research conducted in 2010 for the U.S. Agency for International Development.

Tolo TV - which is part of the privately held Moby Group founded by Afghan-Australian brothers in part with U.S. aid money and is now earning revenue of some $20 million - is by far the most popular channel, with an estimated 10 million viewers tuning in to its mixture of news, sports and light entertainment.

Other television outlets included Ariana and YakTV, which air a mixture of cooking shows, games and Afghan cultural fare. The government is still a major player, with a state television station and more than 30 government-linked radio stations. There are also numerous private stations funded by politicians and religious leaders.

While most of Afghanistan's television fare is tame by Western standards - female reporters wear headscarves, and imported Turkish soap operas are pixelated to mask any show of skin by women -  the flourishing entertainment and news have drawn the ire of many religious conservatives.

Sadaf Amiri, 23, anchor of a political talk show on Tolo, knows that firsthand from the threats and the cold shoulders from some of the more conservative politicians she has interviewed.

"For a woman, working in the media is a threat in itself, whether someone threatens us personally or not," Amiri says. "But I have been threatened."

Whether the relatively free press will remain in Afghanistan is not certain. Even if the election goes smoothly, Afghanistan's religious conservatives still wield tremendous power, and there is no guarantee that future governments will be able to resist pressure to curtail the press.

A greater threat might be financial. Many of the newly minted stations and newspapers are dependent on foreign funding, and the few profitable private outlets, like Tolo, get much of their advertising revenue from businesses that rely on the coalition.

Still, Nadery argues that this year's unprecedented level of campaign coverage illustrates that Afghanistan has changed in fundamental ways in the past 12 years. Taking a more optimistic view than many, he says Afghans have become accustomed to the new, relatively freewheeling media and won't give it up easily. The same may also go for elections.

"Societal transformation here is a direct result of the free media," Nadery says. "The media also changed the way politics have been done in this country."