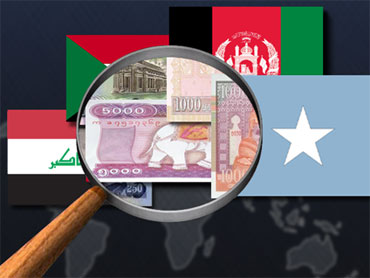 Afghanistan and Iraq, countries that receive billions of dollars a year in international support, are among the world's most corrupt nations, a watchdog group said in a report released Tuesday.

Singapore, Denmark and New Zealand were the most principled countries around the globe, it said.

"The results demonstrate that countries which are perceived as the most corrupt are also those plagued by long-standing conflicts, which have torn their governance infrastructure," the report said.

The ranking measures perceived levels of public sector corruption in 180 countries, and draws on surveys of businesses and experts.

She added that the international community must find ways to help war-torn countries to develop their own institutions.

Afghanistan, which slipped to 179th place from 176th, has been dogged by corruption for years. Under heavy pressure from the U.S. government, following his fraud-tainted re-election.

Karzai's inability or unwillingness to tackle cronyism and bribery during the past five years has given Taliban insurgents another argument with which to win support from the Afghan people. Nations supplying troops and aid are running out of patience with his government.

"Examples of corruption range from public posts for sale and justice for a price, to daily bribing for basic services," the report noted.

The United States, which was in 19th place compared with 18th last year, remained stable despite Transparency's concerns over a lack of government oversight of the financial sector.

"A swift government response to the financial crisis and moves towards regulatory reforms that include transparency and accountability measures may play a role in the country's score," the report said. "Nonetheless, it remains to be seen whether proposed reforms are far-reaching enough and to what extent they will be implemented."

The report also pointed out that the U.S. legislature is another reason for concern, as it is "perceived to be the institution most affected by corruption."

There were some bright spots in the new report - Bangladesh, Belarus, Guatemala, Lithuania, Poland and Syria were among the countries that improved the most.

While corruption in Bangladesh is still widespread, "a caretaker government's nationwide crackdown on corruption during 2007-2008 and the instruction of institutional and legal reforms" have improved the conditions.

In Poland, the establishment of a ministerial office for anti-corruption and an increased number of investigations into corruption have improved the situation.

"No region of the world is immune to the perils of corruption," the watchdog's report said.

Global Corruption, From Least to Worst, 2009

Transparency International's Corruption Perceptions Index (CPI) table shows a country's ranking as to its perceived level of public-sector and political corruption (i.e., the frequency and/or size of bribes) in a country/territory; highest ranking indicates least corruption, with some ranking calculations resulting in ties.