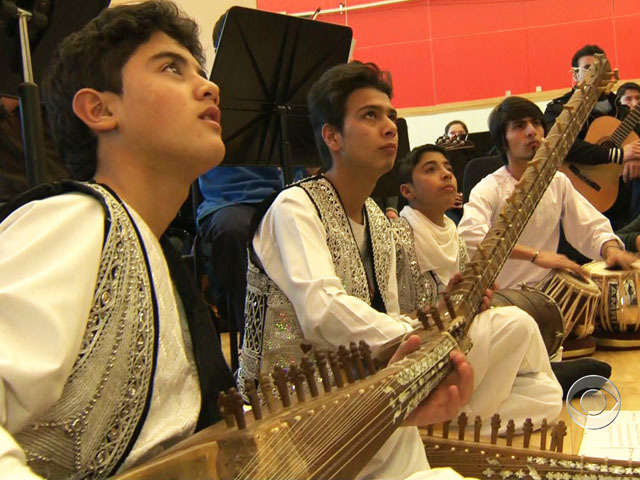 (CBS News) WASHINGTON -- New York's Carnegie Hall has hosted some of the greatest musicians in history. The group performing Tuesday night is perhaps the most unlikely ever to take the main stage. CBS News caught up with them when they performed in Washington.

Milad Yousufi grew up in war-torn Afghanistan, and though he didn't have a piano, he did have an imagination.

"I was drawing piano on the paper, and then I was playing it," Milad says.

There was no access to a piano, because the Taliban, who controlled Afghanistan for five years, banned all non-religious music, saying it was "un-Islamic."

"If they knew that you were listening to the music, probably they would kill you, because they did not like music," Milad says.

Today, the Taliban is out of power, and 18-year-old Milad is making up for lost time. He's joined Afghanistan's first youth orchestra, which, thanks to American funding, is on tour in the U.S.

CBS News met the performers as they practiced with the Maryland Youth Orchestra.

The orchestra is the brain child of Ahmed Sarmast, who fled Afghanistan during Taliban rule. He returned in 2008 with a mission of reviving the arts by opening up a music school.

"It's impossible to keep culture alive where you do not have access to music," Sarmast says. "The power of music is so important for the healing of the people."

His students are between the ages of 10 and 21. Half are orphans or street kids. And in a country where women typically have few opportunities, they make up one-third of the music school.

"We can play your music and you can play our music, and we can speak in a common language of humanity -- and that is the language of music," Sarmast says.

On this night, that language resonated throughout Washington's famed Kennedy Center -- 48 musicians playing Vivaldi and longing for their own season of change, an Afghanistan without war.

Photographer takes free photos of terminally ill pets: "A capture of my love"
Thanks for reading CBS NEWS.
Create your free account or log in
for more features.
View CBS News In
CBS News App Open
Chrome Safari Continue
Be the first to know
Get browser notifications for breaking news, live events, and exclusive reporting.