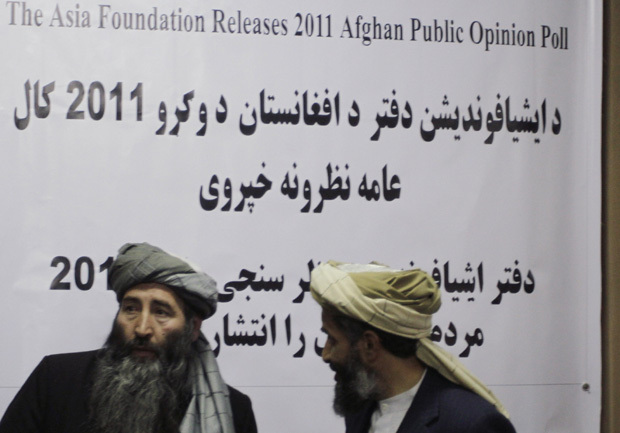 KABUL, Afghanistan - Support for the Taliban among Afghans has steadily declined in recent years and people strongly back a government peace initiative, according to a survey funded in part by the U.S. government.

But the survey released Tuesday by the nonprofit San Francisco-based Asia Foundation also showed a population weary of insecurity and corruption, and distressed by poverty and corruption.

The survey found that an overwhelming majority of Afghan adults, 82 percent, back reconciliation and reintegration efforts with insurgent groups. It said that the number of people who said they sympathized with the aims of Taliban had dropped to 29 percent compared to 40 percent last year and 56 percent in 2009.

Afghan President Hamid Karzai has been making peace overtures to the Taliban for years with the backing of the international community. These efforts however were dealt a major blow by the Sept. 20 assassination of former Afghan President Burhanuddin Rabbani, who was leading the government's U.S.-backed initiative.

The survey was conducted prior to Rabbani's death.

Beyond that, while the survey showed some confidence in Afghanistan's economic development, it also showed dissatisfaction with the state's ability to deliver both security and clean government.

"The biggest problem at the national level is insecurity, followed by unemployment and corruption" said Bruce Tolentino, the foundation's country representative.

A lack of security was identified as the biggest problem in the country by 38 percent of those polled, especially in the south and east where insurgents are fighting Afghan security forces and U.S.-led coalition troops. Of those asked, 71 percent said they feared traveling from one part of Afghanistan to another.

Although roughly half of those polled thought the Afghan police and army were "unprofessional and poorly trained," a growing number of people thought they were steadily improving. There was also a small reduction in the number of people who feel the two security forces can operate without foreign help, although a majority think they can't.

The U.S.-led coalition has spent tens of billions of dollars to try and train more than 300,000 Afghan army and police forces so they can gradually take charge of security as the foreign forces end their combat mission at the end of 2014 and go home or move into support roles.

But a series of spectacular attacks by the Taliban this year — many occurring after the survey was conducted — has raised doubts about the ability of Afghan security forces. They include a September attack against the U.S. Embassy and NATO headquarters that led to a 20-hour standoff in downtown Kabul.

The survey found some indications of optimism, particularly in terms of the country's development.

Nearly half of those asked, or 46 percent, thought the country was moving in the right direction. Reconstruction and rebuilding, good security in some areas and improvements in the education system were the main reasons. But for the first time since the survey began in 2004, a rising number now think that Afghanistan is moving in the wrong direction — an increase to 35 percent from 27 last year.

This confidence, such as it is, appeared however to be linked to development and economic growth that analysts warn may be fragile, and tied to the country's war economy.

The survey found that of those who thought the country was moving in the right direction, 40 percent said reconstruction was the primary reason.

U.S. State Department and USAID assistance will be cut from $4.1 billion in 2010 to $2.5 billion in 2011. The World Bank found that 97 percent of the gross domestic product in Afghanistan is linked to spending by the international military and donors.

In issues related to governance, although the survey said a majority of Afghans were satisfied with the performance of the government, it did not address the issue of whether they were satisfied with the country's leadership or its president. Karzai has been criticized by the Afghan opposition and by the international community for not doing enough to combat corruption, and for ignoring institutions such as the parliament.

In 2011, for the first time, the majority of respondents said corruption was a major problem in all facets of daily life.

"The majority of respondents say that the government is doing a bad job in fighting corruption," the survey report said.

The survey also found that although Afghans expressed increased satisfaction with the government's performance in delivering services, they were not impressed by the country's nascent democratic institutions in general. "Since 2008, there has been a steady rise in those who say they are dissatisfied with the way democracy works in the country," the survey said.

The survey was conducted among 6,348 adults in July in all of Afghanistan's 34 provinces, excluding some dangerous areas. The survey, conducted with financial backing from the U.S. Agency for International Development, has a margin of error of plus or minus 4.1 percentage points.