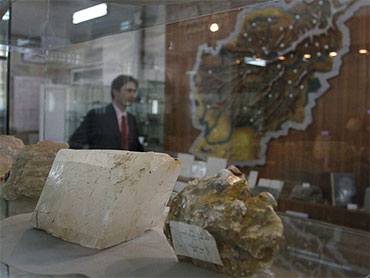 Afghanistan's untapped mineral wealth is worth at least $3 trillion - triple a U.S. estimate, according to the government's top mining official, who is going to Britain next week to attract investors to mine one of the world's largest iron ore deposits in the war-torn nation.

Geologists have known for decades that Afghanistan has vast deposits of iron, copper, cobalt, gold and other prized minerals minerals, but a U.S. Department of Defense briefing this week put a startling, nearly $1 trillion price tag on the reserves. Minister of Mines Wahidullah Shahrani said Thursday that he's seen geological assessments and industry estimates that the minerals are worth at least $3 trillion.

"Afghanistan has huge untapped natural energy and mineral resources which have enormous potential for our economic development," Shahrani said. "Ensuring that this is done in the most transparent and efficient way while delivering the greatest value to the country is a priority of the government."

Critics of the war have questioned why the nation's mineral worth was being promoted at a time when violence is on the upswing and the international coalition is under rising pressure to prove that its counterinsurgency strategy is working.

They argue that if impoverished Afghanistan is seen as having a bright economic future, it could help foreign governments persuade their war-fatigued publics that securing the country is worth the fight and loss of troops. It also could give Afghans hope, U.S. officials say.

But Shahrani insisted that the release followed months of work to assess the mineral deposits with the aid of old geological information obtained by several different nations over more than three decades of conflict.

President Hamid Karzai mentioned the mineral wealth at a May 13 event with U.S. Secretary of State Hillary Rodham Clinton in Washington, but he did not elaborate. The Ministry of Mines held a news conference in the Afghan capital following a story about the Pentagon estimate in The New York Times.

Shahrani said the ministry has been working with international partners to assess Afghanistan's mineral reserves and improve the expertise of Afghan geologists. In addition, Shahrani said mineral and hydrocarbon laws have been updated to meet international standards and efforts are being made to prevent possible corruption in the awarding of contracts.

In November, two U.S. officials familiar with intelligence reports alleged that Afghanistan's former minister of mines, Mohammad Ibrahim Adel, accepted $20 million after a $3 billion contract to mine copper was awarded in late 2007 to China Metallurgical Group Corp. The former minister has denied having taken any bribes and said the contract went through all legal channels.

Aynak, a former al Qaeda stronghold southeast of Kabul, is thought to hold one of the world's largest unexploited copper reserves. Mining the copper could produce 4,000 to 5,000 Afghan jobs in the next five years and hundreds of millions of dollars a year to the government treasury, Shahrani said.

Craig Andrews, a lead mining specialist for the World Bank, said Aynak was expected to start producing copper within two to three years. Production of an estimated 2 million tons of iron ore at Hajigak in central Bamiyan province, a relatively safe area of the country, could begin in five to seven years, and possibly sooner, he said.

Andrews noted that studies show that every mining job creates five to 10 other jobs.

"Clearly, these mines will have a huge economic stimulus effect on not only the national economy, but the region in which they are located in," Andrews said. "I think when people have jobs and they have an income, they have a stake in the future and the future does not include insecurity. I think once the communities are anchored in an economy that gives them jobs money and income they would be less inclined to support the Taliban or other insurgent groups."