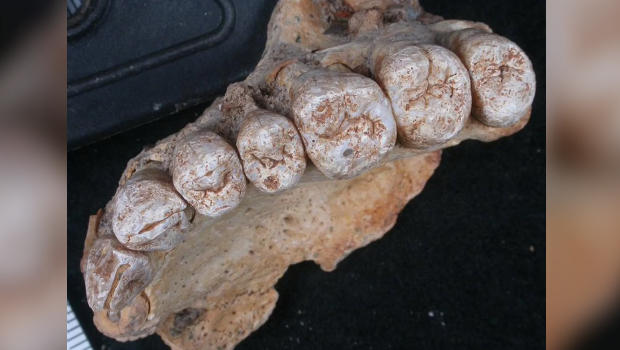 The oldest fossils of modern humans outside Africa have been discovered in Israel, a new study finds. The newly revealed jaw and teeth are estimated to be up to 194,000 years old.

This makes these fossils at least 50,000 years older than modern human fossils previously unearthed outside Africa, and closer in age to when recent genetic results suggested modern humans may have first left Africa.

These new findings suggest that modern humans may have had more time to interact and interbreed with archaic human lineages outside of Africa than previously thought. The discovery also sheds light on the routes modern humans might have taken while dispersing from Africa.

Modern humans originated at least 200,000 years ago in Africa. The oldest known bones of our species, Homo sapiens, may date back about 300,000 years.

Scientists have long debated when and how the modern human lineage spread out of Africa to colonize the rest of the world. Previous research suggested the exodus from Africa started between 70,000 and 40,000 years ago.

However, archaeological findings revealed in 2014 suggested that migrations of modern humans out of Africa began at least 100,000 years ago. Moreover, at the Ethiopian sites of Omo and Herto, scientists discovered fossils about 195,000 and 160,000 years old, respectively, that the researchers suggested were H. sapiens. Furthermore, a genetic study in 2017 suggested that modern humans may have interbred with Neanderthals in Germany more than 220,000 years ago.

To shed light on the dispersal of modern humans from Africa, researchers focused on the Middle East. Previous research suggested this area was likely a major corridor for modern humans and archaic human lineages such as Neanderthals as they migrated from Africa.

The scientists investigated the left part of an adult upper jaw found in Misliya Cave, one of several prehistoric caves along the western slopes of Mount Carmel in Israel. A student found the fossil in 2002 during a dig, said study co-lead author Israel Hershkovitz, a physical anthropologist at Tel Aviv University in Israel.

The researchers used three independent dating techniques on the jaw, dubbed Misliya-1, revealing that its owner lived between 177,000 and 194,000 years ago. Before this discovery, the earliest modern human fossils unearthed outside Africa were estimated to be between 90,000 and 120,000 years old.

X-ray scans and virtual 3D models of the eight teeth still in the jaw fragment suggest that these teeth are somewhat large for modern humans, the researchers said. However, the scientists added that the shapes of the teeth clearly show that they belong to the modern human lineage as opposed to the Neanderthals, the closest extinct relatives of modern humans.

Whoever shaped the stone tools excavated near Misliya-1 would have used a sophisticated method called the Levallois technique. This suggests the emergence of this advanced method of stone-tool creation was linked to the appearance of modern humans in this region, as was previously seen in Africa. Other artifacts found in Misliya Cave indicate that the people there could build fires in hearths and were hunters capable of capturing big game, such as deer, gazelle and large wild cattle known as aurochs, said study co-lead author Rolf Quam, a paleoanthropologist at Binghamton University in New York state.

What it all means

Features of this new fossil look more like those seen in current humans than in fossils of similar age from the Ethiopian sites of Omo and Herto, the researchers said. The fact that such modern features evolved earlier than previously thought "suggests that our biological history needs to be pushed back to a much earlier period — not 200,000, but probably 500,000 years," Hershkovitz told Live Science.

"The history of our own species, Homo sapiens, is longer and probably more complicated than scientists had previously believed," he said.

The fact that modern humans may have left Africa earlier than previously thought might also help explain puzzling discoveries, such as "the presence of modern humans in China at 120,000 years," Hershkovitz said.

These new findings also shed light on which routes modern humans might have taken on their exodus from Africa. The fossils support the idea that modern humans "migrated outside of Africa through the northern route — the Nile Valley and the eastern Mediterranean coast — and not through the southern route — the Bab el Mandeb Strait, the southern coast of Saudi Arabia, the Indian subcontinent, East Asia," Hershkovitz said.

It is possible, though not likely, that those fossils hold retrievable DNA, Quam said. "Normally, fossils from regions that are hot are less likely to preserve DNA," Quam said.

The scientists detailed their findings in the Jan. 26 issue of the journal Science.