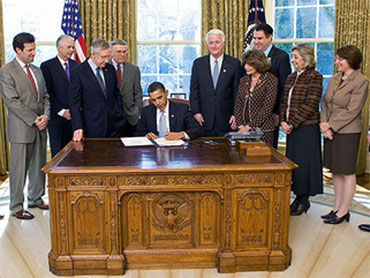 In the Oval Office this morning, President Obama signed legislation to launch a campaign to promote foreign travel to the U.S.

Senate Majority Leader Harry Reid is a leading proponent of the measure. His home state of Nevada, led by Las Vegas, depends heavily on tourism.

"We hope within two or three months, we'll be promoting ourselves," Reid said, clearly making an increase in tourism a plank of his re-election drive.

The Travel Promotion Act will create a nonprofit corporation to encourage and facilitate foreign travel to America. Costs of the program will be shared by the public and private sectors. The federal government is expected to provide up to $100-million a year. The funds would come from a $10 fee slapped on travelers from the 35 countries that are part of the Visa Waiver Program in the U.S.

Reid says that encouraging foreign travel to the U.S. will "save half a billion dollars over ten years and create tens of thousands of jobs."

The new law has bipartisan support. Members of Congress of both parties were invited to watch Mr. Obama sign the measure, though it was off-limits to press coverage.

The bill passed the House and Senate by sizeable margins.

It remains to be seen what kind of advertising slogans the corporation will come up with to encourage travel to the U.S. Not everything about us might be appealing to foreigners.

It's doubtful, for example, we'll see a commercial that says: "Come to America. Join the debate over health care reform."