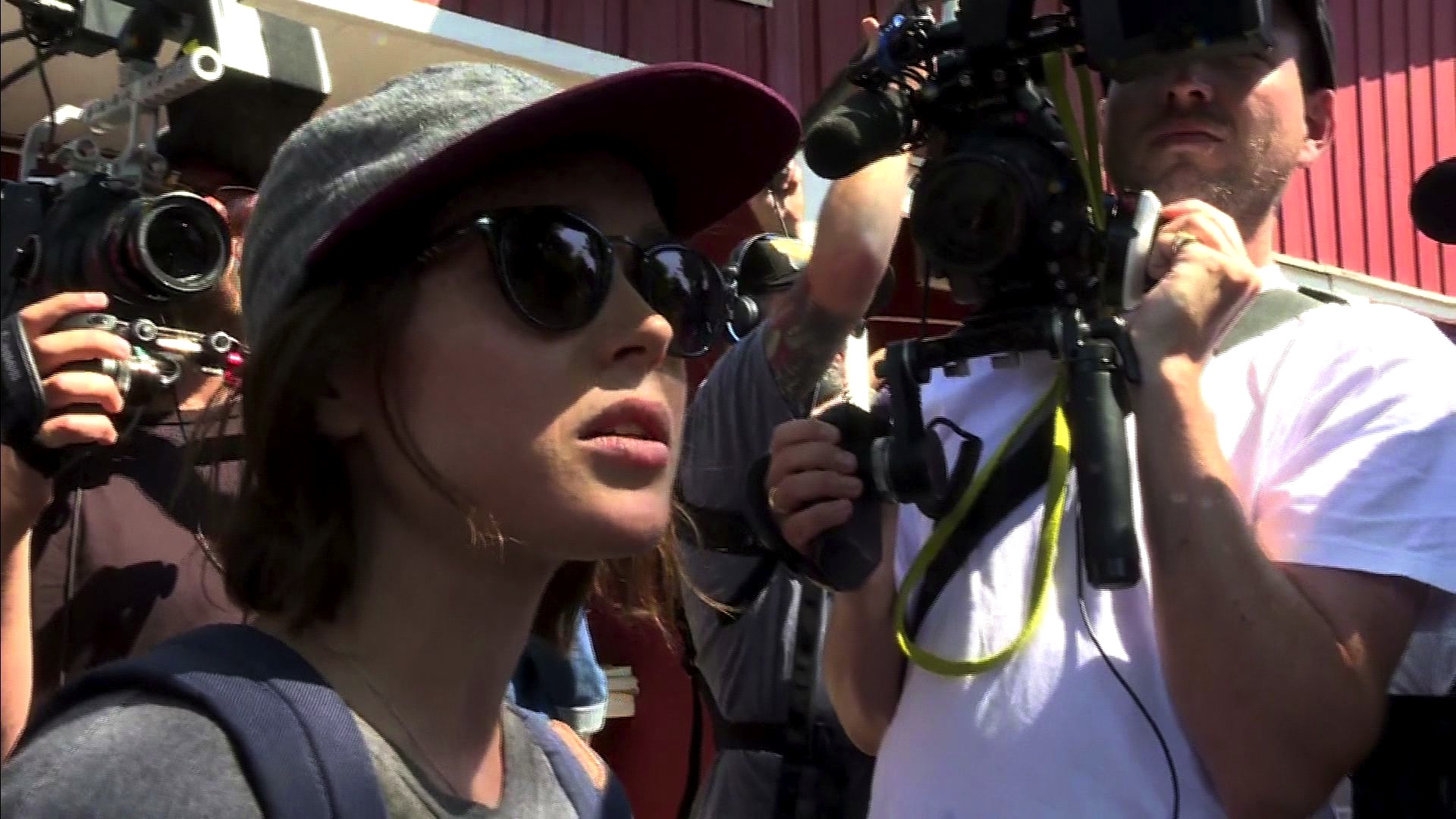 DES MOINES, Iowa -- "Can we ask you questions right now?" Canadian actress Ellen Page said to Ted Cruz just moments after he took a big bite out of a pork chop wrapped in tinfoil. I asked her what she had come to talk to Cruz about, and she said, "Gay stuff."

Cruz did not immediately answer her. Page, wearing a baseball cap and sunglasses, turned to one of the three people who had accompanied her (one of whom had brought a camera to record their encounter) to the Iowa State Fair, and said quietly, "I've gotta Michael Moore this a little bit better." She then dove into her questions.

"Can I ask you questions about the religious bill and rally?" Page queried, likely referring to the various religious freedom bills that have come up in some states, that might be used to allow citizens to cite their religion in denying some services to gays and lesbians.

The Texas senator and GOP presidential candidate gave his assent, still holding onto his pork chop. Page, who is openly gay, asked a broad opening question about his views on the use of religious liberty to justify discrimination against the LBGT community. She cited racial segregation and women's suffrage movements as other examples of groups that suffered discrimination in the name of religious freedom.

Page remained calm but fired back.

"Yes, but a lot of religious people also used the Bible to defend segregation, to defend slavery...LBGT people are worried that they might be discriminated against because of the bill, you know," Page said.

The two had a lively debate that lasted about five minutes. Cruz explained that he does not want "to force anyone to abandon their religion" but he would not address Page's assertion that LBGT Americans are getting fired for their sexual identity. He asserted that Christians are being persecuted for their faith, and Page retorted that it was because they are discriminating against the LGBT community.

Cruz said Americans should respect diversity and allow people to live by their faith, which was not enough of an answer for Page.

"In a lot of states, LGBT people can be fired for just being gay or just being trans, [and] that's totally legal. I mean how do you feel about that? That just doesn't sound very American to me," Page argued. She announced she was gay just over a year ago.

Cruz defended the right of religious conservatives to deny certain services that directly oppose their beliefs and dove into his oft-repeated story about the Odgaards, devout Mennonites, who were sued and eventually forced to close their Lutheran church shop because they did not allow a gay couple to get married there. Cruz has met with them multiple times and uses their story to illustrate the need for religious liberty rights. In fact, they will attend his rally Friday night.

The exchange grew more heated when the argument expanded to other countries. Cruz explained that ISIS and Iran are persecuting and executing gay people, while Page countered, saying that Christians in Uganda and Jamaica are persecuting gays.

"Does that trouble you at all that you draw a moral equivalence between Christians in Jamaica and radical Islamic terrorists in ISIS that are beheading children -- they're not morally equivalent. Murder is murder is murder - and it's wrong. And it's wrong across the board," Cruz said adding that Jamaicans are not murdering people.

"A lot of gay people are getting killed in Jamaica," Page said.

Cruz countered, "But in Iran and ISIS, it is the governmental body that is executing them for being homosexual..."

"...and why does the Obama administration not stand against them?" Cruz asked.

"I don't know, I would love to speak with Obama about it," Page said.

"Well, great, then we're agreed on that," Cruz said. Page seemed unsatisfied, but she nodded and walked away. Cruz still had his pork chop in hand.