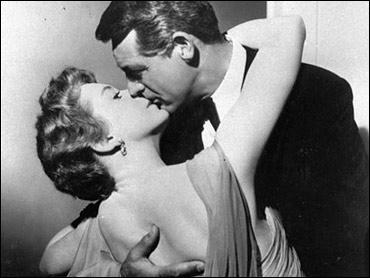 She was ladylike, wearing dramatic gowns with an ease both envied and admired.

And she was sexy, pushing the envelope in ways that riveted moviegoers on both sides of the Atlantic.

British actress Deborah Kerr, a Hollywood icon who shared one of cinema's most famous kisses as an army officer's unhappy wife in "From Here to Eternity" and danced with the Siamese monarch in "The King and I," died Tuesday at the age of 86.

Kerr, who suffered from Parkinson's disease, died in Suffolk, eastern England, according to her agent, Anne Hutton.

Kerr's roles as forceful, sometimes frustrated women expanded the limits of Hollywood's treatment of sex on the screen during the censor-bound 1950s.

For many she will be remembered best for her passionate clinch in the surf with Lancaster in the 1953 wartime drama "From Here to Eternity" - regularly voted as one of the greatest kisses ever captured on film.

2Other memorable roles included Anna Leonowens, the widowed governess who falls for the king of Siam in "The King and I."

Kerr's film roles were eclectic, ranging from nuns to a "Bond girl" in the 007 spoof "Casino Royale."

Born in Helensburgh, Scotland in 1921, Kerr trained as a ballet dancer, began her acting career in regional British theaters and entertained the troops during World War II. Her first major screen role was in an adaptation of George Bernard Shaw's "Major Barbara" in 1941.

She made two memorable appearances in films by British directing duo Michael Powell and Emeric Pressburger - in three roles as the hero's love interests in "The Life and Death of Colonel Blimp" (1943), then as sister superior to a group of nuns facing temptation in the Himalayas in the fantastical "Black Narcissus" (1947).

The latter film brought her to the attention of Hollywood, and she went on to appear opposite the era's biggest stars, including Robert Mitchum, David Niven, Stewart Granger and Spencer Tracy - and to work with many top directors, including John Huston, Otto Preminger and Elia Kazan.

Tired of being typecast in serene, ladylike roles, she rebelled to win a release from her MGM contract and get the role of Karen Holmes, the alcoholic, sex-starved army wife who has a fling with Lancaster in "From Here to Eternity."

In 1957, she and Cary Grant played star-crossed lovers who arrange to meet atop the Empire State Building in the enduring - and much-imitated - romance "An Affair to Remember."

She had a reputation as a "no problem" actress.

"I have never had a fight with any director, good or bad," she said toward the end of her career. "There is a way around everything if you are smart enough."

After "The Arrangement" in 1968, she took what she called a "leave of absence" from acting, saying she felt she was "either too young or too old" for any role she was offered.

3She switched to the stage, acting in Edward Albee's "Seascape" on Broadway and "Long Day's Journey Into Night" in Los Angeles. Her last movie role was in "The Assam Garden" in 1985.

She never won, but in 1993 she received an honorary Oscar for her contribution to the film industry. The citation called her "an artist of impeccable grace and beauty, a dedicated actress whose motion picture career has always stood for perfection, discipline and elegance."

In 1997 she was made a Commander of the Order of British Empire, or CBE, by Queen Elizabeth II.

In 1945 Kerr married Anthony Charles Bartley, whom she had met when he was a squadron leader in the Royal Air Force. They had two daughters, and divorced in 1959.

A year later, she married Peter Viertel, a novelist-screenwriter, with whom she lived on a large estate with two trout ponds in the Swiss Alpine resort of Klosters and in a villa in Marbella, Spain. Kerr later returned to England as her health worsened.

She is survived by Viertel, two daughters and three grandchildren.