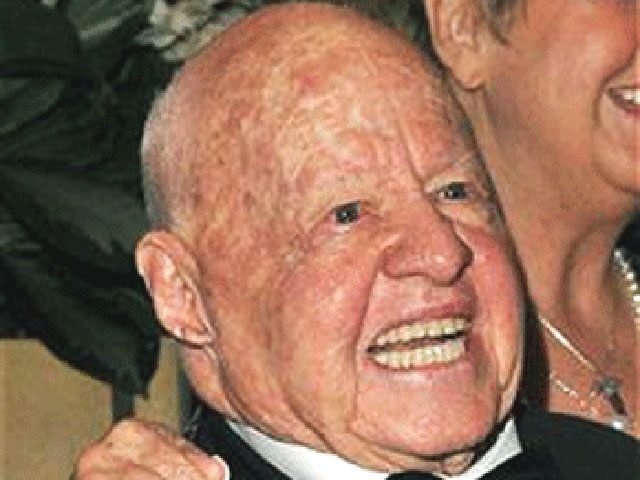 (CBS/KCBS/AP) Actor Mickey Rooney has been granted a temporary restraining order against his stepson, who is accused in court filings of withholding food and medicine from the 90-year-old Hollywood legend and meddling in his personal finances.

"Mickey is effectively a prisoner in his own home," the court filing states.

The order requires Aber, 52, to stay at least 100 yards from Rooney and his home, as well as from his other stepson, 48-year-old Mark Aber Rooney, and the latter's wife, 58-year-old Charlene Rooney, until a hearing on Feb. 24, when the restraining order may be extended, reports CBS affiliate KCBS.

Rooney fears Aber want to divert the actor's assets for his own use, force him to sign documents that would turn over his rights to Aber and require him to make appearances at public events where he does not wish to be, says KCBS.

"All I want to do is live a peaceful life, to regain my life and be happy," Rooney wrote in a statement. "I pray to God each day to protect us, help us endure, and guide those other senior citizens who are also suffering."

Rooney's film career spans more than eight decades and he received four Academy Award nominations and an honorary Oscar. In the 1930s and '40s he played Andy Hardy in a series of films, and received his first Oscar nominations in 1939 for "Babes in Arms" and in 1943 for "The Human Comedy."