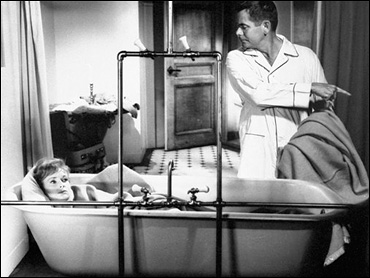 Actor Glenn Ford, who played strong, thoughtful protagonists in films such as "The Blackboard Jungle," "Gilda" and "The Big Heat," died Wednesday, police said. He was 90.

Ford suffered a series of strokes in the 1990s.

Failing health forced him to skip a 90th birthday tribute on May 1 at Hollywood's Grauman's Egyptian Theatre. But he did send greetings via videotape, adding, "I wish I were up and around, but I'm doing the best that I can.... There's so much I have to be grateful for."

An avid horseman and former polo player, Ford appeared in many Westerns – including "3:10 to Yuma," with Van Heflin; "Cowboy," with Jack Lemmon; "The Rounders," with Henry Fonda; "Texas," with William Holden; "The Fastest Gun Alive," with Jeanne Crain and Broderick Crawford; "Cimarron", with Anne Baxter; and "The Sheepman," with Shirley MacLaine – but his acting talents also ran to comedy and romance.

Ford appeared in scores of movies during his 53-year Hollywood career. The Film Encyclopedia, a reference book, lists 85 films from 1939 to 1991.

Ford's film credits include "A Stolen Life," a 1946 melodrama with Bette Davis playing twins in love with a lighthouse inspector; "The Teahouse of the August Moon," a 1956 satire with Marlon Brando set in U.S.-occupied Japan; "Don't Go Near the Water," a 1957 comedy about the Navy in World War II; "The Gazebo" and "It Started with a Kiss," 1959 comedies with Debbie Reynolds and a long list of actors who became beloved on television; "Pocketful of Miracles," in 1961 with Bette Davis and Peter Falk; "The Courtship of Eddie's Father," a 1963 comedy with Shirley Jones and Stella Stevens in which his romantic plans are foiled by a very young Ron Howard; and 1978's "Superman: The Movie," in which he played Jonathan Kent to Christopher Reeve's budding Man of Steel.

On television, Ford appeared in "Cade's County," "The Family Holvak," "Once an Eagle" and "When Havoc Struck."

A tireless worker -- Ford often made several films a year -- Ford continued working well into his 70s. In 1992, though, he was hospitalized for more than two months for blood clots and other ailments, and at one point was in critical condition.

"Noel Coward once told me, 'You will know you're old when you cease to be amazed.' Well, I can still be amazed," said Ford, in a 1981 interview with The Associated Press.

After getting his start in theater in the 1930s, he got a break when he was signed by Columbia Pictures mogul Harry Cohn.

In 1940, Ford appeared in five films, including "Blondie Plays Cupid" and "Babies for Sale." After serving with the Marines during World War II, Ford starred in 1946 as a small-time gambler in "Gilda," opposite Rita Hayworth.

The film about frustrated romance and corruption in postwar Argentina became a film noir classic. Hayworth plays Ford's former love, a sometime nightclub singer married to a casino operator, and she sizzles onscreen performing "Put the Blame on Mame."

Ford speaks the memorable voiceover in the opening scene: "To me, a dollar was a dollar in any language. It was my first night in the Argentine and I didn't know much about the local citizens. But I knew about American sailors, and I knew I'd better get out of there."

Two years later he made "The Loves of Carmen," also with Hayworth.

"It was one of the greatest mistakes I ever made, embarrassing," Ford said of the latter film. "But it was worth it, just to work with her again."

Among his competitors for leading roles was William Holden. Both actors, Ford said, would stuff paper in their shoes to appear taller than the other. "Finally, neither of us could walk, so we said the hell with it."

One of his best-known roles was in the 1955 "The Blackboard Jungle," where he portrayed a young, soft-spoken teacher in a slum school who inspires a class full of juvenile delinquents to care about life. In "The Big Heat," 1953, a gritty crime story, he played a police detective.

"Acting is just being truthful," he once said. "I have to play myself. I'm not an actor who can take on another character, like Laurence Olivier. The worst thing I could do would be to play Shakespeare."

He was born Gwyllyn Samuel Newton Ford on May 1, 1916, in Quebec, the son of a railroad executive. The first name reflected his family's Welsh roots. When Ford joined Columbia, Cohn asked him to change his name to John Gower; Ford refused but switched his first name to Glenn, after his father's birthplace of Glenford.

He moved to Southern California at 8 and promptly fell in love with show business, even sneaking onto a Culver City studio lot at night. He took to the stage at Santa Monica High School. His first professional job was as a searchlight operator in front of a movie house.

He started his career in theater, as an actor with West Coast stage companies and as Tallulah Bankhead's stage manager in New York. In 1939, he made his first Hollywood film opposite Jean Rogers in the romance "Heaven With a Barbed Wire Fence."

His director, Ricardo Cortez, told Ford he would never amount to anything and the actor returned to New York. He didn't stay away from Hollywood long, though, signing a 14-year contract with Columbia Pictures.

He married actress-dancer Eleanor Powell in 1943; the two divorced in 1959. They had a son, Peter. A 1965 marriage to actress Kathryn Hays ended quickly. In 1977, he married model Cynthia Hayward, 32 years his junior. They were divorced in 1984.