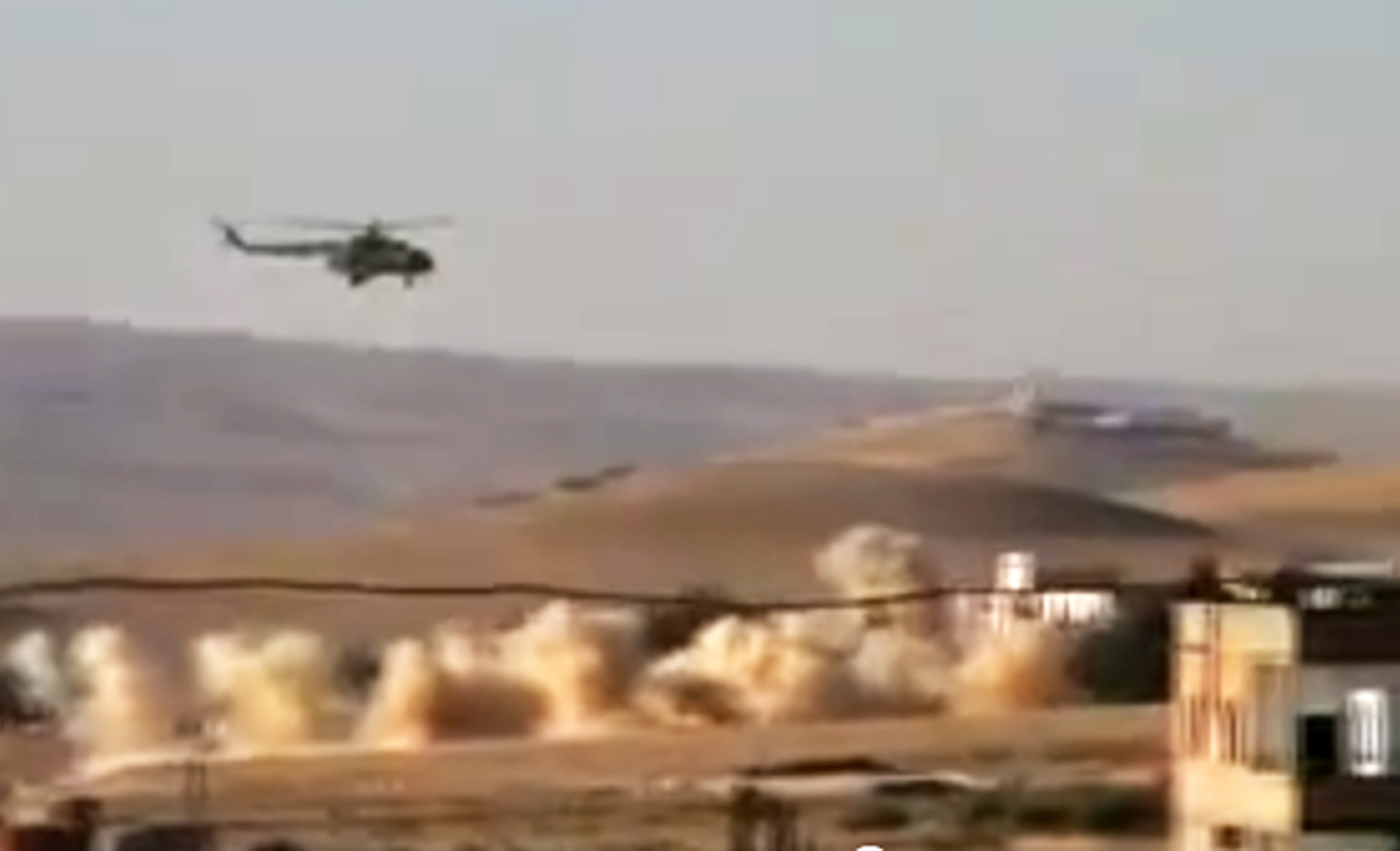 (AP) BEIRUT - With warplanes circling overhead, Syrian attack helicopters pounded rebel-held neighborhoods in Aleppo on Tuesday in an escalation of the battle for the country's commercial capital and largest city, residents and activists said.

Following a pair of rebel assaults on the country's two main cities and a bombing that wiped out some of his top security last week advisers, President Bashar Assad on Tuesday reshuffled his top intelligence posts, dismissing one general and appointing a new national security council chief to replace the one killed in the blast.

The Syrian regime, deeply shaken after last week's stunning attack on Assad's inner circle and rebel advances, has turned to heavy weapons like artillery and helicopter gunships to uproot the opposition fighters in Damascus and now in Aleppo, Syria's largest city at around 3 million.

"It's like a real war zone over here, there are street battles over large parts of the city," said Aleppo-based opposition activist Mohammed Saeed by telephone as the sound of gunfire and explosions could be heard in the background. "Aleppo has joined Homs and Hama and other revolutionary cities."

Four days into the rebel attack on Aleppo, Saeed estimated that the opposition fighters were holding large chunks of the city.

Facing a resilient opponent, the government responded Tuesday with attack helicopters to pound rebellious neighborhoods, and fighter jets circling overhead periodically roared down and broke the sound barrier in an apparent attempt to cow the rebels.

"It's the worst day of fighting in Aleppo so far, but I can't tell what's happening on the ground or who's in control," said a local writer in the Zahra neighborhood, about 3 miles (5 kilometers) from some of the heaviest clashes.

"This is bad because in the end it's the civilians who will pay the price of this street fighting," he added on condition of anonymity for fear of reprisals.

For the time being, Syria's rebels, outmanned and outgunned by the regime's professional army, appear to be holding out in Aleppo. The battle has spread from neighborhoods in the northeast and southwest of the city to previously untouched areas like Firdous in the south and Arkoub closer to the center, local activists and the Britain-based Syrian Observatory for Human Rights said.

On Sunday, a newly formed alliance of rebel groups called the Brigade for Unification announced an operation to take the city. While the rebels have not shown themselves able to hold neighborhoods for any significant period of time, the continued fighting highlights the government's inability to definitely defeat the lightly armed opposition forces.

Prisoners in Aleppo's jail also rioted overnight and activists said at least eight have been killed by government forces. Another prison riot in the city of Homs was quelled with tear gas and live ammunition.

The worsening situation in Syria, where activists estimate more than 19,000 people have died since March 2011, has prompted increasing concern and veiled threats from Syria's neighbors.

Monday night, Turkish Prime Minister Recep Erdogan told a party rally that "we believe that the people of Syria are ever closer to victory," while in Saudi Arabia, a country that has openly pledged to fund rebels, state television announced the country had collected $32 million in donations for "our brothers in Syria."

Israeli Prime Minister Benjamin Netanyahu over the weekend expressed fears that Syria's chemical weapons could fall into the hands of the Iranian-backed militant group Hezbollah and hinted at intervention, though on Tuesday, senior Defense Ministry official Amos Gilad asserted that Syria had "complete control" over its unconventional weapons.

Iran then waded into the fight Tuesday with a warning by the commander of the powerful Revolutionary Guards, Gen. Masoud Jayazeri, to retaliate if any Arab countries intervened against Syria.

For its part, Syria warned the international community Monday that it had chemical weapons and would use them in the case of any foreign aggression.

In a speech before a veterans' association in Reno, Nevada, President Barack Obama cautioned Syria against unleashing its non-conventional arsenal.

"Given the regime's stockpiles of chemical weapons, we will continue to make it clear to Assad and those around him that the world is watching, and that they will be held accountable by the international community and the United States, should they make the tragic mistake of using those weapons," he said.

Assad on Tuesday reshuffled the generals at the core of his regime's highly secretive security apparatus. A government official said that Assad appointed Maj. Gen. Ali Mamlouk, the former head of General Intelligence, to the key post of head of the National Security Council. His predecessor, Maj. Gen. Hisham Ikhtiyar, died of wounds sustained in last week's bombing.

Maj. Gen. Abdel Fattah Qudsiyeh, the former head of Military Intelligence, was named the council's deputy chief, replacing a general who was apparently fired. The EU has imposed sanctions on Qudsiyeh for his role in the crackdown on the uprising. The official spoke on condition of anonymity in order to discuss security matters.