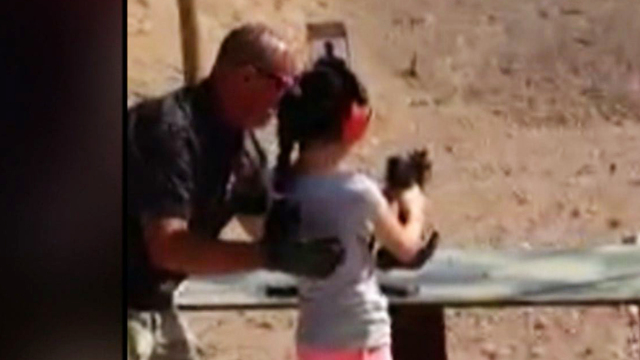 The Bullets and Burgers shooting range in the Arizona desert promotes itself in online videos as a place for family fun firing machine guns. It is one of several Las Vegas area tour stops that offers visitors a chance to try out exotic weapons.

Video released by the Mojave County Sheriff's office shows the moments before the accidental shooting of employee Charles Vacca, 39.

The military veteran is showing a 9-year-old girl how to shoot an Uzi submachine gun, a weapon that can fire 16 rounds a second.

"Okay, turn this leg forward," he tells the unidentified girl. "There you go, just like that. Alright, go ahead and give me one shot."

Then the gun is set to automatic.

Dozens of COVID cases linked to Olympic Games in Tokyo

The gun then recoiled, pointed up and Vacca was shot in the head and killed.

"[I] really don't know what happened," said Sam Scarmado, range operator at Bullets and Burgers. "I mean, our guys are trained to basically hover over people when they're shooting."

Another video does show an employee hovering with his hand on the shoulder of a young shooter, standing on the same side as the gun and ready to push it out of the way.

"Yeah, good job," says the instructor. "Keep it firm into your shoulder. Just like that. Okay, go."

The video of Vacca shows his hand on the girls back, not on her shoulder, and standing on the side opposite the Uzi.

There is no requirement in Arizona for gun range employees to be certified as firearms instructors. The National Rifle Association said Charles Vacca was not an NRA certified instructor.