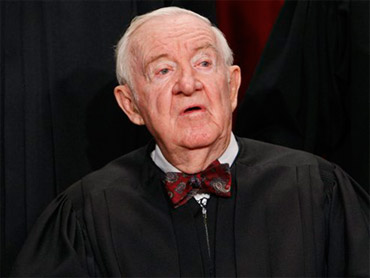 Watch CBS News Videos Online
Today is Justice John Paul Stevens' final day on the Supreme Court - across the street at the Senate, confirmation hearings for his potential successor, Elena Kagan, have just gotten underway - and it attracted a small group of protesters who showed up at the court to decry Stevens for his decisions on abortion.

At left you can see video of the protesters, via CBS News digital journalist Fernando Suarez and cameraman Don Lee.

One protester, dressed as the grim reaper, wielded a megaphone into which he suggested Stevens will go to hell. Another, bearing a sign reading "Abortionists for Justice Stevens," repeatedly stabbed a baby doll spattered with what appeared to be blood.

It is not known if Stevens, who voted to uphold the Roe Vs. Wade decision legalizing abortion, was aware of the protests. Police eventually forced the protesters off the steps of the Court.