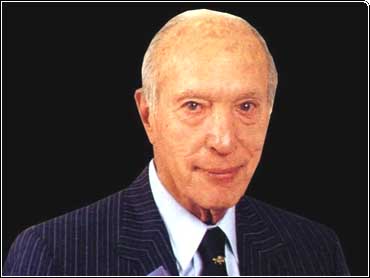 Pioneering TV executive Leonard H. Goldenson, who raised a struggling ABC network to parity with CBS and NBC, died Monday. He was 94.

Goldenson died at his home in Longboat Key, near Sarasota, a statement from ABC said. The network gave no cause of death but said he had been in ill health for several years.

Goldenson was overshadowed in the public eye by the overlords of the other two networks, William Paley of CBS and David Sarnoff of NBC. But he proved his mettle when ABC -- starting later, with many fewer stations and without the stars, tradition and money of its rivals -- muscled into first place in viewer popularity in 1977.

The network remained on top for the next three years, riding the success of shows like Happy Days, Laverne and Shirley and Charlie's Angels.

"Leonard Goldenson was a giant among broadcasters, and his influence on the business today is wide-ranging. He was a risk-taker," said Robert Iger, chairman of the ABC Group.

Along the road to the top, Goldenson got Hollywood movie studios to start producing for the medium, nurtured unknowns into stars to compete with the other networks' established names and built audiences by covering and promoting sports.

"We had to gamble. We rolled the dice a lot," Goldenson said early in 1991 in an interview to promote his autobiography, Beating the Odds.

"Anybody more deadly than a television executive, I haven't found yet," Goldenson said in a self-deprecating comment.

It was 1953 when Goldenson, as chief executive of United Paramount Theaters, grabbed the opportunity to buy the near-bankrupt ABC, born 10 years earlier when RCA was ordered to divest itself of one of its two networks.

At the time of the purchase, ABC was No. 4, behind CBS, NBC and the now-defunct DuMont network.

The network had 14 stations -- five of its own and nine affiliates, compared with nearly 100 stations each for CBS and NBC.

Thirty-three years later, when Goldenson stepped down as day-to-day boss after engineering a $3.5 billion merger of ABC and Capital Cities Broadcasting, the network had eight stations and 210 affiliates. The company's list of other properties included ownership or substantial interest in three cable networks, 17 radio stations, 11 daily newspapers and numerous trade and speciality publications.

Capital Cities/ABC was bought by Disney for a then-record $19 billion in 1996.

After turning over the reins to Thomas Murphy in 1986, Goldenson moved from the media capital to Florida, but for a time afterward he commuted to New York to advise the company in his role as chairman of the Capital Cities-ABC executive committee.

In a 1991 Associated Press interview, he said networks still had a future, even though cable TV was making inroads.

"You have to realize the number of homes using television is increasing," he said at the time. "By the ear 2000, there'll be basically 100 million television homes, compared to 93.1 million now." His count, at least, proved accurate: At present, there are an estimated 100.8 million TV homes in the United States.

Goldenson was born Dec. 7, 1905, in Scottdale, Pa., a coke-and-steel town where his father ran a clothing store. He attended Harvard and graduated from its law school in 1930.

Goldenson and his wife, Isabelle Weinstein, were married in 1939 and had three daughters. The first, Genise Sandra, suffered from cerebral palsy and died at age 29. The other two, Loreen Arbus and Maxine Goldenson, became television producers. He is survived by his widow, two daughters and one grandson.

Goldenson was a founder and president of United Cerebral Palsy. He also was active in behalf of the Children's Cancer Research Foundation in Boston, the Will Rogers Hospital in Saranac Lake, N.Y.; and Daughters of Jacob Geriatric Center in New York, and served on national commissions on the handicapped.