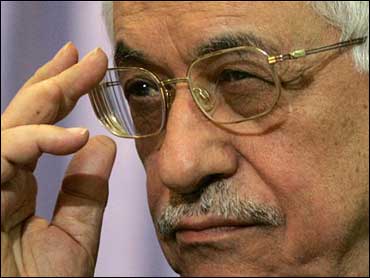 Just hours before a deadline, Palestinian President Mahmoud Abbas said Monday he won't back down from an ultimatum to the Islamic Hamas group to accept a plan implicitly recognizing Israel.

The standoff set the stage for Abbas to announce a referendum on the issue — a move that is sure to enrage the Hamas-led government in the short term but could offer it a way out of its world isolation. For now, the militants show no interest in grabbing the potential lifeline.

Also Monday, Israeli aircraft fired missiles at a car in the Jebaliya refugee camp next to Gaza City, the military said, killing two militants and wounding two bystanders, according to Palestinian hospital officials.

Israel said the main target, a militant from the renegade Popular Resistance committees, was involved in firing rockets at Israel. He died of his wounds.

Abbas has given Hamas until Tuesday to accept the proposal, which calls for a Palestinian state alongside Israel. Accepting the proposal would require Hamas, which is sworn to Israel's destruction, to implicitly recognize the existence of the Jewish state.

A last-ditch negotiating session Monday night was called off, and participants acknowledged there was little chance of reaching a deal before a midnight deadline.

Hamas has been calling for more time to discuss the proposal and suggested changes in the language. But Abbas, who has avoided confrontation since taking office early last year, rejected Hamas' demands Monday.

"If anyone wants to amend this document, then we will not reach any results," Abbas told reporters after meeting with European Union foreign policy chief Javier Solana.

Officials close to Abbas said he was consulting with legal experts to prepare for the referendum. He planned to meet Tuesday with senior PLO officials before issuing a presidential decree. The vote is expected roughly one month later.

Abbas has endorsed the plan as a way to end crushing sanctions against the Palestinians and allow him to resume peace talks with Israel.

The United States, European Union and Israel have cut off cash transfers to the Palestinian government since Hamas won legislative elections earlier this year. The Western countries want Hamas to renounce violence and recognize Israel.

The plan was formulated by politically powerful Hamas and Fatah prisoners held in Israeli jails. But the group's exiled leaders, who make final decisions on policy, have refused to accept the proposal.

Palestinian Prime Minister Ismail Haniyeh, in a brief interview with Israel's Channel 10 TV, favored "a continuation of the dialogue," and opposed the deadline, which he called "a sword at our necks."

Hamas spokesman Sami Abu Zuhri said the group was ready to continue negotiations, but rejected any deadline set by Abbas. "We are against the referendum. We are not going to accept it, and we reject this referendum," he said.

The dispute comes amid an increasingly violent power struggle between Abbas and the Hamas-led government. Since Hamas was sworn into office in March, Abbas has taken steps to curb its authorities.

Many Palestinians are uneasy about the referendum, though polls show the document would be approved easily. In Gaza, Mohammed Abu Seido, a coffee shop cashier, said he would vote for the document, but he worried that Hamas would react with violence if it is approved. "Hamas is already failing," he said.

The Palestinians have never held a referendum before, and officials said the vote would not be binding. But passing the referendum could give Abbas an important boost in his standoff with Hamas.

"It would bolster his legitimacy and give him power to go ahead with negotiations with Israel," said Azam al-Ahmad, a top Fatah official. Al-Ahmad also said Abbas, who wields considerable powers, would consider calling elections for president and parliament if Hamas did not abide by the results of a referendum.

Hamas says that accepting the plan would mean abandoning its principles. It also says a referendum isn't necessary because Palestinian voters chose its political program in legislative elections earlier this year.

The Palestinian infighting has turned deadly in recent weeks. Sixteen people have died in clashes between Hamas and Fatah loyalists, including five killed Sunday. Five Palestinians were wounded in two clashes Monday in the southern city of Khan Younis, security officials said.

Hamas has stuck to its tough line on Israel despite the international boycott, which has left the government unable to pay the salaries of tens of thousands of civil servants for three months.

Hamas officials promised over the weekend to begin paying overdue salaries. But on Monday, the government failed to meet its pledge, causing widespread confusion in the Palestinian areas and prompting angry workers to storm one Gaza City bank.

Some banks advanced money to unpaid civil servants to help calm the situation. In some cases, people received money. In others, the promised payments failed to materialize. Tens of thousands of workers remained without paychecks, with the government as far away as ever from ending the boycott.

"These are people who don't have money to buy milk," said policeman Raed Abu Ghoneima, one of the protesters who stormed a Gaza City branch of the Arab Bank. "It has nothing to do with politics; it's about wages."