The superhero proved a breakthrough TV role for Lynda Carter back in the 1970s. Today, she has a whole new career as a singer ... but does she still have her Wonder Woman costume? Rita Braver found out in the course of preparing this Sunday Profile:

It is a role that will always define Lynda Carter, the superheroine whose golden lasso no one could resist.

But guess what . . . Wonder Woman sings! She started singing professionally when she was just 14.

"I sang in everything I could," she said.

Her new album is called "At Last," because it has taken her years to come back to the music on which she grew up, in Arizona, where her mom (Hispanic) and her dad (Irish-American) split when she was a child.

She went to work in a restaurant when she was 11.

"My uncle had a restaurant," Carter told Braver. "It was the summer. And I probably ended up breaking a lot of dishes! I had fun doing it."

She said such work wasn't a burden. "I cleaned houses, too. Now I look back, I spent a half-day in these people's house for five dollars."

No wonder she jumped at the chance to join a band. Imagine the choice: "You're 18 years old or 17 years old, and okay, 'Ill go to work in a restaurant, pay my way through college,' or 'I'm going to go on the road and sing in a band.' Well, you know, it really wasn't a choice."

But she said, after a while "the road really just sucked."

So she entered - and won - the Miss World USA beauty pageant.

"During my reign, I opened supermarkets, I went to bottling companies for Frosty Root Beer, and you really feel stupid putting this banner and this crown on your head!"

But ironically, her next stop was in Hollywood, where she won another crown, in 1975. She says she got the Wonder Woman role because, at 5 foot 10, she looked like the DC Comics character.

Carter herself came up with the famous costume-changing spin. And though the series lasted only a few seasons (on ABC and CBS), the show has become iconic.

"Why do you think it has touched a chord with people?" Braver asked.

Carter said it was the secret of the character, her greatest talents hidden until needed. "It's that powerful, capable, archetype of the 'secret self.'" 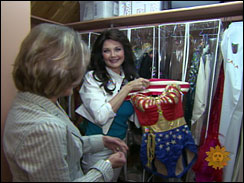 (CBS)
And she still has the iconic costume, hanging up in her closet.

She showed it to Braver, who asked, "When was the last time you had it on?"

Carter went on to do a series of highly-rated variety specials on CBS, where she got to dress up in over-the-top outfits, dance with Ben Vereen, and sing with Ray Charles.

But it was her stint as a Maybelline model that really changed her life.

At a dinner meeting in Memphis, she met Robert Altman, then a young Washington lawyer who represented Maybelline's parent company.

"She walked in," Altman recalled, "and I took one look at Lynda, and it (snap) like that, instant."

They married in 1984, and Carter put her career on hold to raise her son Jamie and daughter Jessie, on a sprawling estate in the Washington suburbs.

"Did you feel like you were really asking her to give up a lot to come here?" Braver asked.

"No," he laughed. "I thought I was enriching her life, not just depriving her.

"I loved Washington, it was thrilling to me," Carter said.

Their life became a "Who's Who" of showbiz and politics: President Bush, President Clinton, Prince Charles, George Burns, Elton John.

But the fairy tale life had some scary twists. In the early 1990s Altman was indicted in a bank fraud case, only to be completely acquitted.

And though she is still gorgeous enough at age 57 to model for magazines, Carter struggled with alcoholism for years.

"So you weren't drinking for a while," Braver asked, "then all of a sudden, you'd just …"

"Well, I would want to drink just like everybody else for the same reasons: I'm tired, it's hot, well, let's have a cocktail. But for me it led into drinking to excess."

With her husband's help, she went into rehab, and has been sober since 1997. 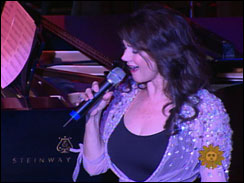 (CBS)
It was an offer to play the prison matron part in the London production of "Chicago" that got her back to singing.

"And I got the bug again, went back into small clubs, little itty-bitty 150-seat clubs to start."

Though audiences may come to see Wonder Woman, they stay to listen to Lynda Carter.

"You know, this piece is running on Father's Day," Braver, "and obviously, guys still think you're pretty hot, shall we say . . . "

"That must be gratifying?"

"Well, I think it's very gratifying," she said. "Are you kidding? I love that!"