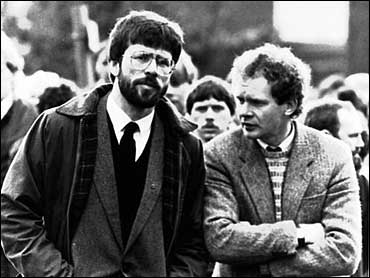 A history of the Irish Republican Army, published Monday, describes Gerry Adams as the IRA's longest-serving commander - and the mastermind behind a two-decade effort to steer the underground group toward cease-fires and political compromise.

"A Secret History of the IRA," written by one of Ireland's most respected reporters, Ed Moloney, says Adams joined the IRA's ruling Army Council in 1977 and sanctioned the secretive group's worst atrocities as he led its legal Sinn Fein party.

Adams, Sinn Fein chief since 1983, insisted he was never an IRA member and said the book repeated old allegations.

"This story has been peddled for ages now," Adams said. "Let me categorically deny the allegations of my involvement in the IRA."

Moloney, a Northern Ireland specialist since 1978, said Adams deserved the Nobel Peace Prize for his efforts to keep control of the IRA.

He said Adams coaxed the IRA toward the 1998 peace accord that set up a four-party government of British Protestants and Irish Catholics, including Sinn Fein.

"Some people might find Adams a deeply unattractive character, not someone you would want your daughter to marry. But there's absolutely no doubt the guy is a strategic genius without whom there would have been no peace process," Moloney said in an interview.

The author also identifies Sinn Fein deputy leader Martin McGuinness as a member of the IRA's ruling Army Council from 1977 to the present day. McGuinness, who has acknowledged he was once an IRA commander, is Northern Ireland's education minister.

Protestant hard-liners opposed to including Sinn Fein in the government said Monday they would try again to have McGuinness kicked out of office. Previous efforts to expel McGuinness didn't muster enough support from Catholic lawmakers.

The book also describes secret IRA meetings in the 1990s, when Adams allegedly outmaneuvered critics of his truce-and-talks agenda by telling rank-and-file members they could resume attacks if negotiations didn't go their way.

The critics were outvoted and resigned in 1997, founding a rival IRA group that the Irish media dubbed the Real IRA. That group committed Northern Ireland's deadliest atrocity, the 1998 car-bombing of Omagh that killed 29 people, and continues to mount occasional attacks.