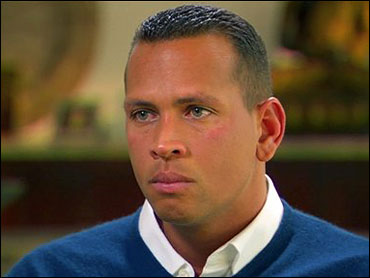 Alex Rodriguez's reputation is in tatters, his credibility shredded. Having admitted that he, too, cheated in baseball's steroids era, the New York Yankees star must go about rebuilding his image in the eyes of teammates, opponents and fans.

Following a weekend Sports Illustrated report that he flunked a drug test six years ago, baseball's highest-paid player told ESPN on Monday he used banned substances while playing with the Texas Rangers from 2001-03 to justify his 10-year, $252 million contract.

"If you're a fan of major league baseball, I think it tarnishes an entire era, to some degree," President Barack Obama said during his first presidential news conference.

Rodriguez was apologetic but was not forthcoming with details. He sidestepped a question about how he obtained the banned drugs and said he didn't even know what substance he was guilty of using.

"Back then it was a different culture," Rodriguez said. "It was very loose. I was young. I was stupid. I was naive, and I wanted to prove to everyone that, you know, I was worth, you know - and being one of the greatest players of all time."

He does hope he will be forgiven by Yankees fans, already frustrated because Rodriguez has failed to lead the team into the World Series during his five seasons in New York.

Not so fast says New York-area sports radio host Chris "Mad Dog Russo. Rodriguez is not a "real Yankee" in the eyes of most fans, Russo told CBS' The Early Show. However, he said Yankee fans would likely embrace Rodriguez again the next time he hits a big home run. "The (Yankee) fan wants to win," Russo said.

Rodriguez said he used banned drugs only while with Texas, and that he was clean when he played for the Seattle Mariners from 1994-2000. He said he quit during spring training in 2003, before the first of three AL MVP seasons, because "I've proved to myself and to everyone that I don't need any of that."

He was traded to the Yankees before the 2004 season, and said he hasn't used since.

The admission came two days after Sports Illustrated reported on its Web site that Rodriguez was among 104 names on a list of players who tested positive for steroids in 2003, when testing was intended to determine the extent of steroids use in baseball. The results weren't subject to discipline and were supposed to remain anonymous, but were seized by the government in 2004 and remain under seal.

"When I arrived in Texas in 2001, I felt an enormous amount of pressure. I felt like I had all the weight of the world on top of me and I needed to perform, and perform at a high level every day," Rodriguez said. "And I did take a banned substance and, you know, for that I'm very sorry and deeply regretful."

Rodriguez said part of the reason he started using drugs was the heat in Texas.

"Can I have an edge just to get out there and play every day?" he said to himself. "You basically end up trusting the wrong people. You end up, you know, not being very careful about what you're ingesting."

Though Rodriguez said he experimented with a number of substances, he never provided details.

"It was such a loosey-goosey era. I'm guilty for a lot of things. I'm guilty for being negligent, naive, not asking all the right questions," Rodriguez said. "And to be quite honest, I don't know exactly what substance I was guilty of using."

He said he stopped using during spring training 2003, when he sustained a neck injury. It was just as baseball started its drug-testing survey. It was only in 2004 that testing with penalties began.

Monday's ESPN interview directly contradicted a December 2007 interview with CBS's "60 Minutes", when Rodriguez said "No" when asked if he had ever used steroids, human growth hormone or any other performance-enhancing substance.

"I've never felt overmatched on the baseball field," he told CBS News Anchor Katie Couric. I felt that if I did my, my work as I've done since I was, you know, a rookie back in Seattle,

I didn't have a problem competing at any level
," he said.

"I feel personally betrayed. I feel deceived by Alex," Hicks said in a conference call. "He assured me that he had far too much respect for his own body to ever do that to himself."

"This is three years I'm not proud of," Rodriguez said.

Rep. Elijah Cummings, a Maryland Democrat who sits on the House committee that brought Roger Clemens, Mark McGwire and other baseball players to Capitol Hill in recent years, favored a congressional hearing with Rodriguez.

"It would be good perhaps for us to sit down and talk to him," Cummings said in a telephone interview. "I would think that he would want to cooperate with us so that the Congress would have the information it may need."

The Yankees said in a statement that "we urged Alex to be completely open, honest and forthcoming" and that "we take him at his word that he was."

"Although we are disappointed in the mistake he spoke to today, we realize that Alex - like all of us - is a human being not immune to fault," the team said. "We support Alex, and we will do everything we can to help him deal with this challenge."

Rodriguez's admission was in stark contrast to the denials of Bonds and of Clemens, Rodriguez's former Yankees teammate.

Bonds, a seven-time MVP, is scheduled for trial next month on charges that he lied when he told a federal grand jury in 2003 that he never knowingly used performance-enhancing drugs. Another federal grand jury is considering whether to indict seven-time AL Cy Young Award winner Clemens on charges he lied when he told a congressional committee last year that he never used steroids or human growth hormone.

"I wasn't even being truthful with myself," he said Monday. "Today, I'm here to tell the truth."