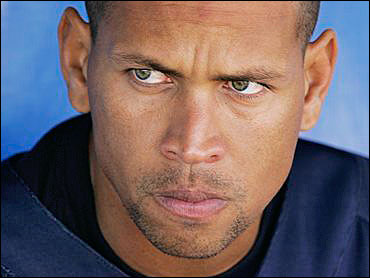 Alex Rodriguez, the player who would restore integrity to baseball's home run record, admitted Monday to using performance-enhancing drugs himself.

The All-Star third baseman said in an interview with ESPN that he used steroids with the Texas Rangers for three years, from 2001-03, in an attempt to justify his status as the game's highest-paid player after signing a 10-year, $252 million contract.

"Back then it was a different culture," Rodriguez said. "It was very loose. I was young. I was stupid. I was naive, and I wanted to prove to everyone that, you know, I was worth, you know - and being one of the greatest players of all time."

While A-Rod is suddenly coming clean, neither the Yankees nor Major League Baseball has had a reaction - at least not yet, reports CBS News chief investigative reporter Armen Keteyian.

He said he quit after 2003, his first of three AL MVP seasons, because "I've proved to myself and to everyone that I don't need any of that." He was traded to the New York Yankees before the 2004 season.

The admission came two days after Sports Illustrated reported on its Web site that Rodriguez was among 104 names on a list of players who tested positive for steroids in 2003, when testing was intended to determine the extent of steroid use in baseball.

Watch more from the interview with Sports Illustrated's Selena Roberts

The 2003 results weren't subject to discipline and were supposed to remain anonymous.

"When I arrived in Texas in 2001, I felt an enormous amount of pressure. I felt like I had all the weight of the world on top of me and I needed to perform, and perform at a high level every day," Rodriguez said.

"And I did take a banned substance and, you know, for that I'm very sorry and deeply regretful. And although it was the culture back then and Major League Baseball overall was very - I just feel that - You know, I'm just sorry. I'm sorry for that time. I'm sorry to fans. I'm sorry for my fans in Texas. It wasn't until then that I ever thought about substance of any kind."

It's depressing news on top of what's been a flurry of depressing items when it comes to Major League Baseball," said the president. Obama said the news sets a bad example for children. At least, he said, such revelations help kids learn that there are "no shortcuts." They are learning "you may end up tarnishing your entire career," the president said.

"I feel personally betrayed. I feel deceived by Alex," Hicks said in a conference call. "He assured me that he had far too much respect for his own body to ever do that to himself. ... I certainly don't believe that if he's now admitting that he started using when he came to the Texas Rangers, why should I believe that it didn't start before he came to the Texas Rangers?"

Now, though, he's on top of a much different list - the highest-profile player to confess to doping, joining teammates Jason Giambi and Andy Pettitte.

Rodriguez's admission is in stark contrast to the denials of former teammate Roger Clemens and Bonds.

"It was such a loosey-goosey era. I'm guilty for a lot of things. I'm guilty for being negligent, naive, not asking all the right questions," Rodriguez said. "And to be quite honest, I don't know exactly what substance I was guilty of using."

Rather than hold a news conference, as Giambi and Pettitte did for their confessionals, Rodriguez chose the controlled setting of an interview with ESPN, one of Major League Baseball's television partners.

The interview left open many questions: