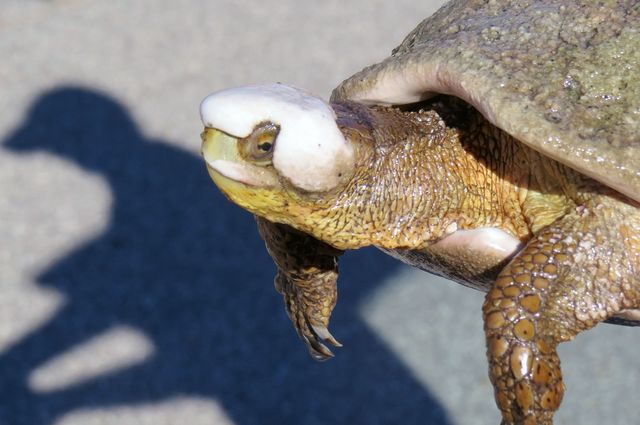 The turtles were acting weird.

"In the middle of a hot sunny day they were just wandering around on the shore of the lake and could barely move," Brad Shaffer, director of the UCLA La Kretz Center for California Conservation Science, recalled. "They were just acting very, very strangely."

Shaffer had gotten a call from biologists from the U.S. Geological Survey who have been monitoring a population of endangered southwestern pond turtles in Lake Elizabeth, in California's Angeles National Forest. "Word came through to several of us who work on turtles in California that the lake was very, very low and that the turtles looked really, really bad," Shaffer said. A few dead turtles had been spotted as well.

Elizabeth Lake is home to one of the largest populations of southwestern pond turtles. A so-called "sag pond" on the San Andreas fault, the lake is usually 1.5 miles long and about 23 feet deep. But with the state staggering through a drought that could last years, half of it has dried up, and where there is water, Shaffer and his research associates estimate it's only a foot or two deep.

With so much of the fresh water lost to evaporation, what's left is highly concentrated with minerals and very salty. And that has left the turtles in bad shape.

The USGS researchers called Shaffer when they noticed that not only were the turtles lethargic, but some of their heads, feet and shells were coated in a thick white crust of mineral deposits.

"Some of them looked like ceramic turtles," Shaffer said. "Between the biologists who were out there and me, we have a hundred years of turtle experience and we had never seen turtles look like this."

So they mobilized, collecting 60 turtles from the arid lakebed and transporting half to the Turtle Conservancy's captive breeding facility in Ojai, and the other half to UCLA, where Shaffer and his team set up a reptile refugee camp on the roof of the botany building.

The turtles were so dehydrated and thirsty for fresh water that they immediately started drinking from their tanks.

They're not the only animals in trouble. Shaffer said that the droughts also have been disastrous for many amphibians, especially those that breed in ponds, pools and streams. Many species, including the endangered tiger salamander, bred little if at all in the past year.

Shaffer estimates the Elizabeth Lake southwestern pond turtle population at somewhere between 300 and 500. The group suffered a blow even before their home starting disappearing, when Shaffer and his team figured out last year that they were genetically different from other turtles further north previously thought to be the same species. In an instant, their purported numbers were cut virtually in half.

Now, a month into their rehab, the turtles are showing progress. They're feeding and gaining weight. And the weather is auspicious. Los Angeles gets almost all of its rain in the winter, and Shaffer is hopeful that if the rain continues as it has been so far, the lake will fill back up and they'll be able to release the turtles back into the wild.

Between the 30 he has and the 30 in Ojai, Shaffer said, "That's a good chunk of the genetic diversity. When the lake recovers we can put them back out and keep the population going."