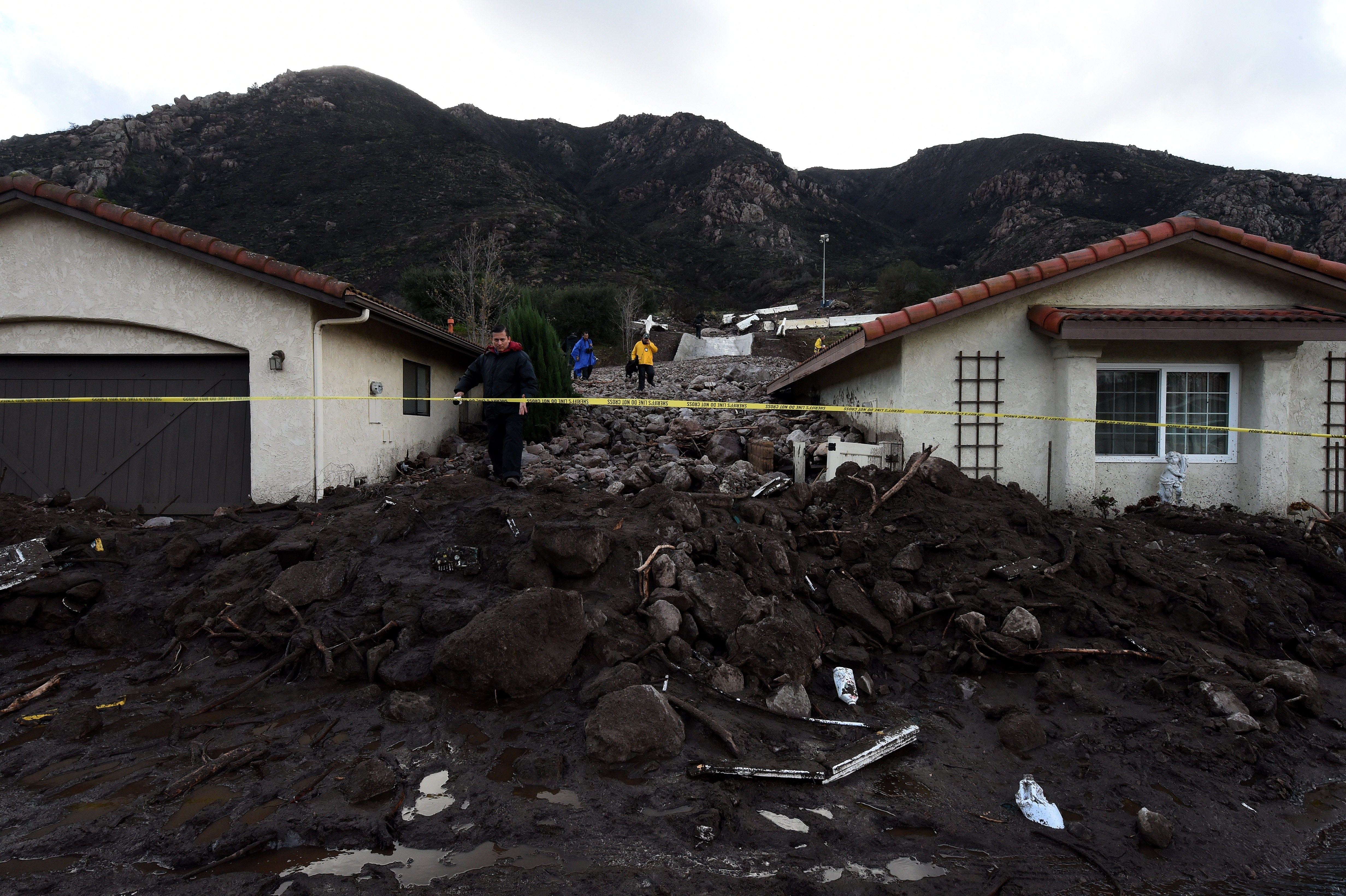 LOS ANGELES -- Californians got a lot of what they wanted and not too much of what they didn't from a major storm that finally blew out of the state Friday.

After drenching Northern California the previous day, the storm dumped up to 5 inches of desperately needed rain in Southern California. A landslide damaged more than a dozen homes and fire officials executed a dramatic rescue of two people from the Los Angeles River.

The storm also touched off a small tornado in South Central Los Angeles and a water spout off the coast of Newport Beach. It caused flooded streets, rock slides and traffic tie-ups in some areas

The tornado, with wind speeds of 65 to 85 mph, struck a south Los Angeles intersection shortly before 9:30 a.m., ripping tiles off roofs, damaging trees and mangling a billboard.

"It got a lot of people excited, but thank goodness nobody was hurt," said Stuart Seto of the National Weather Service.

At the storm's height, about 50,000 customers lost power, though most had it back quickly.

As the storm crept down the coast overnight, its powerful winds caused power outages around Santa Barbara, where the National Weather Service said up to 5 inches fell in coastal mountains. Amtrak suspended service between Los Angeles and the Central Coast city of San Luis Obispo.

In Camarillo, a Ventura County city about 50 miles northwest of Los Angeles, rain was falling at about an inch an hour over hillsides ravaged by a 2013 wildfire. With few roots to hold the soil in place, and a waxy subsurface layer caused by heat from the flames, the deluge caused part of a hillside to give way.

Debris brushed aside concrete barriers crews had set up on the slope and surrounded about a dozen homes with silt, sticks and rocks -- some as large as a couch. The force was so great that two large earthmovers used to set up barriers were swept down to the street, with one nearly buried.

At least 18 homes in Camarillo Springs were red tagged, meaning residents were not allowed back inside, CBS Los Angeles reported. At some house, debris was piled 10 feet high, fire officials said.

"When the door slammed shut I knew there was two feet of mud behind me, and soon the front window blew out, so when the window blew out I knew we had a complete flood of mud and water through the house," resident Bill Golubics, who stayed at his home overnight, told KCBS.

"Wow, are we lucky!" said Ted Elliot, whose house was barely spared.

"We'll be the only house on the block," his wife, Rita, added.

Orange County fire officials and Los Angeles County sheriff's deputies each pulled a body from smaller waterways, though in both cases the cause of death wasn't clear.

Even after the fast-moving storm cleared out, the risk remained that sodden topsoil on wildfire-scarred hillsides could collapse.

A debris flow sent rocks and bricks down streets in suburban Glendora east of Los Angeles, the site of the devastating Colby Fire in January. No injuries or damage to homes were immediately reported.

The threat of slides in several other inland Southern California areas led to some evacuations.

Still, with few exceptions, damage across the region was minor and the soaking was welcome in a state withered by three years of drought. No serious injuries were reported as the storm existed east toward the desert.

Adriana Fletcher, 39, of Huntington Beach, said her 5-, 6- and 7-year-olds were happy to see the rain after learning about the drought in school.

"When it started raining, my kids were like, 'This is so cool,'" Fletcher said.

It was the second major storm in a week for Southern California. Still, weather experts say many more such storms are needed to pull the state out of drought.

The latest storm raised the amount of precipitation in the northern Sierra Nevada mountain range to 18.3 inches, 145 percent of normal for the first two months of the rainy season that began Oct. 1. Still, that's only about a third of the average amount for an entire season, said Maury Roos, chief hydrologist with the state Department of Water Resources.

"It's a nice start. It's certainly not the end," he said.

In the southern Sierra, the drenching only raised precipitation totals to 65 percent of normal for this time of year.

Northern California was hard hit Thursday, with some areas betting up to 10 inches of rain. While the sun rose Friday in a dry San Francisco sky, the storm's affects lingered in the region.

The swollen Russian River in Guerneville reached flood stage by noon. One man used a kayak to survey an RV park where he had removed his vehicle prior to the flooding. A nearby amusement park also flooded. In nearby Forestville, several vineyards were under water. The river finally began receding Friday afternoon.

There was good news: Ski resorts in the northern Sierra Nevada were celebrating up to 3 feet of new snow.