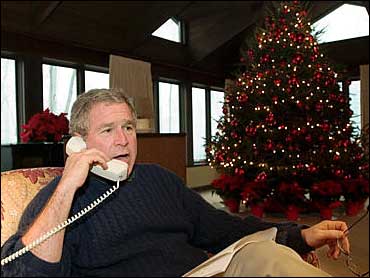 President Bush spent a quiet Christmas with his family at Camp David, exchanging gifts in the morning before a nighttime turkey dinner, a White House spokesman said.

The president was joined by his wife, Laura, and his twin daughters Barbara and Jenna, as well as his parents, former President George H.W. Bush and former first lady Barbara Bush, said spokesman Jim Morrell. He said other family members joined the president, but had no specifics.

The family also had dinner together on Christmas Eve and attended an evening candlelight service.

The president's family had a Christmas dinner of green salad, roasted turkey and gravy with cornbread dressing, green beans, mashed potatoes and dessert of pumpkin and pecan pie, Morrell said.

The last time the president invited his parents to a holiday dinner — in Crawford, Texas for Thanksgiving — he missed the dinner because he flew to Baghdad in a secretive visit to U.S. troops there.