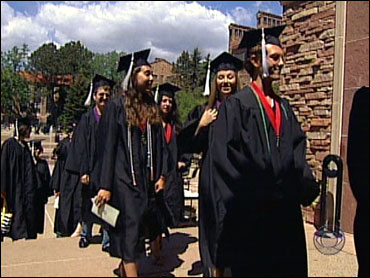 First I would like to thank the school's president for inviting me here this afternoon. I'd also like to thank Ron Popeil for his late cancellation, thus allowing me the opportunity to speak to you today.

To be honest, I thought Mr. Popeil was dead, so it was glad to hear he's healthy enough to make the rain date of a charity golf event to find a cure for eczema.

I would also like to congratulate all the graduates of the class of 2007. Cherish that degree in your hand, and when you sober up tomorrow or the next day, roll it up and stick it in the furthest recess in your parents' attic. It's just another symbol, a score sheet that our elitist society will use to process you like a ball of mushy meat scraps at an Oscar Mayer factory and drop you face down in a pre-selected pigeon hole.

So you're entering this next phase of your lives with a clear disadvantage. But don't let that distract you from your goals in life. You've probably heard the new-age mantra, "Do what you love and the money will follow." That's a lie. (If it were true I'd still be a community theater actor in Alaska delivering pizzas to strip joints for a guy named Guido.) Your best bet is to look for a job that doesn't make you violently ill and pays enough to keep your mounting credit card debt from crushing you.

But if you're still determined to climb your way out of the warm and suffocating sea of mediocrity, there is one path to success for someone of your social status: kiss a lot of ass. Everyday in firms and factories all over the world, coworkers are droning on about that one office brown-noser who's always sucking up to corporate. Most of those conversations end with some form of, "And can you believe I have to answer to that overpaid twit?" You need to ask yourself: Would I rather be underpaid or under-appreciated?

Many of you may not be able to find even a dead-end job right away. And to you I say enjoy being unemployed, while you're young. I got laid off once and I spent the entire time worrying about getting a job. After seven weeks, and more than 100 resumes I was hired back with the same company. I later realized my resume had the wrong phone number on it. I wasted all that time when I could've been hanging out in some trendy dive bar all day chatting up other dot-com deadbeats about the good old days of complimentary back rubs, acupuncture and office bong parties.

I can see by your faces this is coming as a shock to some of you. You've just spent a good part of your adult life discovering new things, new talents you never thought you had, making friendships and memories. And you may not want it to end. But it has to — it's inevitable — especially the friendships.

Those lifelong bonds you think you've created are really socially stunted, emotional crutches used to cope with your suppressed home sickness. I know it's hard to hear but trust me, end them now. If you don't, in 10 years you'll catch a glimpse of yourself in a mirror at 5 a.m. on a Monday morning with your tie wrapped around your head playing beer pong with an old frat buddy and two girls he picked up from the local for-profit technical institute, and you'll think: Why am I still friends with this guy? And guess what? He'll be thinking the same thing.

Also, if in 10 years you get a message from that girl who dumped you your junior year for some hippie banjo player who always had the "killer weed" at his off-campus apartment, saying she desperately needs to talk to you — do not call her back! She's just looking for you to play daddy to her four kids from her two failed marriages. And don't be fooled by her empty promises of kinky sex.

I may have said too much. I hope this helps you as you embark on your journey toward the American dream. I have to go now; I have to put more quarters in the meter. But I have a lot more to say, so you're welcome to join me at my car. I have a pony keg in my hatchback. Please bring your own cups.

Mike Wuebben has written several non-published works, including angry e-mails to former girlfriends and at least three book reports on the Judy Blume classic, "Tales of a Fourth-Grade Nothing." Prior to that, he couldn't read or write.

If you really want to talk, send Mike an e-mail. If it's urgent, buy an industrial-size spotlight with a W stencil and shine it into the night sky. Mike looks up regularly to check his messages.