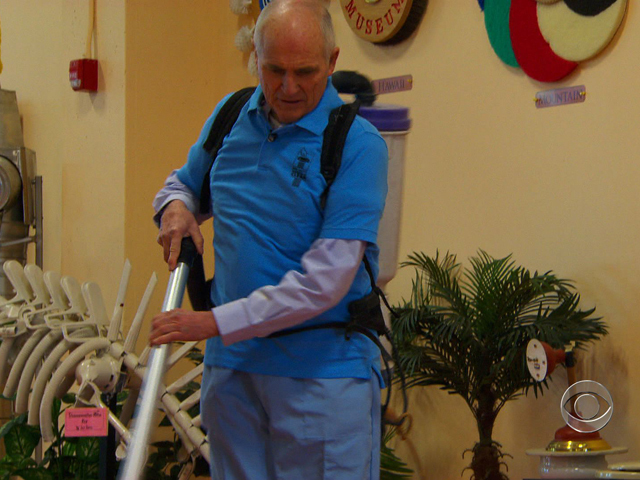 (CBS News) POCATELLO, Idaho - Among the tourist attractions in Pocatello, Idaho are a zoo, a natural history museum, and a performing arts center. But what got CBS News correspondent Steve Hartman's attention is a cultural exhibition you won't find anywhere else on the road.

Hard to believe: 17,000 museums in America and until now, no one ever thought to build this one -- the most important one.

"There are plane museums, train museums, hammer museums, cotton museums," said Don Aslett. "What is the most important word in the world besides faith? 'Clean.'"

Yes, he said "clean." Don built, paid for, and now vacuums the world's first museum dedicated to the history and promotion of cleaning.

It's an acre of old brooms, dustpans, everything under the suds. And surprisingly, unlike many of the exhibits, this museum doesn't suck wind.

Here, Don demonstrated a rocking chair vacuum. "One of the most unique ones is the guy sit in the chair..."

"You went back and forth like this and the woman vacuums," Don explained as he sat down on the chair and showed how it worked.

Unfortunately, others are less amused like this group of young kids visiting the museum.

"This is a cleaning museum. Everybody really loves to clean, right?" he said to them.

A bit of silence follows. A homework museum would go over better.

So why bother? For Don it's a mission that began almost 60 years ago. In college, he started Varsity house cleaning -- a single-truck business that eventually grew into $250-million-a-year company.

And along the way, he says he learned something about people -- that cleanliness carries over into all aspects of your life.

"I'm not really the cleaning type.  I'm kind of the lazy type," said a kid.

But Don said if you just show kids how rewarding and fun cleaning can be, all that negativity will come out in the wash. In fact, he's bet $6 million on it.

"Safe to say you put your life savings into this?" Hartman asked Don.

"You did? You spent every penny on this?"

Fortunately for Don, it's actually working. At least judging from the class Hartman invited to his museum. They got swept up in it.

"It makes me think that cleaning is really fun," said a youngster.

A lot of the kids told Hartman they like cleaning now.

Hartmann said to one kid: "I'm going to call your mother and say, 'Oh, your daughter, she wants to clean.' Can I have your phone number so I can call your mom?"

Now if we can just get a truth museum.