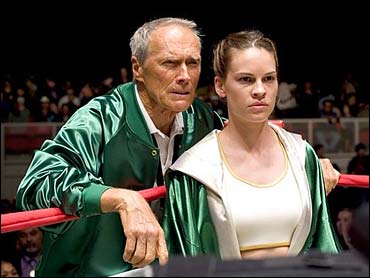 This column from The Weekly Standard was written by Wesley J. Smith

If Academy Awards were given for the greatest lost opportunity, "Million Dollar Baby" would have won them, too.

As anyone who has been paying attention to the ruckus mounted ably and righteously by the disability rights community must now know, the movie climaxes with Frankie, Clint Eastwood's character, euthanizing the once indomitable Maggie, his boxing protégé, played by Hillary Swank.

Frankie kills Maggie because she doesn't want to go on living after being catastrophically injured and disabled in a boxing match. It isn't just the disability that leads to her suicidal desire. In the world of the script, she is plunged headlong from triumph to utter hopelessness. Indeed, the script writers manipulate the audience emotionally into thinking, "Of course she wants to die. Given the same situation, who wouldn't?"

First, Maggie becomes a ventilator-dependent quadriplegic, after once living a life of utter physicality. That would be difficult to adjust to even under ideal circumstances. But Maggie's life as a disabled woman is anything but ideal. Despite supposedly receiving the best of care she soon develops bed sores so serious that one of her legs is amputated. (Apparently the writers didn't know that proper medical care prevents most bed sores.) Third, her venal and uncaring family refuses to visit, and when they do, she is pressured into signing over control of her assets. Fourthly, after trying to kill herself in a terribly painful way, she is force-sedated to prevent further suicide attempts.

Frankie is in anguish over his friend's plight and concludes that he is actually killing Maggie by letting her live. So, in his love for her, he overcomes his Catholic guilt and murders Maggie by removing the respirator and injecting her with an overdose of adrenalin. The intent, of course, is to leave not a dry eye in the house.

The makers of "Million Dollar Baby" and the Academy members who voted it Best Picture probably believe the film was innovative and courageous. But depicting mercy killing as compassionate and loving has been used as a plot devise so often that it has become a cliché. Indeed, not only have most contemporary television dramas -- "ER," "Law & Order," even "Star Trek Voyager" -- resorted to mercy killing as a plot point, but so did "The Sea Inside," the Spanish movie Academy members voted this year's Best Foreign Film.

Nor is this a story line of recent vintage. Indeed, in the past movies were made as explicit propaganda to promote the legalization and legitimacy of active euthanasia. The most notorious of these is the 1939 German movie, "I Accuse" (Ich Klage An), a film that, with Goebbles's blessing, both promoted voluntary euthanasia as well as the propriety of killing disabled infants -- to blockbuster success at the box office.

It is striking and disturbing how similar the plotline of "Million Dollar Baby" is to the voluntary euthanasia story in "I Accuse." In both, the tragic and doomed heroine is a very talented and independent woman; a boxer and brilliant pianist respectively. In both, the heroine becomes seriously disabled and unable to pursue her life's dream. (In "I Accuse," the heroine contracts multiple sclerosis and loses her ability to play piano and fears becoming a quadriplegic. In "Million Dollar Baby," the heroine's neck is broken, resulting in quadriplegia.). Both heroines beg their primary male companions (the husband in "I Accuse" and surrogate father in "Million Dollar Baby") to put them out of their misery. Both men initially resist weakly but come to see that killing their beloved is the only way to avoiding pointless suffering.

The primary difference between the two movies is that "I Accuse" ends with the husband righteously defending himself in the dock against criminal charges, pointing an accusing finger at the camera proclaiming, "I accuse!" at society for not permitting the compassionate and purely voluntary ending of lives no longer worth living. In "Million Dollar Baby," Frankie is devastated by what he has done and disappears, never to be heard from again. Nevertheless, the message of the rightness of mercy killing is more than implied: Frankie's act is depicted as heroic by the film's narrator, played by Morgan Freeman.

Clint Eastwood has stated adamantly that he did not intend "Million Dollar Baby" as a showpiece for legalizing euthanasia -- and I believe him. Rather than pushing an agenda, it seems to me that Eastwood -- like so many others in Hollywood before him -- merely saw the mercy killing angle as good drama; particularly when combined with Frankie's conflicted Catholicism.

Whatever the case, the bigger sin of the movie is its peddling of dangerous ignorance. For example, the movie depicts Maggie as a mere slave to medical protocols. In reality, she would have had the legal right to refuse medical treatment -- even if it meant that she would die. Thus, she could have ordered her respirator turned off. Indeed, given today's increasing utilitarianist tendencies in health care, bioethicists, social workers, and doctors involved with her care might well have repeatedly reminded her of that fact (hint, hint).

Secondly, while it is true that many people who become quadriplegic later in life become very depressed and suicidal -- like Maggie in the movie -- studies show that such existential despair is not usually permanent. Indeed, one medical report published several years ago found that the level of depression in people disabled later in life to be no different five years post-injury than that found among the able bodied. Moreover, people suffering the emotional agony that Maggie experienced in the film can be treated for their depression and their suicides prevented -- without being force-sedated.

The most important point omitted from the film is that people with quadriplegia, when they are not merely warehoused in a nursing home, live very rich and satisfying lives. That Eastwood never seems to have given this matter any thought is odd, given that Christopher Reeve demonstrated famously that becoming quadriplegic does not mean that meaningful life ends. Similarly, Joni Erickson Tada became a world famous artist, disability rights activist, and Christian apologist after becoming near-quadriplegic. Meanwhile, every day tens of thousands of our disabled brothers and sisters lead meritorious and productive lives, aided by respirators and wheelchairs that come to be seen not as dignity-robbing impediments, but facilitators and tools of independent living.

Hollywood is not known for deep thinking about such matters, so it probably never occurred to "Million Dollar Baby's" creators to include this element in the picture. Too bad. Just think about the inspiration the movie could have delivered about the indefatigability of the human spirit, instead of its dark and ultimately defeatist death message.

Rather than allowing Maggie to surrender in bleak despair, Frankie could have instead boosted her confidence, just as he did when she was boxing. He could have brought other disabled people to see Maggie whose lives would have illustrated the rich possibilities for living amidst even the most difficult disabilities. Frankie could have talked her through the months of grueling physical therapy and given her the quiet strength to confront her venal parents. Maggie might not believe in herself anymore, Eastwood's Frankie could have barked, but he'd be damned if she could ever make him stop believing in her!

The movie could have ended with Maggie triumphing once again, perhaps having obtained an education and becoming a teacher; or, opening a business managing boxers; or perhaps, receiving a standing ovation as an inspirational speaker. Not only would the ending have been happier and truly uplifting, but it would also have been more consistent with the internal strength of "Million Dollar Baby's" characters.

Too bad Clint Eastwood was blind to the true potential of his story. Instead of allowing Maggie to be a true champion, he simply chose the easy way out.

Wesley J. Smith is an attorney for the International Task Force on Euthanasia and Assisted Suicide.