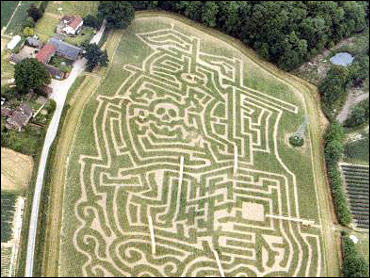 "Get lost" might be the only two words needed to introduce this next item. It's about the latest craze in family days out, and a new twist on an old idea. And it's a-maze-ing, as CBS News Correspondent Mark Phillips interviews the man behind this worldwide passion.

This is a simple story about confusion, in a place where getting lost is part of the fun.

A cornfield in southern England may look like your average cornfield, until you find the flag. Adrian Fisher is under this one, tromping through one of the 90 cornfield mazes he's designed this year around the the world.

"We are now living in the golden age of mazes," Fisher says. "With innovations that are more fantastic by the year than ever before."

Mazes had an earlier golden age. For centuries, elaborate ornamental hedge mazes were installed by the wealthy and powerful to enhance their properties and impress their friends.

Firsher explains, "In the 16th and 17th centuries, it was really if you were a king or a prince and had a really fantastic garden and a castle, you put a maze in to entertain your guests."

But then Fisher, who had a small business designing formal mazes, was approached by an American who thought all those cornfields he'd been flying over could be put to a second use. So did Fisher.

Fisher says, "We got together in Pennsylvania, and we created the world's first-ever corn maze. And it was terrific. We had 6,000 people through in two days, and we thought, 'We're on to something here.'"

Build it and they will come.

"And they did," Fisher says.

They came in America, and they're still coming around the world. Out of hedges, out of corn, out of mirrors, Fisher has now built more than 400 mazes in 21 countries. The attraction may be the simplicity of finding your way, under your own power, using your own brain.

Fisher notes, "A roller coaster and a flume ride will give you a great number of G-forces and thrills, but the only decision you make is to stand in line for 28 minutes and then be strapped in. Here, you're making choices all the time.

Fisher says, "If you make a wrong choice, you can be on the paradise trail for the rest of your lives."

If you get hopelessly lost, you can wave the flag you're given and get rescued, or you can refer to a sealed map, but that's cheating.

Beyond the fun, there's another puzzle these mazes solve: How to keep farmers in business during a time of falling prices.

These mazes have magical properties as well. They can turn a cornfield into a gold mine.

Fisher says, "The farmer's going to make about 25 times as much per acre if he runs it as a corn maze, compared with treating it as a regular crop to sow, harvest and clear."

And then he gets to sell the corn.

"Well, OK then, 26 times when he sells the corn," Fisher says laughing. These days, he is laughing all the way to the bank - if he can find it.

Walking through the maze, Fisher and Phillips face another choice: go one way, or another."