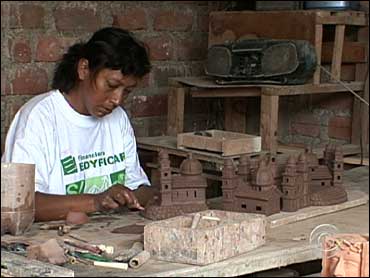 If someone loaned you $100, maybe it wouldn't change your life. But in many countries, it could be the difference between prosperity and poverty.

Tiny loans like these are called micro-financing. And last year, some $36 billion of them went to more than 99 million borrowers, as CBS News technology correspondent Daniel Sieberg reports.

With a new apartment in Harlem, 29-year-old urban planner Justin Moore doesn't have a lot to invest. But through a YouTube video, Justin learned how he could help the poor -- and his bank account.

The video was from Opportunity International. Opportunity clients use these financial services to start or expand a business.

"If I'm gonna have my money someplace, it might as well be someplace it's doing some good," Moore said.

On MicroPlace.com, Justin invested $1,500 in several different funds. He could select where his money went - in this case, to women borrowers in Peru.

Once Justin clicked on the "Invest Now" button, his money left Harlem and was transferred to purchase a security with Calvert Foundation Investments. Calvert bundled the money with other investments, sending a portion to a micro-lender named Edyficar, in Lima, Peru.

Finally, Justin's dollars ended up in the town of Villa El Salvador, 3,600 miles from his New York apartment, and into the hands of Paulina Atahja.

In her dusty, hillside home, Paulina's pottery business was struggling. She needed more clay, better paint and professional brushes. After 10 loans totaling less than $10,000, Paulina not only has better equipment, she's hired six neighbors and relatives and her production has tripled.

Paulina's traditional bulls, which legend says bring financial prosperity, sell in craft markets across Peru, for $5 to $10 a piece.

She says she doesn't know where she'd be without the loans.

"Perhaps be unemployed," she said. "I really don't know."

"Without this loan my son would not have been able to attend college," she said, sobbing.

Globally, women like Paulina make up 85 percent of micro-borrowers. They're considered a better risk and their repayment rates average 97 percent.

The average investor gives about $300, says Ashwini Narayanan, the general manager of MicroPlace, where Justin invested. Microplace is now offering real investment returns of between 2 to 6 percent, on par with commercial banks.

"People are hungry for the ability to somehow put their values into action, right? You know, 'I feel this way. I want to make a difference in the world. I want to have the tools that will help me make that impact in an effective way,'" Narayanan said.

When we showed Paulina a message from Justin, she was stunned that her benefactor was so young, and middle class. She asked us to give him two of her favorite works.

Justin's investment matures next year, on track to earn him about $45, 3 percent of his original $1,500 - proving that, while micro means small, it's by no means insignificant.