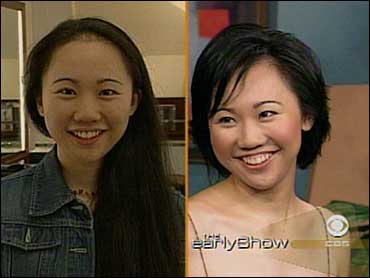 If you were going to cut your hair for the first time in 20 years, would you do it on national television? Well, The Early Show's stylist David Evangelista, convinced Monday morning's makeover recipient to do just that.

Yoko Fujii is a 25-year-old, who works in event management with the New York Breast Cancer 3 Day Walk. To say that she is a woman in flux is an understatement. Recently, Yoko went down four dress sizes and now she is going to cut off her hair. It's hair that has not seen a scissor in 20 years. She celebrated her 25th birthday July 1.

Yoko has decided that now is the time to say "toodles" to her insanely long mane, and Monday morning, David will give her a new, stylish, liberating 'do. Later this summer, Yoko will be walking Chicago's Breast Cancer 3 Day (which is walking 60 miles in three days.) Her new haircut will be a lot easier to handle in the Chicago heat than a long, flowing mane.

Working with breast cancer patients, survivors, and their friends and families, Yoko was inspired to give something back to them. "I have received so much love from the community," she says, "they've inspired me so much, and I thought to myself, 'I could do more to give back to them.' So I've decided to donate my hair to the Locks of Love organization so I can give back to at least one more person."

A few weeks ago, Yoko decided it was time to cut off her hair. Her hair is actually taller than she is. She is 5 feet 5 inches tall, and she says she can stand on at least 5 inches of her hair. That means her hair length is closing in on 6 feet.

At the recommendation of friends, Yoko visited several Manhattan salons to find a stylist to transform her. When she visited the John Barrett Salon at Bergdorf Goodman, she found herself in David Evangelista's chair. David convinced Yoko to wait a few weeks to get her transformation live on The Early Show.

The cutting of Yoko's hair has turned into something of a global event; she has lived in various countries, and after sending out an email to her international friends, alerting them of this momentous happening, she has learned that people in Japan, Russia, England, New Zealand and Canada are thinking about coming to New York to see her transformation, or trying to get a satellite hookup of CBS for the day. At a minimum, Yoko will be accompanied Monday morning by her mother, Noriko; her older brother, Shiho, and her younger brother, Yuji.

In addition to a new haircut, Yoko will have her makeup done by makeup artist Dana Ornstein and get a new outfit from Dominica at Bergdorf Goodman.