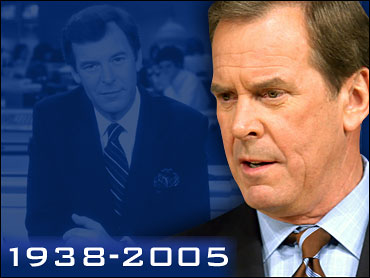 Finally today, in an awful week, the one thing that made a lot of people I know feel a little better was, of all things, a funeral, or to be more accurate, a memorial service for my friend Peter Jennings, because it wasn't the usual memorial service.

Peter's wife Kayce saw to it that the 2,200 people who came to Carnegie Hall were treated to a great show. And from the Royal Canadian Mountie Honor Guard to the New York Police Department bagpiper who started it to Yo-Yo Ma and Wynton Marsalis and the Gates of Praise Choir that brought us all to our feet at the end, it was just that, a wonderful show.

It made us all think of Peter because he loved a good show. And in the ultimate sign of respect in today's modern world, the crowd actually turned off their cell phones and listened. I only heard one ringing. And it made me grin because I know Peter would have noticed.

And there was another rarity. The people who gave the eulogies passed up the chance to talk about themselves and actually talked about Peter. And there were none of the usual bromides about Peter's commitment to a free press. With Peter, that was a given. Instead the speeches were very personal. His friends talked about his work with the homeless, his fondness for kids, and his relationship with his own son and daughter. His son Chris said, "There is no way to express how much I miss my father. Each day is, above all, a day without him."

Peter rose to the top of his profession and won every prize you can win. But as I heard that young man speak, I wondered if anything Peter had ever achieved would have made him prouder than to hear his son say those words. I think not. And that is what made Peter Jennings worth knowing. I'm proud I did.