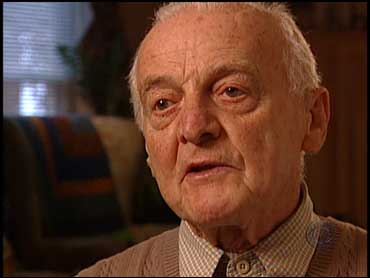 At a ceremonial dinner at New Jersey's St. Augustine College Preparatory School, everyone complied with the dress request for coat and tie.

Everyone but Paul Navone.

Navone, 78, showed up in a sweater he'd bought at the Salvation Army for $3.

"Everything I had on was from a thrift shop. As it is where I'm sitting right here now," Navone says.

So begins the story of the unlikely philanthropist.

Navone was born dirt poor and never made more than $11 an hour. He put in 50 years at the glass factories in Millville, New Jersey, working all the overtime he could get.

"I saved. Why would I go home?" Navone asked CBS News correspondent Steve Hartman. "I didn't have a life."

He didn't have a wife or children or a phone or a television. All of which are reasons he was able to save most of his paycheck and let it grow.

"Different people have asked me, 'What were you saving for?' Really, never in my life did I save for a specific purpose," says Navone.

Until, at 78, he finally gave it some thought. He drove over to the local Catholic high school where they were trying to raise money for a swimming pool - and made a huge splash.

As a result of all the compounding interest, Navone was able to donate a million dollars for what is now the Navone Pool.

He also gave another million dollars to Cumberland County College for their new nursing education program.

Paul says that it feels good to be rid of those savings -- perhaps because after all these years he figured out what he'd been saving for.

"What I invested in is enriching people's lives," says Navone.