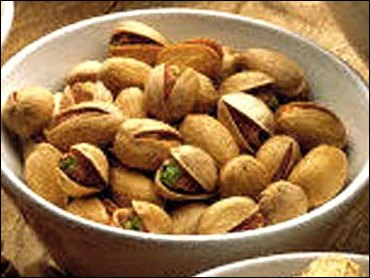 I was absent-mindedly walking back to my desk when it hit me. They weren't coming. No pistachios. I panicked. I got sad.

By the time I sat back down I was braced for action. I called directory assistance for area code 847 and got the number of the Ross Nut Co. of Northbrook, Illinois. Family owned since 1952.

A gentle, elderly-sounding woman answered and said, yes, she could answer questions about an order. Even strange ones.

So I began explaining to her that every year since the beginning of time, my grandmother sent pistachios from the Ross Nut Co. to all her relatives. But she had died in May and I was concerned that this would be a Christmas without pistachios.

I have no recollection of a Thanksgiving to Christmas season without Fancy Colossal Pistachios from the Ross Nut Co. For years they came in a very substantial white board box, with a tin top, red design, and black letters. You had to pry an oval lid off with a can opener or an at-risk thumbnail. That was when we still lived with our parents. Eventually, the boxes were replaced with heavyweight paper cartons. Now my own children have no recollection of a December without pistachios.

I was about to ask the nice lady if I could replicate Amah's pistachio list when she giggled. Just a little. But a definite, audible giggle.

The apparent rudeness surprised me to the point of stuttering, but she apologized before I could get a sentence out. It was just that I was the fifth or sixth person from Mrs. Gutmann's family to call with the same query, she explained. Was I the grandson in Washington or one of the Arizona ones perhaps? Washington, I said a little sheepishly.

The lady on the phone - I like to think of her as Mrs. Ross, but didn't ask - went on about how nice it was to hear from all of us, how sentimental we all seemed. She said I was more than welcome to order some pistachios but that it was possible, just possible, that some might have been ordered already. She would say no more. Sworn to secrecy.

By this time I was nearly blubbering. I hung up without ordering, amazed at my grandmother's living legacy.

Until her very last week, in her 96th year, a phone call to Amah was a phone call to the entire family. One by one she would fill me in on my cousins, my nieces and nephews, sometimes my own brother and sisters. She did the same for all the others, day after day, week after week. Her recall was total. She had 10 grandchildren, 18 great-grandchildren, and two great-great grandchildren. She knew everything about all of us.

Now we get our family news from this - a computer screen. E-mail. Address groups. We've discussed having an Amah Web site, half-seriously. I think we should ask Mrs. Ross if she's interested in being the acting matriarch and information clearinghouse. I guess she'd think we're nuts.

The Internet works pretty well, though, so far. It's not Amah, but without it I think we'd be way out of touch. All the trivial stuff still gets passed around; and that's vital.

The first pistachios to arrive were from my oldest sister. But they were from someplace in New Mexico, not from the Ross Nut Co. She's trying hard to get us used to change, with baby steps.

Then the real thing came. Two pounds of Colossals, lightly salted. Each one amazingly plump, a tinge of green, easy to open. Like always.

The thank you notes are in the e-mail.

I wrote this column in 1999. Maybe it's selfish of me to run it again, but I doubt I'll ever have a more meaningful Christmas message. The Fancy Colossals are still coming, of course. But this year, I gave ours to my father-in-law.