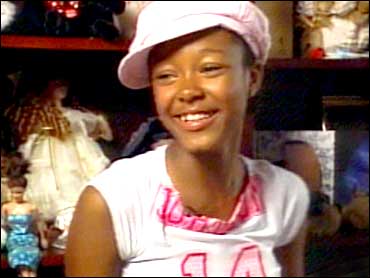 At 12, Gerren Taylor is a model student, but at nearly 6-feet tall, she's also a runway model.

The Early Show national correspondent Hattie Kauffman visited Gerren at her home in Los Angeles, where she has become the talk of the catwalks.

"[Gerren] has the height. She has the walk. And she look natural fresh and beautiful," said Heinz Holba, president and owner of L.A. Models.

Draped in dazzling designer gowns, Gerren Taylor is making her move in the modeling world. She is already being called a potential supermodel and being compared with Naomi Campbell.

Gerren was spotted by a talent scout in Los Angeles Park, and is the youngest girl ever signed by the runway division of L.A. Models.

"Every once in a while … you meet someone and they just get it," said L.A. Models Runway Division Crista Klayman.

But even Gerren is amazed at the transformation once makeup artists and hair designers are done making her look mature.

While most runway models are in their 20s, some of the hottest models achieved superstar status while still in their teens. And while the dangers of anorexia and drug use among models are well documented, Gerren now would rather play with her dog and dolls.

The agency has tried to hide her age from clients.

Gerren explained she tries to keep quiet about her age by staying with friends and her mother.

But once she hits the runway, Gerren walks like a grownup.

"When I'm walking down the runway, I feel confident," said Gerren. "And I watch my step and just explore."

In one fashion show, a wedding dress was put on backwards by accident, causing Gerren to trip over the train. But she kept her composure and continued to walk.

Unlike some other models, Gerren said she is not worried about gaining weight.

Gerren's mother is always with her, making sure she's not wearing anything too sheer or sexy. That's a lesson she learned after briefly leaving one photo shoot.

"I left the room. I was confident because other mothers were there, and some of the pictures [taken] were a little bit much for my 12-year-old," said Gerren's mother Michele Gerren. "I pulled them from the book. I told the agent I didn't want her portrayed in that way."

Gerren said she wouldn't let success go to her head.

Michele Gerren makes sure her schoolwork always come first, but with young models that's not always the case.

Gerren's story has raised much debate about how a girl's life is affected, for better or worse, when she is asked to model and act as an adult.

Cosmo Girl magazine's Editor-in-Chief Atoosa Rubenstein and Kay Hymowitz, author of "Ready or Not: What Happens When We Treat Children as Small Adults," paid a visit to The Early Show Tuesday to discuss the benefits and dangers of young girls strutting the catwalk alongside older women.

Rubenstein says she is completely in favor of young girls modeling, as long as they are well parented. In fact, she thinks modeling is one of the best career moves a young girl can make.

On the other side of the issue, Hymowitz says innocence is lost when young girls model. The end result, according to her, is not healthy. Hymowitz says, in some serious cases, it can even lead to eating disorders and the sexualization of young girls.

Hymowitz says modeling encourages kids to grow up too quickly. She says another problem is that it adds to kids' obsessions with the way they look and adds to the problem of growing up in a society dedicated to bodily perfection and sex appeal.

Rubenstein says she edits a magazine that is meant to empower girls and not exploit them. But Rubenstein does say young models have to have strong responsible parents that look for their daughter's best well-being.

The benefits of modeling, Rubenstein says, is it can provide financial revenue and a career for the girls, which makes the models learn about saving, finance and structure. And, she says, the modeling industry does have good people who do not fit the drug-sex stereotypes.

Rubenstein says there are dangers in the world, but young models who work for an established agency with a long-standing reputation will be safe. She explains it is important for the young girls to work with professionals who would not be in the business if they allowed terrible things to happen to the models.