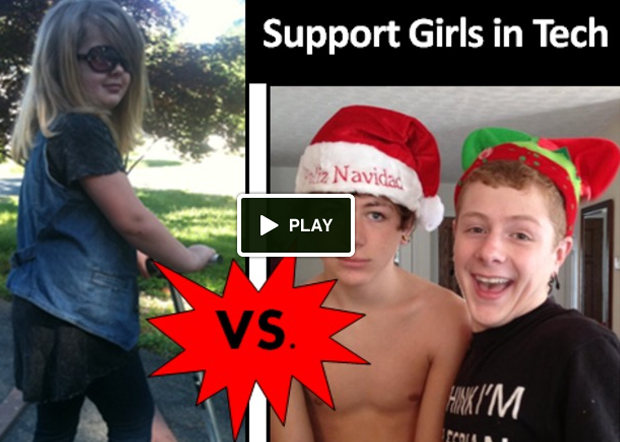 A 9-year-old girl who wanted to learn how to build a video game turned to the popular crowdfunding site Kickstarter last week to raise funds to attend a programming camp to learn how to buil a game. But instead of meeting the $829 goal, her project raised over $21,000 -- plus allegations that her mother exploited her gender to fund a project that she could have afforded on her own.

Maryland mom Susan Wilson helped create the Kickstarter project to send her 9-year-old daughter Mackenzie to a camp for kids to learn how to create a role-playing game (RPG). According to Wilson, her sons had teased their sister, saying that she could not build her own video game.

"Her brothers said that it was a waste of money sending her to camp," Wilson told CBS News over the phone. So she asked her daughter how she would earn the money on her own. That's where Kickstarter entered the picture. The plea to potential funders was to help prove that a young girl could build her own RPG and pay for it.

The Kickstarter community was so responsive to Mackenzie's plea that the $829 goal was surpassed quickly - as of this writing, it's at $21,602. But questions about Wilson's background popped up in several online communities, including video game blogs and Reddit.com.

Several links were posted to a Reddit sub-section called Men's Rights claiming that Wilson was a millionaire manipulating the Kickstarter community by using her daughter's gender to exploit the lack of women in technology.

Wilson was the CEO of The Judgement Group for eight years and was listed as one of the Top 10 most powerful female entrepreneurs by Fortune magazine in 2009. Online, some pointed out that Wilson could well afford the camp's $829 fee.

So was Mackenzie's campaign a ploy to scam the Kickstarter community out of money?

"There was no grand plan. This was an $829 campaign; it was like a craft party on the weekends. I didn't think about the implications, I didn't think beyond that," Wilson said.

It isn't just the money that seems to have touched a nerve. The controversy over Wilson's project comes just as the topic of a Silicon Valley gender gap is heating up.

Leading the headlines is "Lean In," Facebook chief operating officer Sheryl Sandberg's book and accompanying movement. Sandberg says she wants more women to sit at the table and raise their hands. And last week, tech evangelist Adria Richards created a firestorm online when she posted a photo of two men at a programming conference who were allegedly making jokes about "dongles" and "forking" in a sexual manner. Ultimately, both Richards and one of the men were fired from their jobs.

"It wasn't intended to be a gender thing," Wilson said, adding that her critics have accused her of vilifying her sons, who are ages 15 and 16. Wilson insists the boy were just acting as siblings and knew they were being jerks to their sister at the time.

"It was one moment in time," Wilson said. "It doesn't mean they're horrible people."

There are also questions of whether or not funding a programming camp broke Kickstarter's terms of service. The crowdfunding site says it did not.

"Kickstarter is a funding platform for creative projects. The goal of this project is to create a video game, which backers are offered for a $10 pledge. On Kickstarter backers ultimately decide the validity and worthiness of a project by whether they decide to fund it," Kickstarter said in a statement.

As for the extra money, Wilson says she has no plans to keep the money and pointed out that people have about 24 days to take back their money. She's reached out to several groups, including game companies and women's technology groups for ideas of how to distribute the additional funds. When a project is overfunded, Kickstarter suggests the creator put the money back into the venture to create something else. In some cases, the crowdfunding site says the creator of the project may collect a profit.

Wilson says that she's gotten about 50 death threats, and has tried her best to shield her children from the media attention. But she hopes there is a silver lining to her story.

"This had only been five days. It's a lot to process in five days. I believe something good is going to come out of this," Wilson said.

Carbon pollution up to 2 million pounds a second
Chenda Ngak