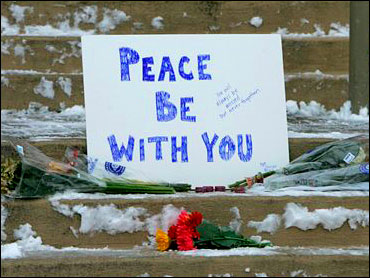 Jodi Longmeyer saw the gunman step off the mall elevator on the third floor. He was dressed in dark clothes. She saw his gun, watched him open fire.

Then she hit the floor.

Robert A. Hawkins' rampage was over in six minutes. But Longmeyer agonized with a 911 operator for almost 30 minutes while barricading herself in an employee locker room at the Von Maur store.

Of the eight people killed in Omaha, six were employees of the Von Maur department store.

"Oh my gosh," she told the dispatcher. "It looks like the gun is lying over by customer service. It looks like he might have killed himself," Longmeyer said as she started to cry.

Her voice cracking, Longmeyer told the police, "I see him lying by the gun. There's blood on the floor. I don't want to look anymore. I'm not looking anymore."

She told CBS' The Early Show that she was out on the floor when she first saw the gunman.

"I only saw him shooting in the air and then he went in behind customer service area," she said. "Then I didn't see anything, but I heard gunshots at that time."

"It was difficult, but I didn't think twice about doing it because I needed to call and get help for the individuals that needed help," she told The Early Show.

As the families of the dead - the eight people killed by Hawkins, and Hawkins himself - struggle with the tragedy, and police move forward in their investigation, studying evidence including over a dozen 911 calls, new details have surfaced about the gunman.

Nebraska officials say Hawkins spent four years in a series of treatment centers, group homes and foster care after threatening to kill his stepmother in 2002.

Finally, in August 2006, social workers, the courts and his father all agreed: It was time for Hawkins to be released - nine months before he turned 19 and would have been required to leave anyway.

The group homes and treatment centers were for youths with substance abuse, mental or behavioral problems. Altogether, the state spent about $265,000 on Hawkins, officials said.

Todd Landry, state director of children and family services, said court records do not show precisely why Hawkins was released. But he said if Hawkins should not have been set free, an official would have raised a red flag.

"It was not a failure of the system to provide appropriate services," Landry said. "If that was an issue, any of the participants in the case would have brought that forward."

After reviewing surveillance tape, a suicide note and Hawkins' last conversations with those close to him, police said they don't know - and may never know - exactly why Hawkins went to the Von Maur store at Westroads Mall and opened fire.

But he clearly planned ahead, walking through the store, exiting, then returning a few minutes later with a gun concealed in a balled-up sweat shirt he was carrying, authorities said.

Police say they have found no connections between the 19-year-old and the six employees and two shoppers he killed. "The shooting victims were randomly selected," as was the location of the shooting, Omaha Police Chief Thomas Warren said.

The mall had received a $45,000 protection plan grant from the Department of Homeland Security two years ago for a number of anti-terror measures, reports CBS News correspondent Dean Reynolds.

Acquaintances say Hawkins was a drug user and had a history of depression. In 2005 and 2006, according to court records, he underwent psychiatric evaluations, the reasons for which Landry would not disclose, citing privacy rules.

In May 2002, he was sent to a treatment center in Waynesville, Mo., after threatening his stepmother. Four months later, a Nebraska court decided Hawkins' problems were serious enough that he should be under state supervision and made him a ward of the state.

He went through a series of institutions in Nebraska as he progressed through the system: months at a treatment center and group home in Omaha in 2003; time in a foster care program and treatment center in 2004 and 2005; then a felony drug-possession charge later in 2005. Landry said the court records do not identify the drug.

The drug charge was eventually dropped, but he was jailed in 2006 for not performing community service as required.

Under state law, Landry said, wards are released when all sides - parents, courts, social workers - agree it is time for them to go. Once Hawkins was set free, he was entirely on his own. He was no longer under state supervision, and was not released into anyone's custody.

"When our role is ended, we try to step out," said Chris Peterson, director of the state Department of Health and Human Services.

About an hour before the shootings, Hawkins called Debora Maruca-Kovac, a woman who with her husband took Hawkins into their home because he had no other place to live. He told her he had written a suicide note, Maruca-Kovac said. In the note, Hawkins wrote that he was "sorry for everything" and would not be a burden on his family anymore.

The aftermath of Wednesday's killings, left some who knew Hawkins questioning if more should have been done.

Hawkins had been staying with the Kovac family. His friend Craig Kovac told The Early Show he felt terrible that he didn't get to talk to his friend and talk him out of the shootings.

Meanwhile, a newspaper report says a 17-year-old high school senior has been arrested on charges of threatening a 16-year-old girl for making Internet postings with unfavorable comments about his best friend: Omaha mall gunman Robert Hawkins.

The Omaha World-Herald says police confiscated two shotguns and a rifle when they went to the home of the 17-year-old, who lives in the same Omaha suburb as did Hawkins: Bellevue, Nebraska.

He is reportedly being held at a juvenile detention center on a charge of making terroristic threats.

A Bellevue man told the newspaper that the 17-year-old had told his daughter that if she said "anything else bad about Robbie" he would "put a cap" in her head - a comment she allegedly captured on her cell phone.

The daughter, who said she used to hang out with the boys, is also quoted as saying that two weeks ago, Hawkins himself threatened to kill her after an incident in which he accused her of stealing things from his car.

She also reportedly claims Hawkins once tried to sell her Valium.

All three teens were students at Papillion-La Vista South High School, although Hawkins had dropped out, in the spring of 2006.