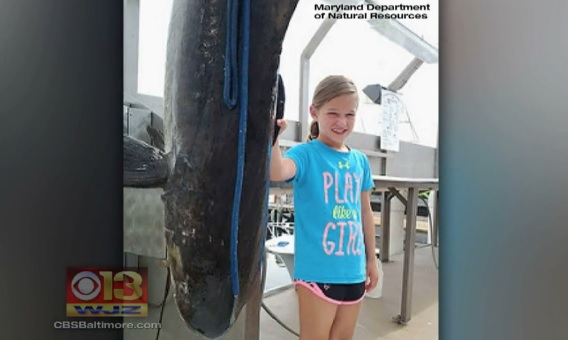 BALTIMORE -- A nine-year-old girl from Maryland has reeled in a record-breaking fish off of Maryland's Eastern Shore, CBS Baltimore reported.

When the family set out for an afternoon fishing trip, they never expected to beat a state record.

Emma Zajdel went fishing with her dad, and pulled a 94 pound fish out of the water.

Zajdel, her father and family friends were about to call it a day fishing on a boat near Assateague Island when they put the rods in one last time.

"We started getting a bite on ours so I got the belt on and Mr. Robert handed me the rod," said Emma.

It was her turn to reel in and they quickly knew it wasn't a small fish.

"At first we thought it was a brown shark or something until it got close, right up alongside the boat," said Ed Zajdel.

That's when they saw it: a massive cobia, bigger than anything Ashton Clarke had ever seen.

The previous state record for a cobia was 79 pounds. Emma's fish is nearly 15 pounds heavier than that.

Now she and Clarke will be back on the water this weekend and they're hoping to reel in another big one.

It took about 20 minutes for Emma to reel in that fish. Her catch may also win the International Game Fish Association Award for biggest fish caught by someone under 10 years old.