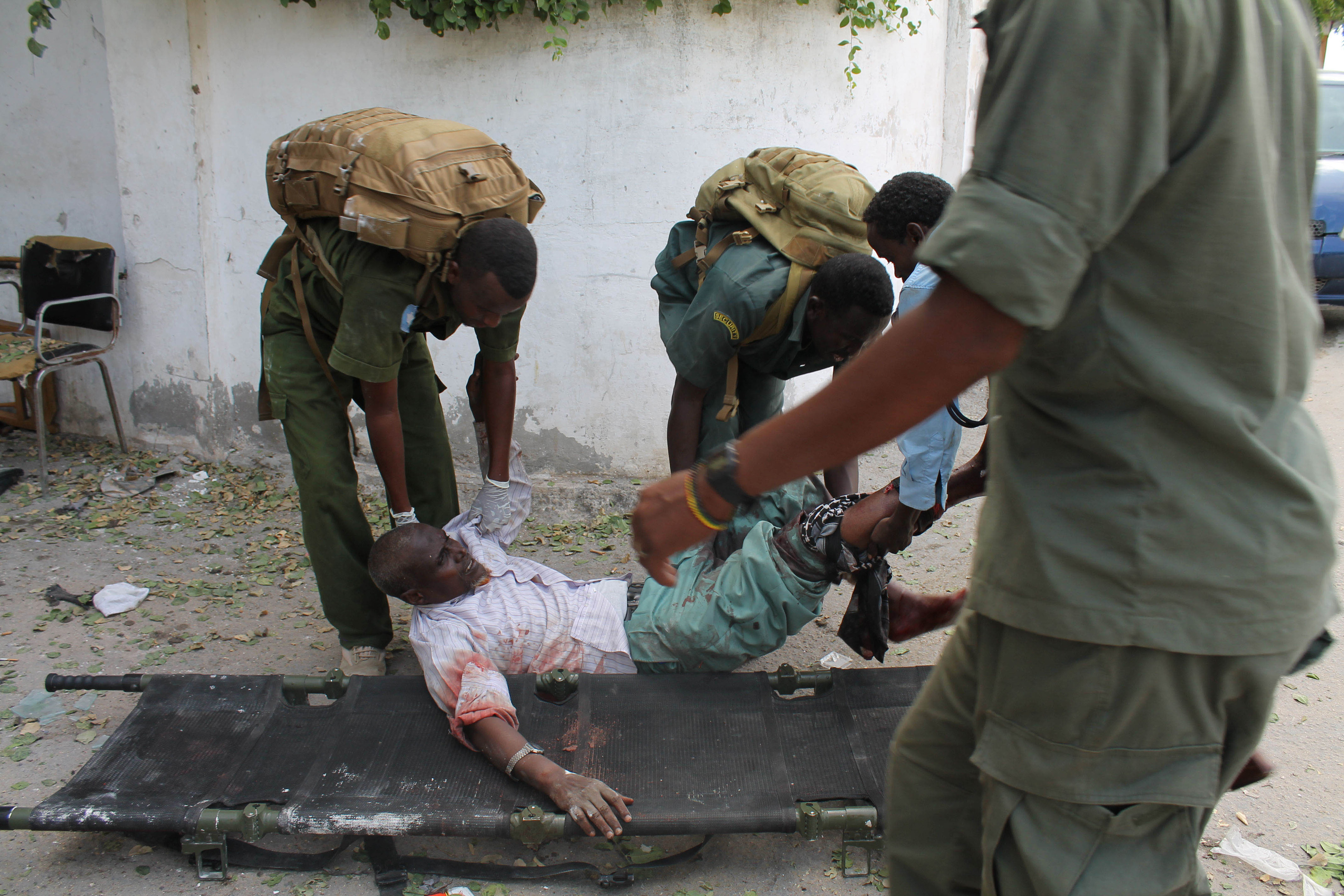 MOGADISHU, Somalia Somalia's interior minister says that nine militants attacked Mogadishu's Supreme Court complex and that all have been killed.

Abdikarim Hussein Guled said that six of the attackers detonated suicide vests and three others were shot and killed during Sunday's assault on the court complex in the Somali capital.

A preliminary death toll stood at 16, including all nine attackers.

The The attack - the most serious in Mogadishu since al-Shabab militants were forced out of the city in August 2011 - lasted several hours and involved running battles with security forces.

No official death toll was immediately released. However, a police officer at the court complex said he saw five dead bodies. Given the amount of gunfire and the length of the shoot-out, though, it appeared likely the death toll would rise. Later, in what appeared to be a secondary attack, two Turkish citizens were killed by a car bomb.

The complex and sustained nature of the assault on the court system suggested militants had laid plans to inflict severe casualties. Sunday's attack was the most serious in Mogadishu since al-Shabab fighters were pushed out of the city in August 2011.

Western officials knew militants had been planning something major. The British Foreign Office on Friday released a travel warning for Somalia that said British officials saw a high threat of terrorism. "We continue to believe that terrorists are in the final stages of planning attacks in Mogadishu," it said.

The attack on the Supreme Court complex began at around 12:30 p.m. and running battles with police and army forces lasted more than two hours. Two bomb blasts were heard and gunmen were seen on a court building roof firing shots, an Associated Press reporter at the scene said. Police officer Hassan Abdulahi said he saw five dead bodies lying at the entrance to the court.

Ugandan troops stationed in Mogadishu as part of the African Union force arrived at the scene and began taking up sniper positions on rooftops.

The Supreme Court was in session and that the court's chief justice may have been the target of the assault, said a Western official who had been speaking to Somali officials. Reports indicated that up to nine attackers - including a half dozen wearing suicide vests - may have carried out the assault, said the official, who spoke on condition he wasn't identified because he wasn't authorized to release the information.

The gunmen took hostages in the complex's main courtroom and forced their way into other rooms in the complex, said another police officer, Abdinasir Nor. The number of hostages wasn't immediately known.

The court complex is a confusing labyrinth of buildings and rooms, allowing for plenty of places to hide but also for many places for gunmen to take hostages. The armed men forced their way inside the complex and immediately set off an explosion, said Yusuf Abdi, who was near the court when the attack happened.

About two hours after the assault began, survivors of the attack began coming out of the court complex. Some were crying and others held their heads in their hands.

"I never expected to make it out alive today," said Halima Geddi, who fled the court complex about two hours after the attack. She said she had taken cover behind an outer wall. "There is no peace. No one protects us. I came to see my boy who was supposed to be tried here."

At about 3 p.m. a suicide car bomber rammed his vehicle into a car carrying Turkish citizens to the airport, said Mohamed Anjeh, a police commander.

Mogadishu's main government center is heavily guarded with multiple security checks. However, the security at the court complex is not nearly as strong. The Ugandan troops who arrived on scene began pushing back on-lookers shortly after the attack began.

Most militant attacks in Mogadishu are blamed on fighters from al-Shabab, the al-Qaida-linked Islamic extremist rebel group in Somalia. Al-Shabab ruled Mogadishu from roughly 2006 until August 2011, when African Union and Somali forces pushed them out of the city. Since then the al-Shabab extremists have launched suicide bombings on the capital city every few weeks.

Despite those intermittent attacks, Mogadishu is generally considered more peaceful today than most of the previous seven years.