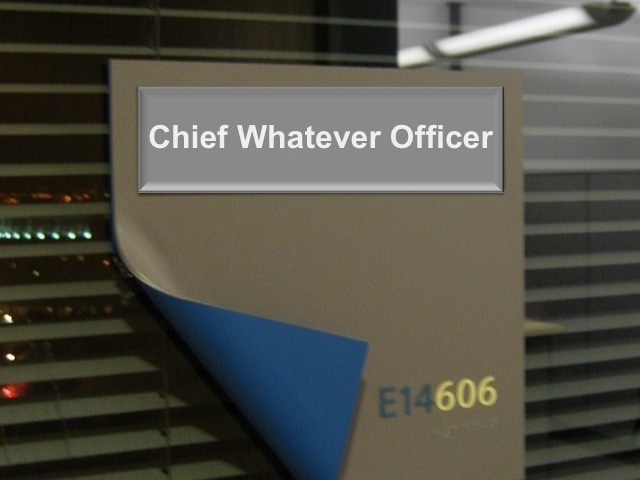 (MoneyWatch) In school we learned about vestigial human organs or structures that once served a purpose but no longer do. While your tonsils, wisdom teeth and appendix can do more harm than good, there are plenty of other parts of the anatomy that are benign, like your tailbone and whatever causes goosebumps.

Likewise, we come across things every day that used to be good for something but are now essentially useless or even downright problematic. We can all do without pennies, paper receipts and the 70,000-page U.S. Tax Code, that's for sure. And 12-ounce cups are worthless in a world where drinks either come in their own container or are supersized.

When it comes to the corporate world, there are all sorts of functions -- mostly high-paying executive jobs -- that are more or less worthless. Maybe they once made sense, but now they're just empty titles or wastes of precious funds that could be put to better use. Here are nine jobs or titles I think the corporate world can and should do without.

President. In corporations, this is a vestigial position if there ever was one. In nearly every case, either the CEO or the chief operating officer is also president. Companies certainly don't need all three. And companies that have divisional or group presidents, that's title inflation or just plain vanity.

Co-CEO or office of the president. It's not bad enough that big company CEOs have too much power and make too much money. Some companies have to have more than one. Why? It's just two mouths to feed and two heads to butt. It just doesn't make any sense. BlackBerry maker Research in Motion used to have co-CEOs. Look how well that turned out. If one couldn't stop the other from destroying the company, then what was the point?

Chief "whatever" Officer. Somewhere along the line, companies went C-crazy. Everyone became a chief "whatever" officer. I call them "nouveau" C executives. First there was technology, marketing and accounting. Then it got even more esoteric: information, strategy, performance, creative, communications, compliance, diversity, and on and on it goes. Sure, some of these functions are important, but the only C-level executives that matter are chief executive, operating and finance officers. Sorry to deflate the rest of you CXOs.

Double wood. It's a bowling term for when a pin is hidden behind another pin. I use it to describe an executive with only one executive reporting to her. That makes her superfluous.

Vice presidents in the banking industry. If you walk into a tiny Wells Fargo branch, I think the person who greets you is a vice president. Last time I checked, Goldman Sachs had about 12,000 VPs and I don't know how many managing directors. That's more than a third of its workforce. Talk about title inflation; that's just plain ridiculous. Apple, the world's most valuable company, has a CEO, a CFO, seven senior vice presidents, and about 70 vice presidents. That's it.

CEO -- of a small business. These days anyone with a Twitter account and a blog is a CEO. It's idiotic. Let me explain something. CEO is a title that refers to an officer of a corporation. If you've got a small business, a sole proprietorship or an LLC, you can call yourself president, owner, managing partner, or Henry, but you're not a CEO. Just annoying.

C-Suite. The term "C-suite" is a media creation. We don't use it in the corporate world. Why not? Simple. Companies are run by a CEO and an executive management team. The implication that a "C" in your title makes you more important than an executive without one is a fallacy. For example, executives who run business units, product development, sales or marketing -- whatever you call them -- are far more important to an organization than any nouveau C executive.

Secretary. No, I'm not talking about corporate secretaries; they're fine. I'm talking about administrative secretaries. I don't know why, but nobody likes that title anymore. Just as flight attendants replaced stewardesses, everyone seems to prefer administrative assistant over secretary, so let's go with that once and for all. Sure, it's semantics, but who am I to judge?

What job functions do you think are vestigial or a waste of precious corporate funds?