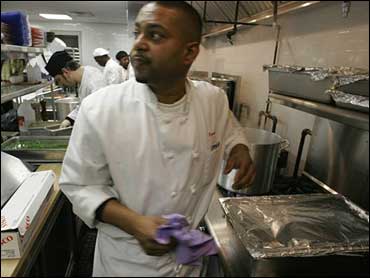 The surviving employees of Windows on the World, the 107th-floor restaurant obliterated in the World Trade Center attacks, have something to celebrate after more than four painful years: a new upscale eatery, just a walk from ground zero.

Colors, to open Thursday in Greenwich Village, is owned by the workers and offers a menu sprinkled with food from the staff's 22 native nations.

It's long-awaited good news for a group who lost 73 of their friends and co-workers Sept. 11, 2001. Only those who weren't working at the time of the attacks survived.

The survivors' livelihoods were crushed. Many have since been unemployed, struggling with odd jobs. Others battled depression and illness.

"After 9/11, the only thing that keeps us going is belief in each other," said Fekkak Mamdouh, 45, a Morrocan-born former Windows waiter. "We can't fail."

At first, the grieving workers considered making their restaurant a sort of tribute to 9/11, including memorabilia. But a survey they commissioned concluded that customers want to enjoy fine food and atmosphere, not be reminded of terror and death.

So they decided on a restaurant with dishes that include favorite family recipes contributed by the workers, whose native lands include Haiti, Jamaica, Italy, Mexico, Thailand, Colombia, Egypt, Bangladesh, China and the U.S.

The eclectic menu will change with the seasons and aims to satisfy both traditional and exotic tastes with fare ranging from organic chicken with cranberries and New York aged ribeye steak to bartender Silverio Moog's Philippine lobster and minted sweet potato spring rolls.

"This is the new American food. It's cooked in a kitchen where everyone is equal, no yelling, no screaming. And you actually own the dishes you're washing," said executive chef Raymond Mohan, born in a village in Guyana.

Among Colors' staff of more than 50, Mohan is one of about a dozen who didn't work at the World Trade Center, but in other restaurants whose business suffered after the attacks.

The Colors waiters, busboys, bartenders, chefs and dishwashers all have a stake in the venture, financed with about $2.2 million. The consortium Good Italian Food offered $500,000 as an equity investment, and the Nonprofit Finance Fund put up $1.2 million for the project from 15 smaller lenders. Modest funds came from Roman Catholic nuns in California, Michigan and Ohio.

"We got nowhere with the big banks," said Bruce G. Herman, a workers rights advocate who represents the Italian consortium. "And who stepped forward? The religious community, a nonprofit fund, a foreign cooperative."

Each Colors staffer also spent at least 100 hours working for the Restaurant Opportunities Center (ROC-NY), a Manhattan cooperative organization that raised another half-million dollars. Its members are teaching other restaurant employees how to build a worker-owned restaurant — an innovative model for the international food industry.

Everyone, even dishwashers, will make at least $13.50 an hour — double the minimum wage and far more than average New York restaurant pay. The workers' 20 percent initial share of the business will increase if they return the investments in the venture.

"Nobody thought we could pull it off on our own as immigrants, as people of color — even the consultants we hired," said attorney Saru Jayaraman, ROC's executive director. "This is not about money. It's about creating an economic model of a restaurant that does well — but not just for the owners, on the backs of the workers."