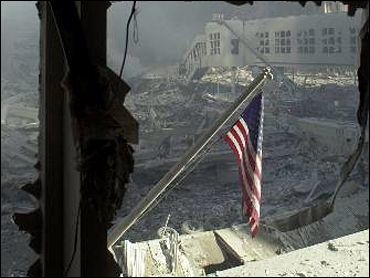 The final report of the Sept. 11 commission may answer some crucial questions about the nation's worst-ever terrorist attack, but one key query will remain: Whether the lessons of the 2001 attack spur actual policy changes.

The commission will release its final report Thursday at an 11:30 a.m. EDT news conference, the culmination of nearly 20 months' investigation — and the beginning of debate over where to go from here.

"The terrorist threat to the United States has not disappeared since September 11," said Lee Hamilton, the commission's vice chair. "Future attacks are expected. We hope that the president and the Congress study our recommendations with care and act on them quickly."

The report itself might not satisfy some family members who feel the commission has not addressed critical details about the attacks, according to a statement released Tuesday by the Family Steering Committee for the 9/11 Independent Commission, one of several organizations of victims' kin.

"While we believe that our concerns were acknowledged, we had also hoped that more of our questions and those of the American public would be fully addressed during the public hearings, or at the very least, discussed in the prepared staff statements," the statement read. "Yet today, many of our collective questions remain unanswered."

While noting progress since Sept. 11, the group contends that "many of the deadly mistakes and failures that contributed to the terrorists' success on 9/11 have yet to be corrected," adding later: "There is much work that remains to be done."

"We do not want the recommendations and findings of this report to sit idly on a shelf until after the next attack," it reads.

Commission members have already made it clear they don't intend to let their findings gather dust, reports CBS News White House Correspondent Bill Plante. An aggressive media campaign is planned to insure pressure on the White House and Congress to reform the system.

A major reorganization of the intelligence community and creation of a Cabinet-level intelligence agency are expected to be among primary recommendations.

On Monday, President Bush said he would await the commission's report before commenting on any proposals.

"Some of the reforms, I think, are necessary: more human intelligence, better ability to listen or to see things and better coordination amongst the variety of intelligence-gathering services," the president said. "And so we'll look at all their recommendations."

Acting CIA Director John McLaughlin said Sunday he thought there was no need for a Cabinet-level national intelligence chief. White House press secretary Scott McClellan said McLaughlin was speaking for himself, not the administration.

"The president is very much open to ideas that build upon the reforms that we're already implementing," McClellan said.

Former CIA Director James Woolsey, appearing Monday on NBC, said he supports the idea. When the position of director of central intelligence was created, he said, the country did not have several governmental agencies involved in that endeavor.

"I think a Cabinet-level official would be a wise idea," Woolsey said. "I wish people would stop calling him a czar. ... With all these other agencies, I think some coordination at the Cabinet level is probably a good idea."

Two members of the Senate Intelligence Committee — Sens. Saxby Chambliss, R-Ga. and Dick Durbin, D-Ill. — said they would be open to considering the recommendation for a new intelligence chief.

"When you take a look at how important intelligence must be for our future, you realize that the current situation is untenable," Durbin said on CNN. Chambliss cautioned against simply creating more bureaucracy.

The commission report also is expected to discuss any relationship between Iran and the al Qaeda terror organization.

Some of the questions that the family organization worry might not be addressed are: Why didn't Mr. Bush return to Washington immediately after hearing of the attacks? Why wasn't information about terrorists shared among federal agencies? What warnings did intelligence provide in the summer of 2001?

Neither Mr. Bush nor his challenger Sen. John Kerry, D-Mass., are likely to ignore the commission in an election year, especially given the timing of the report's release, just four days before the start of the Democratic National Convention in Boston.

But while the political atmosphere might generate attention for the commission's report, victims' kin worry that it might not lead to action.

"The 'vital dialogue and debate' that our elected leaders espoused has been cast aside because of election year politics," the families statement read.